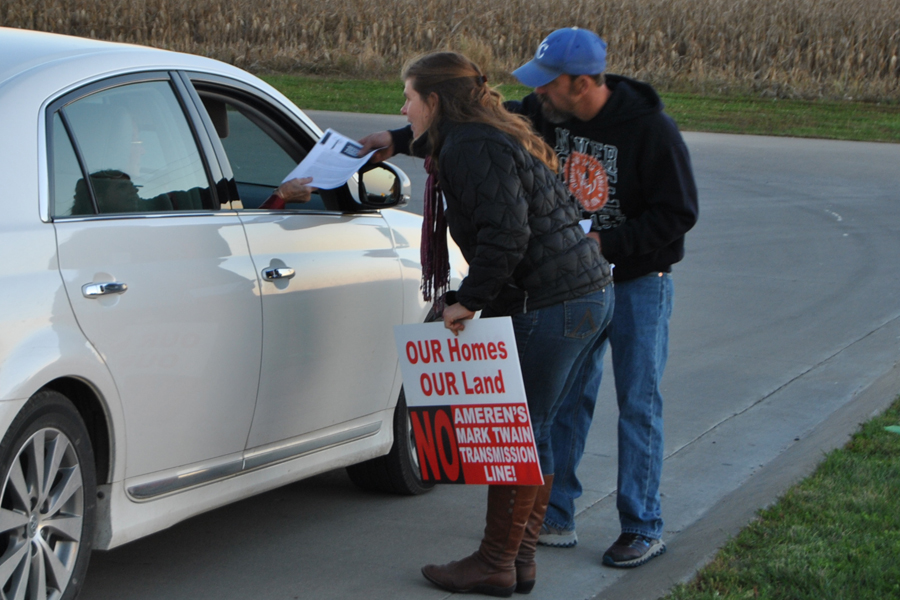 The following questions were posed to and answered by two members of Neighbors United, Northeast Missouri residents Teri Page and Julia Jack-Scott, by The Edina Sentinel reporter Echo Menges via an email interview. Neighbors United is a group that was formed in opposition to the Mark Twain Transmission Project by Ameren of Illinois.

These questions were emailed to the representatives by late Thursday afternoon, November 6, 2014, and received before noon the following day. the following questions and answers were printed in the November 12, 2014, edition of The Edina Sentinel.

What is Neighbors United?
Neighbors United is a group of concerned citizens and landowners who believe that the Mark Twain Transmission project is not in the best interest of Missourians. –Teri Page

How did the group get started?
In mid-August, a small group of affected landowners came together to support one another after receiving letters from Ameren.  The letters stated that Ameren planned to build a high-voltage transmission line through our homes and our land. We decided to hold an open house hoping to connect with other affected landowners. We also invited the press to publicly share our concerns about the Mark Twain Transmission  Project.

We were astounded when over 100 people attended, each of them sharing their story of how Ameren’s project would devastate their lives and their livelihoods. –Teri Page

How many people are involved in Neighbors United and which counties are they from?
About 200 people from Adair, Schuyler, Knox, and Shelby counties currently attend our meetings, and we have recently connected with many more concerned citizens from Lewis and Marion counties. –Teri Page

Is anyone in charge or designated as a leader of the group? If so, who? If not, why not?
While members of our group have stepped forward to assume leadership in certain areas, no one person is in charge. Decisions are made through a collaborative, democratic process, and the diverse viewpoints and experiences of our group make us stronger. –Teri Page

Is the Neighbors United approach to fighting the Mark Twain Transmission Project modeled after another group’s opposition to another transmission line project? If so, which one and why? If not what guidance are you using to organize yourselves?
Not necessarily, although we are grateful for information and guidance from the Block Grain Belt Express group in Central Missouri. They are a year and a half into a similar struggle opposing Clean Line’s proposed 200-mile transmission line that would run from St. Joseph to Hannibal, MO. –Teri Page

How is Neighbors United funded? Who pays for your signs and the printing of information handed out at meetings, newspaper advertisements and so on?
So far, funds have come exclusively from members of the group who have contributed their own money toward these needs. We also welcome donations to Neighbors United, sent to PO Box 583, Kirksville MO 63501. –Teri Page

How is the lawyer representing Neighbors United paid?
We hired Eminent Domain lawyer Paul Henry to intervene in Ameren of Illinois’ unprecedented lawsuit against the State of Missouri Public Service Commission (PSC).  They are suing for the pre-emptive right to use Eminent Domain without PSC approval for the Mark Twain Transmission Project. Fortunately, the judge ruled against Ameren, although they are appealing. The lawyer is being paid from the same group fund. –Teri Page

What is the goal of Neighbors United?

Overall, the goal of Neighbors United is to oppose this transmission line and to support affected landowners who come to us feeling overwhelmed with fear and frustration, and feeling that they have no voice or rights in this process.

As a group we have been trying to channel that energy into effective resistance action, and to research and provide real information, which we all believe we have not been getting from Ameren.

For example, at the first open house, we were told that “our property values could actually go up” as a result of having a high-voltage transmission line running through our land. Anyone with common sense can tell you that just isn’t true. We wanted to look into what the truth is for ourselves, from experts in their fields, not paid Ameren employees. -Julia Jack-Scott

How do you respond to the accusation that Neighbors United is using fear tactics to turn Northeast Missourians against the Mark Twain Transmission Project?

We have not heard that accusation, although I assume that it comes from Ameren Transmission Co. of Illinois.

We would argue that we are trying to get out the truth and reality of this project as best we can in a grass-roots way to counter their well-funded PR campaign of full-page newspaper spreads and constant radio ads. Remember, this is a Fortune 500 company wanting to transport electricity from miles away, through our state, and sell it at a premium in the East. Missouri will receive little benefit while their shareholders will make billions.

The people of Northeast Missouri do not need to be turned against the Mark Twain Transmission Project; they already know it is a bad idea. Already, we have overwhelming support from local citizens, business owners, elected local officials, as well as state representatives. We have thousands of signatures on petitions opposing the project, as well as four counties whose commissioners have formally voted to oppose the Mark Twain Transmission Project. –Teri Page

Do you agree or disagree the power grid infrastructure in our region (Midwest) needs to be improved and expanded?

Ameren’s PR team would like us to believe that reliability is a main driver of this project, but our Midwest grid is already robust. How often do we experience blackouts here? Never. The very fact that the transmission line is transporting energy from point A, Iowa, to point B, Indiana, clear over Missouri means that this is not intended to boost Missouri’s grid reliability.

As we have been researching the real story behind this transmission line, several reasons other than grid reliability have become clear. MISO (Midwest Independent System Operators), the authorizing organization behind this and many other transmission line projects in our area, has stated on their website that “their healthy reserve margins” have dipped below acceptable levels, especially in the face of new carbon-emission standards. Their solution is to encourage and authorize energy company members like Ameren to create new transmission lines that will buy energy cheaply in one area and sell it for a considerable profit in other markets. –Julia Jack-Scott

One of the first things that Neighbors United did was to form a health committee to look into the real health consequences of Electro-Magnetic Fields (EMFs) from high-voltage transmission lines. The committee is made up primarily of heath professionals and we have been fortunate to have access to AT Still University’s medical library. We have read through countless studies and all 300 pages of the World Health Organization’s publication, summarizing worldwide research on EMF health impacts.

What we have discovered is troubling to us. The strongest links consistently point to an increased rate of childhood leukemia (a form of cancer) in children living in close proximity to lines. There are also concerns about increased rates of miscarriage as well as draining batteries in pacemakers. Anyone can read the WHO’s overview for themselves and decide how comfortable they feel living and working close to a line. It is published in full at http://www.who.int/peh-emf/publications/elf_ehc/en/

The International Agency for Research on Cancer (http://www.iarc.fr/) has classified EMF as a “possible carcinogen,” meaning that it possibly causes cancer. Ameren has been telling us the opposite, but the science speaks for itself. –Julia Jack-Scott

What is the group’s number one concern about the Mark Twain Transmission Project?
Ask five different members of our group and you might get five different answers, as each of us is affected in a different way.  Our primary concerns are: devaluation of property, the potential abuse of eminent domain by an out-of-state private corporation, adverse health effects, destruction of farmland, forests, and hunting grounds, loss of livelihood, the routine spraying of herbicides under transmission lines, and the simple fact that a line going over our homes will make them unlivable.

To Ameren, we are dots on a map on their route to greater profit, but these are our homes, our properties, and our dreams for the future.  –Julia Jack-Scott

Do you have a website people can visit to learn more about Neighbors United? What is it?

How can people learn more about Neighbors United?

To learn more about Neighbors United, you can either join our Facebook group, send us an email at noamerenpowerline@gmail.com, or attend our weekly meetings. Our next meetings will be on November 10that the Adair County Annex, and on November 17th at the Cornerstone Church in Kirksville.  Meetings start at 7pm. –Teri Page

What is the next step Neighbors United is taking in the fight against the Mark Twain Transmission Project?

We are very grateful for the support of our local elected officials and other concerned citizens, and we will continue to build our grass-roots network of people who are opposed to the Mark Twain Transmission Project.  While we are taking many steps forward, our priority right now is to reach affected landowners and let them know that they do not have to sign any easement agreements that Ameren presents. –Teri Page