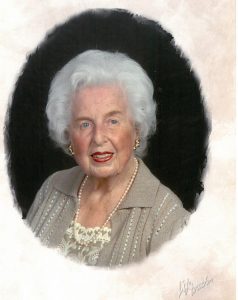 She graduated from Edina High School In 1937, attended Oklahoma College for Women (in Chickasha) for one year, then finished her college education in 1942, obtaining a Bachelor of Science in Education from Northeast Missouri State Teachers College (now Truman University) in Kirksville, Missouri.

After spending some time as a secretary to the Dean of Music at LSU in Baton Rouge, Mary Beth came to Oklahoma City in 1945 and took a secretarial position with the Oklahoma City Chamber of Commerce where she met her husband of 62 years, Arch Jack.

Mary Beth worked at the Oklahoma City Board of Education, the Oklahoma Education Association, and taught at Hoover Junior High School when it first opened.  She retired from Kerr McGee Corporation in 1983, then for many years worked alongside her husband Arch at the Oklahoma Health Center Foundation.

A longtime member of Westminster Presbyterian Church, Mary Beth sang in the chancel choir and was a member of the handbell choir.

Mary Beth’s main joys were her family, music, and tennis.

She is survived by her son, Duff Jack of Oklahoma City; son, David Jack of Denver; daughter, Barbara Sobol of West Virginia; niece and nephew, Martha and Gary Trunnell of South Carolina; nephew and niece, Roger and Kate Jack of Oklahoma.

Services were held on September 25, 2014 at 10:00am at Westminster Presbyterian Church.  Memorial donations may be made to the Presbyterian Health Foundation.