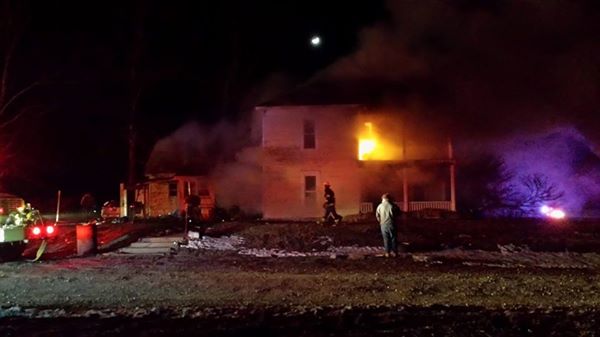 A home in the northwest Knox County was destroyed by fire Monday night, February 23, 2015. The home was located on the McFarland Farm northeast of Greensburg near the Scotland County line.

According to the Chief of the Baring Volunteer Fire Department, Richard Witherow, he was alerted about the fire by the Macon County E-911 Center, which dispatches Knox County 911 calls, at 9:25 p.m.

Upon arriving to the scene Witherow and Assistant Chief Loren Huber asked the center to call for mutual aid from the Rutledge Volunteer Fire Department and the Edina Fire Department.

Two men at the house got as many things out as possible. Eventually it was decided the structure was too far gone to continue fighting the fire.

“It got to the point where there wasn’t anything to salvage and we let it burn,” said Chief Witherow. “It was an older house – a great big old two-story house. It was a total loss. No other structures were damaged.”

According to Witherow, the fire started in a corner where electricity was running into the structure.

Firefighters remained on scene until well after midnight.