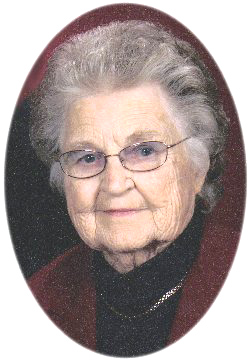 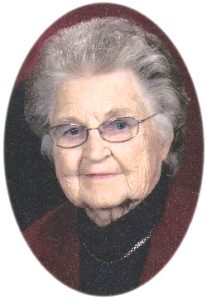 Born on February 15, 1923, north of Canton, Missouri, Georgena was the daughter of John Herman and Elsa Abney Hudnut Hart.

At the age of three, her family moved to Knox County, Missouri. She had attended school in Palmyra, Newark, Steffenville and finally Oklahoma Rural School.

On March 1, 1941, in Edina, Missouri, at the Methodist Parsonage, Georgena united in marriage with Robert Monroe Hayes.

Georgena and Robert enjoyed farm life, raising four children, on the farm east of Edina, before retiring and moving to Edina in 1995.

Funeral Services were held March 6, 2015, at the Doss Funeral Home in Edina, Missouri.

An expression of sympathy in memory of Georgena Hayes may be left to the Knox County Nursing Home, or the Knox City Cemetery. A memorial may be left at or mailed to the Doss Funeral Home 208 N. 4th Street, Edina, Missouri 63537.