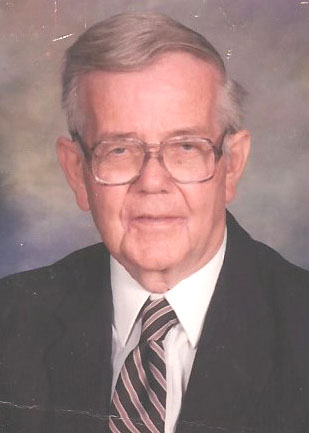 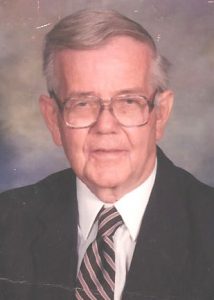 Eugene J. Croarkin, Sr., of Kirksville, Macon and Edina, Missouri, left this world at 94 years of age, on March 31, 2015. He was born February 25, 1921, in Fort Worth, Texas, the son of Ralph and Ruth (Wright) Croarkin. At the age of 5 by court decree he was given to Aunt Emma Corine Croarkin, who lovingly raised him as her own “Buddy Boy” and remained under her care through 9 years of school at the Immaculate Catholic School in Macon, through his graduation from Macon High School, in 1939.

On May 3, 1942 he was united in marriage with Peggy Ficken at the Immaculate Conception Church in Macon and she preceded him in death after 54 years of marriage.

His life was mixed with a variety of happenings. At age 15, he rode his bicycle from Macon to Chicago by himself to visit his mother, wearing the seat of his pants out by the time of his arrival. He attended Wright Junior College in Chicago for 1 year, worked for the Western Union as a messenger in Chicago, and later worked as an accountant for the Jewel Food stores in Chicago. He entered the armed service in World War II where he spent one year in the states training, one year in the country of Wales, and one year in the five campaigns of Rhineland, Central Europe, Ardennes, Northern France, and Normandy. He served as the rank of sergeant in the 28th Infantry Division receiving five gold stars for his five major campaigns and a combat infantry badge. Eugene received his Bachelor of Science Degree in Business Education at Northeast Missouri Teachers College in 1949, using the help of the WW II GI Bill; he also received his Master’s degree in Business. This started his 50 year teaching career of one year at Sturgeon Missouri High School, two years at Bluffs Illinois High School, one year in the city of St. Louis High School, 32 years as an instructor and professor of accounting, assistant, and associate professor at Northeast Missouri State University, one year at Indian Hills Community College, and 13 years at Buena Vista University as the instructor at the Ottumwa campus. He was known for his knack of never forgetting a student’s name after he learned it the first day of class.

Throughout his teaching career he attended UCLA in Los Angeles and University of Missouri at Columbia during summer sessions to keep updated in changes taking place in the business world. His favorite business discipline was tax; over the years he prepared many tax returns for people in the community, mainly to enhance his teaching tax accounting, which he taught many times at the university level. He was known for his love of big band music, coffee, and a good tax return; he always said it was like solving a puzzle.

To many people he was known as Grandpa Corky. His house was grand central station, with an open door policy, where he acquired many honorary family members over the years. From teaching the art of paper air plane making to going in circles on the merry-go-round, he played a pivotal part in every child’s life he came in contact with. He was also a regular at Leo’s Roller rink, skating frontwards, backwards, and doing the hokey-pokey, where he turned himself around. Eugene was preceded in death by his wife of 54 years, Margaret “Peggy” Ficken Croarkin, beloved Aunt Emma “Corine” Croarkin, mother Ruth Wright Croarkin Chirinos Miller, father Ralph Croarkin, and sister-in-law Shirley Ficken.

He is survived by “his girl” Virginia Hudson of Macon, Missouri; half-siblings Mary Croarkin Harris of Kansas City, Missouri, and Charles Croarkin of Sedalia area; brother-in-law Homer Ficken of Fort Worth, Texas; and his cousin Sue Gibilterra, as well as several nieces.

Eugene selected musical pieces to be performed: Ave Maria, “I’ll Be Seeing You” performed by Suzanne Howerton, and a musical piece played on the flute by John Croarkin.

Visitation will be held after 4 p.m. Friday April 3, 2015, in the Davis-Playle-Hudson-Rimer Funeral Home in Kirksville, MO with family receiving friends from 6:00 p.m. to 8:00 p.m.

A Prayer Service will be held the night of the visitation at 6:00 p.m.