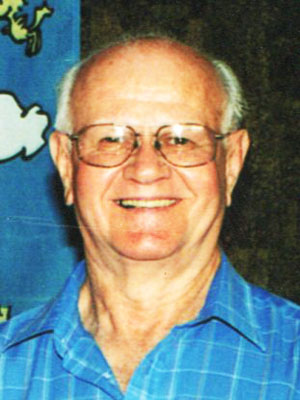 Charles Dean Carlson, 86, East Moline, formerly of Hampton, Illinois, died June 26, 2015 at home after a lengthy battle with pulmonary fibrosis.
Charles was born on November 30, 1928 in Cantril, Iowa, the only son of Hilmer and Florence Black Carlson. Charles spent his early years around Memphis, Missouri, where he worked on his father’s farm. He married Betty Hulen in Kahoka, Missouri on August 19, 1953.
Charles was an Army Veteran, having served during the Korean Conflict from 1952 to 1954.
He was preceded in death by his parents; a sister, Hazel Welsh; one nephew, David Lynn Rood; and four brothers in law, Tony Welsh, Dale Rood, Ronald Hulen, and Eldon Hulen.
He is survived by his wife, Betty; a sister, JoAnn Rood, Memphis, MO; and four nieces, Deb Whitehurse, Columbia, MO; Jan Summers, Kahoka, MO; Deanna Rood, Kirksville, MO; and Robin Sappington, Queen City, MO.
Share a memory or condolence at www.paynefuneralchapel.com.
Per his request he was cremated and a private inurnment with military graveside rites being provided by the V.F. W. Post # 4958 of Memphis will be Friday, July 3, 2015 in the Memphis Cemetery, Memphis, Missouri. Officiating the committal service will be Brother Jack Sumption.
An expression of sympathy in lieu of flowers may be made to the donor’s choice in care of the Payne Funeral Chapel, 202 E. Madison St., Memphis, MO 63555
Arrangements are under the direction of the Payne Funeral Chapel in Memphis assisted by the Gibson-Bode Funeral Home, Port Byron, IL.