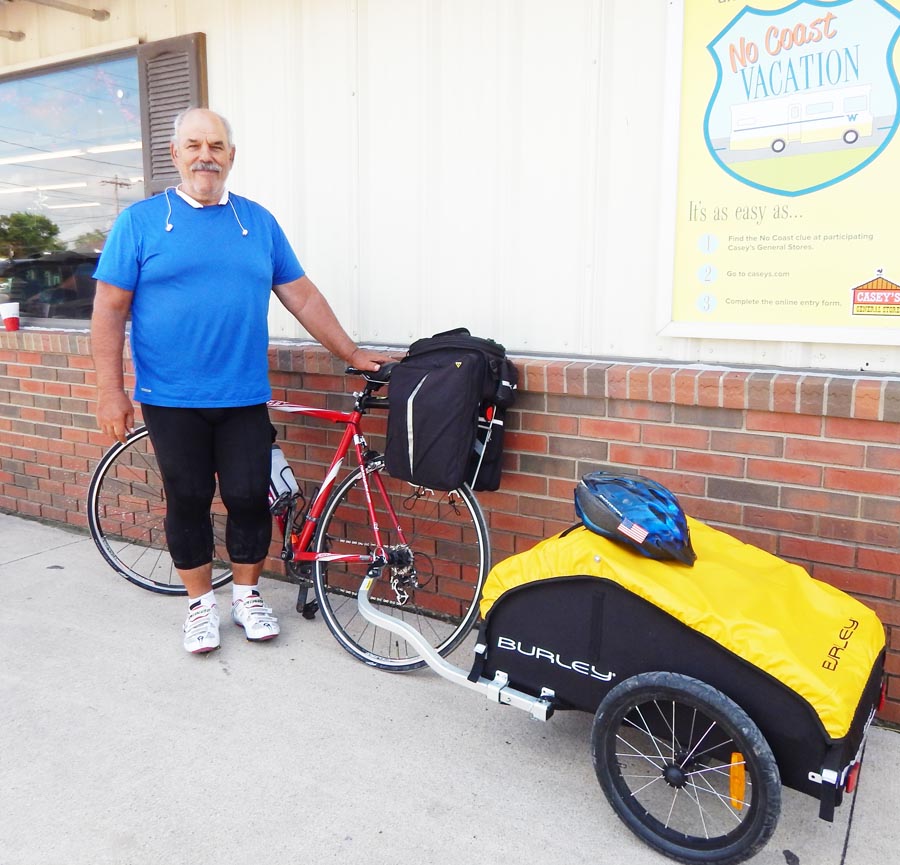 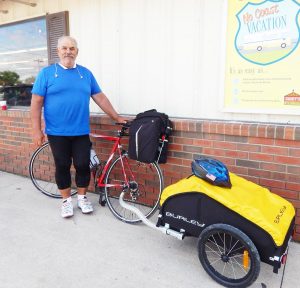 Tom L’Italien was in Kahoka on Thursday July 9 on his 3,000 mile bicycle ride across America to bring awareness to veteran’s issues such as suicide. It is reported that 22 veterans die each day of suicide.

On Thursday, July 9th, Tom L’Italien stopped at the Casey Store in Kahoka to stretch his legs and take a break from his bicycle trip across the United States.

There is nothing special about his stopping in Kahoka as his is not the first nor will he be the last to travel across the United States via a bicycle, but his reasoning for making the trip is very special.

Tom picks up the story at this point, “In 2013 I was in bed when I felt the Holy Spirit speak to me about making a bicycle trip across America to make people more aware of veteran suicides. When my wife woke up I told her what I felt compelled to do and asked her what she thought. Her response was, “It looks like you’re making a bicycle trip!” So this is what I am doing and have made several trips. That first year I left from Flagstaff, Arizona and went to Boston, Massachusetts. This ride began on June 15th in Provo Utah and will end in Augusta Maine, which will be a ride of about 3,000 miles . I am riding for several causes to do with veterans. The first is to reduce or eliminate veteran suicide that is happening to both veterans and family members. I’m also riding for ALIVE (Advocacy for Life In Veteran Empowerment). We are also working on creating a Veteran Village in Colorado where veterans can go to get rehabilitated and learn job skills in order to be more equipped to get back in to a normal life. And finally we are working on making a Statue of Responsibility which will be a veteran’s statue in California the same size as the statue of liberty.

L’Italien is the founder and CEO of The Team Veteran Foundation. According to it’s website www.ttvfoundation.org, “The Team Veteran Foundation is founded on the principle that freedom is not free and that it is TTVF’s responsibility as an organization to serve those that have fought with valor for our country; those who have returned home and continue to suffer far greater than we can imagine. We recognize that this great nation has stumbled with the care and commission of its veteran community. TTVF embraces our responsibility, as free citizens, to serve our veterans with excellence, honor, dignity and integrity. TTVF stands ready to make the necessary sacrifices to this end, upholding our slogan “We’ve Got You” because we believe that the words homelessness, suicide and veteran do not belong in the same sentence. One homeless veteran or veteran suicide is one too many.”

According to statistics each day 22 veterans commit suicide in America. This means that since 2001 we have lost 100,000 veterans. There have also been another 50,000 family members also take their lives bringing the total to 150,000 since 2001. If you would like to assist L’Italien on his quest you may contact his website and you can find ways which you can help.

When L’Italien was asked if he were a veteran, He responded, “No, but I know where my freedom comes from!” L’Italien lives in Sun City, Arizona.