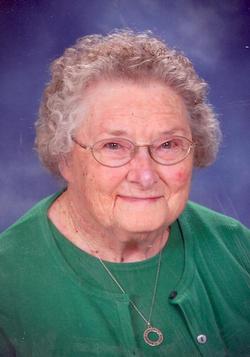 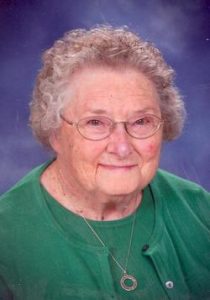 Born on August 12, 1917, on a farm Southeast of Edina, Missouri, Margaret was the daughter of James Patrick and Mary Mabel Kriegshauser Clark.

Erma was a member of Queen of Peace Catholic Church in Ewing, Missouri, where she taught CCD classes for several years was on Parish Council and was a member of the Ladies Sodality.  She was a member of the Williamstown Wednesday Extension Club until they disbanded.  Her hobbies included cooking, sewing, gardening, writing poetry and spending time with family and friends and her cat, Phoebe. She was also a 4-H leader for many years.

Survivors include her daughter, Mary Margaret (Margee) Marsot of Canton; one sister, Edith Welch of Trenton, Missouri; two sisters-in-law, Beulah Marsot of Keokuk, Iowa, and Marie Clark of Edina, Missouri; and several nieces and nephews.  She was preceded in death by one brother, Lawrence Clark; two sisters, Leona Moore and Rita Miller; a sister-in-law, Kathleen Van Meter; and a brother-in-law, Edward Marsot.

Burial was in Queen of Peace Cemetery, in Ewing.