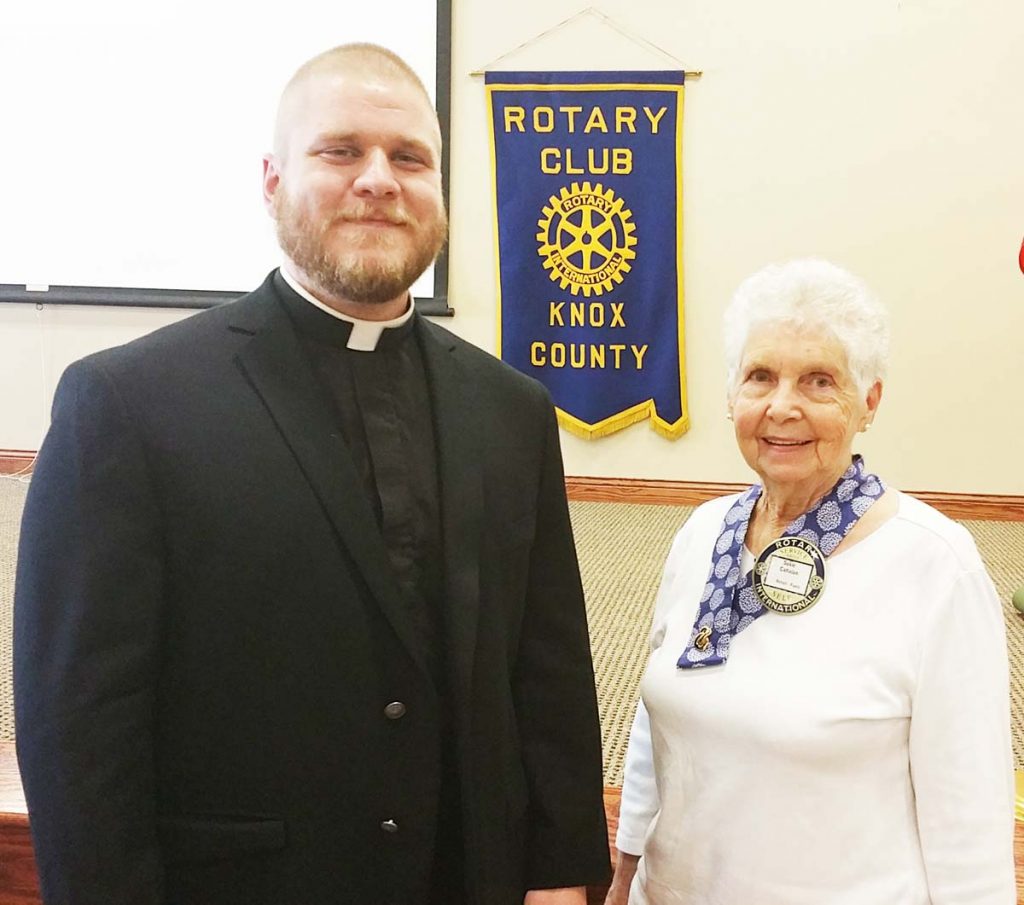 On Thursday, August 6, 2015, the new St. Joseph Parish Priest, Rev. Colin Franklin, visited the Knox County Rotary Club and addressed the crowd during their lunchtime meeting at the Knox County Community Center. He was the special guest of club member Susie Cahalan. Rev. Franklin told the group about his life before coming to Edina and his journey to priesthood.

Rev. Franklin was born just outside of Little Rock, Arkansas, to Bill and Susan Franklin in 1985. He is the third born of seven children. His father was in the Air Force and the Franklin family lived all over the country while Rev. Franklin was growing up including Arkansas, Alaska, California, Ohio and Oklahoma.

“After a while this idea of the priesthood kept sneaking back up on me,” said Rev. Franklin. “What kept me from facing or thinking about it was more fear than anything. It was this weird place where I kinda felt like God wanted me to do it, and I really felt like I didn’t want to do it. Those two things were a struggle within me.”

Rev. Franklin was home with his parents over a Christmas break from college when God’s call became overwhelming and he had his the first conversation “out loud” about becoming a priest with his parents. He had under two years of college left to get his degree in Engineering and decided to finish and applied to the Diocese in Jefferson City for Seminary College.

“I knew Missouri and I loved it so I applied to Jefferson City and they said – alright. They sent me up to Conception Seminary College north of Kansas City. It’s a Benedictine Monastery in the middle of nowhere,” said Rev. Franklin. “Going straight from being an under grad at Rolla to living with a bunch of other seminarians and monks in the middle of nowhere was a bit of a culture shock. That’s the point of it – to take a step back from yourself and be reformed.”

During his time at Catholic University he spent a period every summer in Mexico learning and honing his Spanish speaking skills.

“After four years there, three years ago in 2012, I was made a priest in Jefferson City at the Cathedral and assigned to one of the parishes in Jefferson City, Immaculate Conception,” said Rev. Franklin.

One year later he was assigned to St. Peter Church next to the Capitol where he worked as an Assistant Priest and took on Spanish speaking assignments.

“I was there for two years from 2013 until this July,” said Rev. Franklin. “I’ve always thought about a small parish. Maybe a small school.”

He is assigned to St. Joseph in Edina, St. Aloysius in Baring, St. John in Memphis and the Newman Center at Truman State University.

“I began piecing it together,” said Rev. Franklin. “I began to get pretty excited. I had heard of Edina because of your church here and what you guys had been through. It’s known far and wide – The Cathedral of the North.”

Rev. Franklin moved to Edina in July and has been getting to know his parish over the last several weeks. He credits the helpfulness of the community for making his transition smooth.

“I’ve found the people to be wonderful,” said Rev. Franklin. “The community has been very welcoming.”