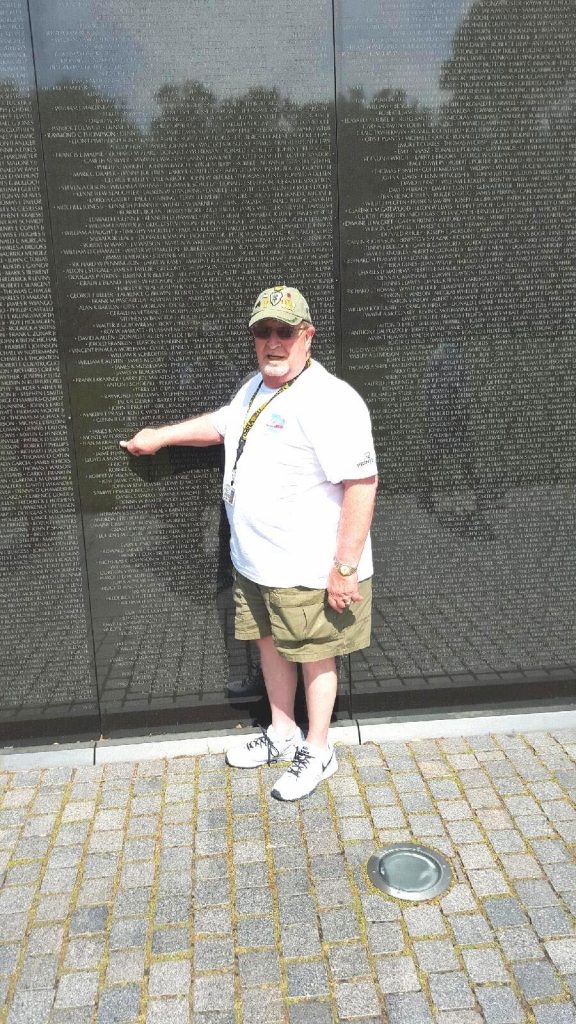 Our veterans who have participated in the Great River Honor Flight have all returned home with memories that will last the remainder of their lives. For some it will be how smooth things went, how well they were welcomed, or struck by the beauty of the memorials of Washington D.C.

All those things were mentioned by Rodney Smith, who returned two weeks ago from his Honor Flight, but what he found in D.C was much more than that. He didn’t say as much, but those of us who know Rodney well and hear him speak of the trip know that he found some healing of old wounds as well. The United States will never now what we did to our Vietnam veterans by the contrast of other veterans returning home who were received as heroes.

Rodney was in the Army for 19 months, three weeks and four days. He served in Vietnam with the 25th Division.

When asked about his duties he responded, “I carried a rifle and obeyed orders. I do not talk much more than that about my service because it doesn’t accomplish anything or change anything…it was what it was and that’s all it ever will be! To be perfectly honest I probably suffer some with PTSD (Post Traumatic Stress Disorder). Back when I was working and running a business, I was too busy to have much time to think but after retiring I have had memories come back that I haven’t had for some time. However, on this trip I did meet five fellows from the Monroe City as well as the LaGrange area who were also in the 25th Division. We quickly got together and began talking about such things as who you were with and your experiences. I talked and they talked about things we had never spoken of since we had been home from our service, which was fifty years ago. We all welled up with tears, because we finally got to talk to someone who understood what we had went through. For me visiting with those fellow members of the 25th Division was the highlight of the trip! We were inseparable from that time on. It helped me tremendously to be able to talk to those men. We exchanged phone numbers and email addresses.”

In checking the history of the 25th Division in Viet Nam, this is what I learned from the 25th Division’s website: ”
“Operations in Vietnam
From 1966 to 1970, the Division’s main area of operations was the area north and west of Saigon where it repeatedly fought North Vietnamese Army and Viet Cong units in the Iron Triangle area.

Later that summer, in operations in Cambodia and around Tay Ninh city North West of Saigon, the division
inflicted over 2,000 casualties on the enemy and almost completely destroyed eight PAVN regiments. Indeed, the Tropic Lightning Division always defeated any enemy unit if faced, and the litany of engagements from its service in Viet Nam reads like a list of many of the war’s famous battles: Cedar Falls, the Iron Triangle, Cu Chi, the Ho Bo and Boi Loi Woods, Tay Ninh, War Zone C, Ben Cui and Cambodia. In one of the division’s proudest moments, it successfully defended Fire Support Base Buell for four days and nights, often fighting at point blank range. All told in Viet Nam, the division served in combat for 1,716 days, participated in twelve campaigns, and once again received numerous awards. Twenty-one soldiers were awarded the Medal of Honor and 4,561 Tropic Lightning soldiers were killed. 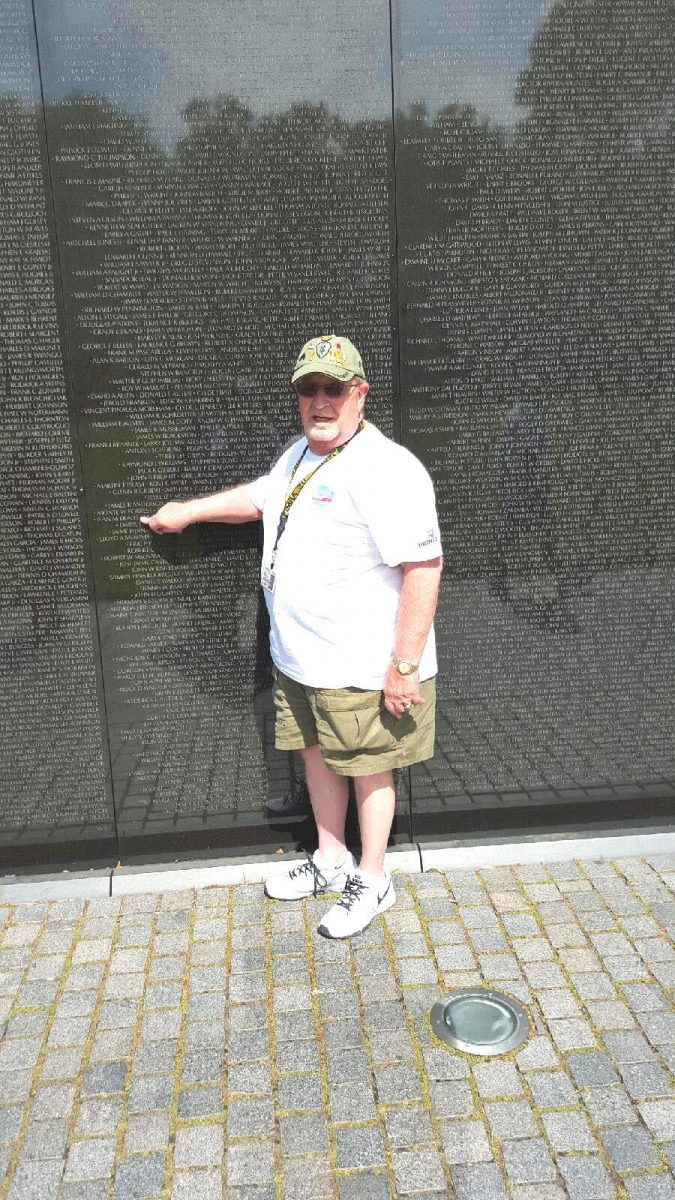 Rodney Smith points to the name of his school friend (Jean M. Kraus) whose name appears on the Vietnam Memorial Wall in Washington D.C. Rodney left a basketball photo of the two taken while they were in school together.

As far as how the rest of the trip went, Rodney stated that it was remarkable! He continued, “ When we arrived at Baltimore there were two fire trucks waiting and they shot water over our plane as a salute. At the airport, there may have been 200 military people present all in their dress uniforms, along with perhaps another 300 civilians to greet us. They shook our hands and patted us on the back and because we had an hour layover we were able to visit with a great many of those folks. That was not the greeting I received when I came home from Vietnam. From the airport we went to the Korean War Memorial and then the WWII Memorial before going to the Vietnam Memorial. I spent a great deal of time at the Wall (Vietnam Memorial). I have a good friend (Jean M. Kraus) on the Wall. We started the first grade together and all through school with him. I also had several other people that I had served with whose names are on that Wall. It was a very emotional experience. There were people that were laying things at the Wall in front of the names of their lost loved ones. I left a picture of my friend and I in our basketball uniforms. We also went to Arlington National Cemetery and saw the changing of the guards, which is very impressive. We had three WWII veterans and one Vietnam veteran who got to lay the wreath at the Tomb of the Unknown Soldier, which is something that you normally only see a president do. It was unbelievable and brought tears to a great many people. The Iwo Jima Memorial was just breathtaking. It was just a tremendous trip and there are not enough adjectives in the English language to describe it. But I will add that it was a very emotional trip. I was up for about 25 hours, but I was probably more drained emotionally than physically.”

My son Scott was my guardian on the trip so that was very special. I also think he came away from the trip with an entirely different understanding of the military.

I would certainly encourage any veteran who hasn’t made the trip to do so. It was just a remarkable trip and they were prepared for anything and had wheelchairs available to get on and off the plane as well as the buses. We had some older vets as there were some WWII veterans so the assistance was appreciated. All us veterans are getting older and I would apply now as it took me over a year to get approved to go. One of us on the trip was the 1,000 veteran to make the Honor Flight. They added that they knew which one of us it was, but wouldn’t disclose it because they wanted each of us to think that we were the 1,000. But those involved in the trip bent over backwards to see that we were well taken care of.”