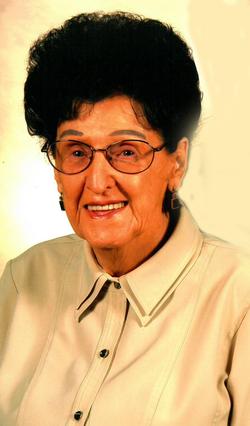 Born December 9, 1916, in Reger, Missouri, Pauline was the daughter of Clarence and Maude (White) Yardley. She was a graduate of the Knox City High School Class of 1934.

Pauline Yardley united in marriage with Marshall Schofield of Edina, Missouri, on October 19, 1935, in Hannibal, Missouri.  In 1946 the couple became co-owners of Edina Implement and he was a commissioner of the special Edina Road District.  Marshall preceded her in death on January 4, 1996.

Pauline Yardley Schofield was united in marriage to Sherman Barr on April 13, 2002 in Macon, Missouri.  She was a member of the United Trinity Church of Macon. She enjoyed traveling, cooking, helping with missions, especially with the children, going to Texas with Sherman, and loved being with her family.

She is survived by her husband, Sherman of Macon; a special niece, Yvonne Ibarra, three step-children, Russell Barr and his wife Carol of Paris, France, Karen Tabor and her husband Donald of Thayer, Missouri, Renee Sikes and husband Kenny of Blue Springs, Missouri; seven step-grandchildren; seven step-great-grandchildren, and other special nephews, nieces, and in-laws.

Pauline was preceded in death by her parents, her first husband Marshall, twin brother Paul Yardley, and one sister Genevieve Hoselton.

Funeral services will be Thursday, October 8, 2015, at 11:00 am at the Hutton & McElwain Funeral Home in Macon with Rev. Mike Birdsong officiating. Graveside services will be at 3:00 pm at the Grandview Burial Park in Hannibal, Missouri.  Visitation will be Thursday morning from 10:00 am to the time of service at the funeral home. Memorials can be made to the United Trinity Church in Macon, Missouri.