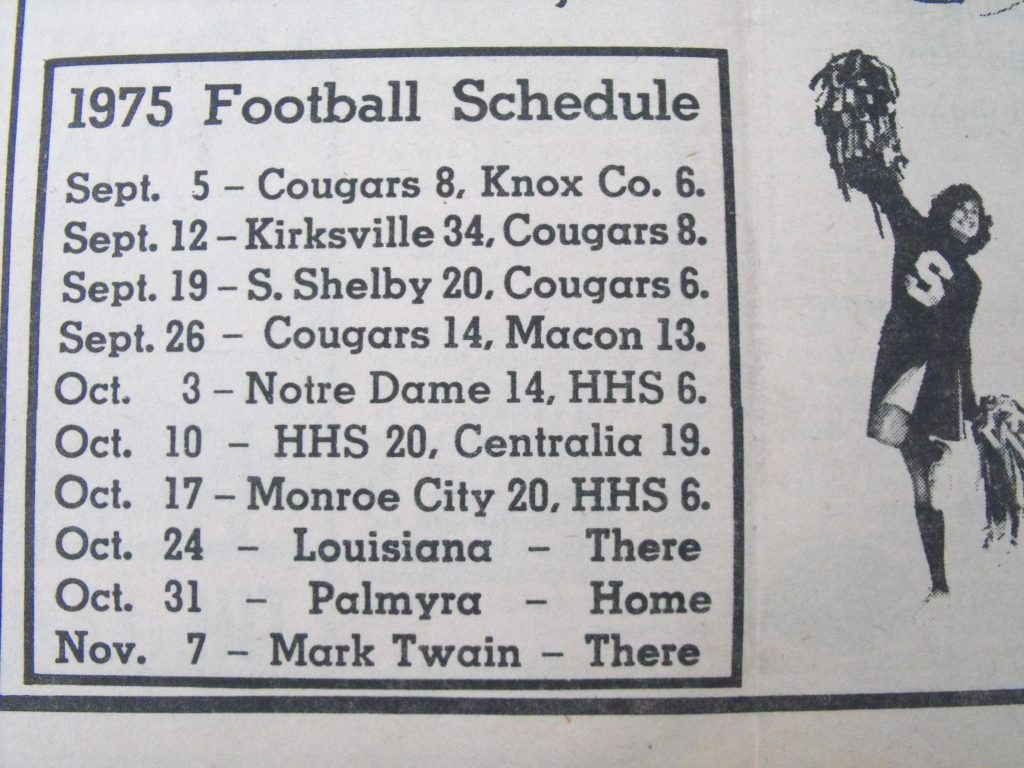 Looking Back Through The LaBelle Star

THURSDAY, OCTOBER 1, 1880 – KNOX CITY – Death Mr. George Hon died at his home in Knox City last Thursday night, after an illness of two weeks.  He leaves a wife and two children to mourn his death.  His remains were carried to the county line cemetery, east of Knox City for burial.

WED – Mr. Joe Burton and a Miss McGee, both of Knox Count y, were married by Rev. B.F. Northcutt last Thursday night, about half past ten o’clock.  The contracting parties were expected at 5:30 in the afternoon of that day, but for some reason did not appear until the “queen of night” had almost reached her zenith, and our citizens were all in slumber.  After a few strokes of the doorbell at the residence of Mr. Northcutt, the “would-be-groom” succeeded in arousing  the clergy who soon pronounced them husband and wife.

SCHOOLS – Lewis County has seventy-nine school districts and eighty-five public school buildings; to this we might add one university, on college, one academy, and several private schools of minor importance.

THURSDAY, OCTOBER 8, 1885 – LABELLE – Jack Frost done things up white Saturday night, October 3.  He seems to be as frisky as ever!

DEATH – Wednesday morning we received a telegram from Chicago bearing the sad intelligence that a sister was dying.  Our brother, G.B. Mulinex and wife, started on the first train for that city.

Colony – Josiah Beigle has passed away.

FRIDAY, OCTOBER 11, 1895 – THE STAR – This week the STAR launches out on its thirteenth year, the present owner being its founder.

DEATHS – P.L. Gregory, one of LaBelle’s aged citizens, died this morning at 5 o’clock after a short illness.  Funeral services at 2 o’clock tomorrow.

County Corner/Lewis-Knox-Clark – A young man named Naughton, living near Colony, was thrown from his horse and killed one day last week. The same day a similar accident occurred near Rutledge, but we failed to learn the young man’s name.

CORN CROP – Hugh Florea, holds the banner as the champion corn raiser in this section. He has left two ears at this office that measure 15 ½ inches and 15 inches respectively.  If there is any man on the top of Missouri’s fertile soil that can make a better showing than this let him come forth.

WOOD – Wood is cheaper in this market this fall than ever before, the prices ranging from $1.50 to $2.00 per cord.

WED – At the home of the bride’s parents, near LaBelle on Wednesday, Oct. 9, Mr. J.P. Yard, of Macomb, Ill., and Miss Stella Carmack.

FRIDAY, OCTOBER 15, 1915 – LEWISTOWN – Sometime Sunday night the O.K. Depot at Lewistown was entered by burglars who carried away a lot of stuff, but nothing of any great value.  Owing to the small loss it is surmised that the perpetrators of the theft belong to local talent.  The loss was confined to small packages of freight and express, mostly consigned to local merchants.  The out of town merchants who lost goods are Leslie & Son of Monticello, and Ed Marsot of Williamstown.  No clue has been found that will lead to the arrest of the guilty parties.

Roy Briscoe, son of W.D. Briscoe, while at the farm of his father near town was injured Saturday.  In attempting to stop a team that was running away he was knocked down and the loaded wagon ran over his body from his feet to his head.  He came out alive and the attending physician says that he will soon be as good as ever after broken ribs, collar bone and wrist bone knit together.  Aside from broken bones he was severely bruised about the body, but the wonder is that he escaped with his life.

DEATHS – Charles Arment and wife of Deer Ridge were called to Rutledge Wednesday to attend the funeral of Mr. Johnson, who was killed while attempting to get off a moving train.  Walter Dare took them in his auto.

Mrs. Ruth Wright, the aged wife of Dr. Wright and one of our oldest citizens, passed away Sunday afternoon at her home, west of town.  The remains were laid to rest in Colony Cemetery.

We are sorry to hear of the tragic death of Miss Anna Whaley, youngest daughter of James Whaley and wife of Oklahoma, but formerly of this neighborhood, Lime Kiln. While lighting a coal oil stove, she spilled some coal oil on her clothing, which caught fire and could not be extinguished until too late to save her life.

FRIDAY, OCTOBER 19, 1945 – Men in Service – Cpl. John Runyon, of Jefferson Barracks is enjoying his first furlough since entering service three and a half years ago, arrived at the home of his parents, Mr. and Mrs. Homer Runyon of near Lewistown, Sunday.  Mrs. Runyon who has made her home with her parents, at Deer Ridge is a guest in the same home.  A son-in-law of Mr. and Mrs. Homer Runyon, Pfc. Rollie Florea, who has been in the South Pacific, is on his way home.

A number of Monticello folks attended the memorial service Sunday in Lewistown for Pfc. William Turpin, who was killed on Luzon on March 15, 1945. The Turpin family formerly lived a few miles north of Monticello.

FRIDAY, OCTOBER 14, 1955 – Death – David Edgar Hustead, 78, passed away October 11, in a Kirksville Hospital.  He was the grandfather of the wife of Selbourne Skirvin, LaBelle’s Mayor, and the father of Granville Hustead, well-known Colony merchant.  Mr. Hustead was born near Gorin and was married in 1896 to Tempa Harr, who survives with seven children, 25 grandchildren, 19 great grandchildren and a brother.

Mrs. and Mrs. Alvin Sharpe are the parents of a girl born in Gibson Hospital, Edina, Mo., Sunday, Oct. 6.

Mr. and Mrs. Larry Pape are the parents of a baby girl born Monday morning, Oct. 17, at Blessing Hospital, Quincy, Il. Her name is Elizabeth Anne and she weighed 6 ¾ lbs.

WEDNESDAY, OCTOBER 15, 1975 – FOUND – Mrs. Vance Morrow lost her engagement ring about 26 years ago while she and her sister-in-law, Mrs. Betty Brocksmith, were pulling onions in the Morrow garden.  A frantic and prolonged search was conducted.

A few days ago while walking across that particular area which is now a hog lot, Mr. Morrow spotted the ring.

Following a cleaning and shining, Mrs. Morrow reports the ring is as good as new. 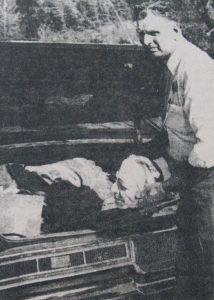 Bank teller Helen Chambers said she saw the car park on the east side of the bank and a few seconds later the two masked men walked in. One carried a silver plated revolver and the other a sawed off small caliber gun.

Teller Mary Kay Morrow was instructed to open all the cash drawers. The thief removed all the currency and stuffed it into what appeared to be a green duffle bag. Miss Morrow was then told to go into the vault and open the safe.  She told the gunmen that none of the women could open the safe, only Mr. Huebotter knew how.  The robbers then had him get the money. Again only currency was taken,

The employees, Miss Morrow, Mrs. Chambers, Marsha Hutcherson, and Huebotter, and a customer, Audrey Richardson who had entered the bank while the robbery was in progress, were told to go into the vault.  All, except Mrs. Chambers were made to lie down on the floor.  The gunmen let Mrs. Chambers sit in a chair “in respect for her age”. The bandit tore a telephone off of the vault wall and attempted to close the door, however, he was unable to get the door to close. The employees were instructed to remain in the vault and the robbers fled in a car east on Hwy 6.  (TO BE CONT’D.)

The Highland High School Cougars were taking on some seasoned football teams in the fifth year of Lewis County C-1 Schools. 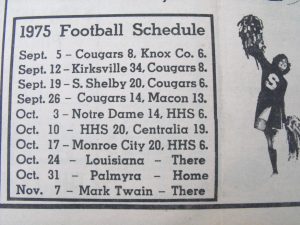