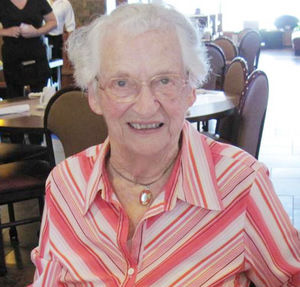 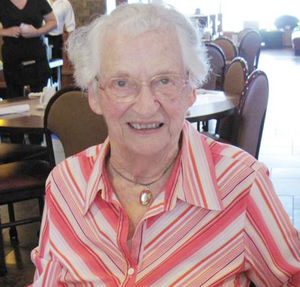 Madeline Phillips, 95, of Kankakee, Illinois, passed away Friday (Sept. 25, 2015) at Presence Our Lady of Victory Nursing Home in Bourbonnais, Illinois.

Madeline was a homemaker and past co-owner of Phillips Press.  She was a member of Central Christian Church in Bourbonnais, where she was an Elder Emeritus. She sang in the church choir, served as a Sunday school teacher, youth sponsor and was a longtime member of the church’s bowling team. She was the past president of Christian Women’s Fellowship and the past president of the statewide Christian Women’s Fellowship. Madeline was a member of P.E.O., the Rebecca Lodge and the Zonta Club.

Madeline was a scout leader, a member of the Riverside Auxiliary and a volunteer at Riverside Medical Center.  She was a volunteer and delivered Meals on Wheels.  She also was a longtime member of the Jolly Sam’s RV Camping Club. After retirement, Madeline and her husband worked at the Trailer Life Publishing Company for 20 years. Also, after retirement, Madeline and her husband were winter Texans. She mentored elementary students while in Texas.

Surviving are one son and daughter-in-law, William and Mary Phillips, of Fleming Island, Fla.; two daughters and one son-in-law, Sandra Wadley, of Bradley, Jan and Dave Savage, of Bloomington; her “adopted daughter,” Ellie Guenette, of Bradley; one sister, Maxine Brewer, of Bible Grove, Missouri; five grandchildren, Douglas and Kelli Wadley, of Bourbonnais, Amy and Gary Reiss, of Curlew, Wash., Laurel and Tom Kelecius, of Lakewood, David and Julie Phillips, of Wake Forrest, N.C., and Tara and Brian Fleming, of Bloomington; 17 great-grandchildren, Zachary and Natalie Wadley, of Normal, Nathan Wadley, of Bourbonnais, Spencer, Anna, Emma, Joshua and Elizabeth Reiss, all of Curlew, Wash., Catherine, Madeliene, Reilly, Reid, Bennett, Griffin, Tessa and Genevieve Kelecius, all of Lakewood, Annabelle Phillips, of Wake Forrest, N.C., Faith Fleming. of Bloomington; one great-granddaughter on the way, Tenley Fleming; and many nieces and nephews.

She was preceded in death by her parents; her husband; six brothers; and five sisters.