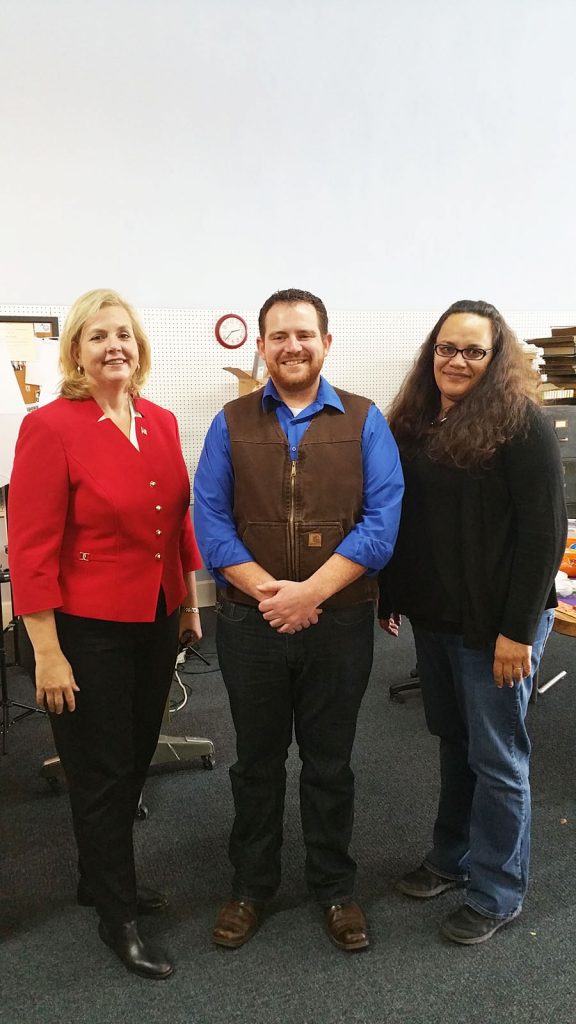 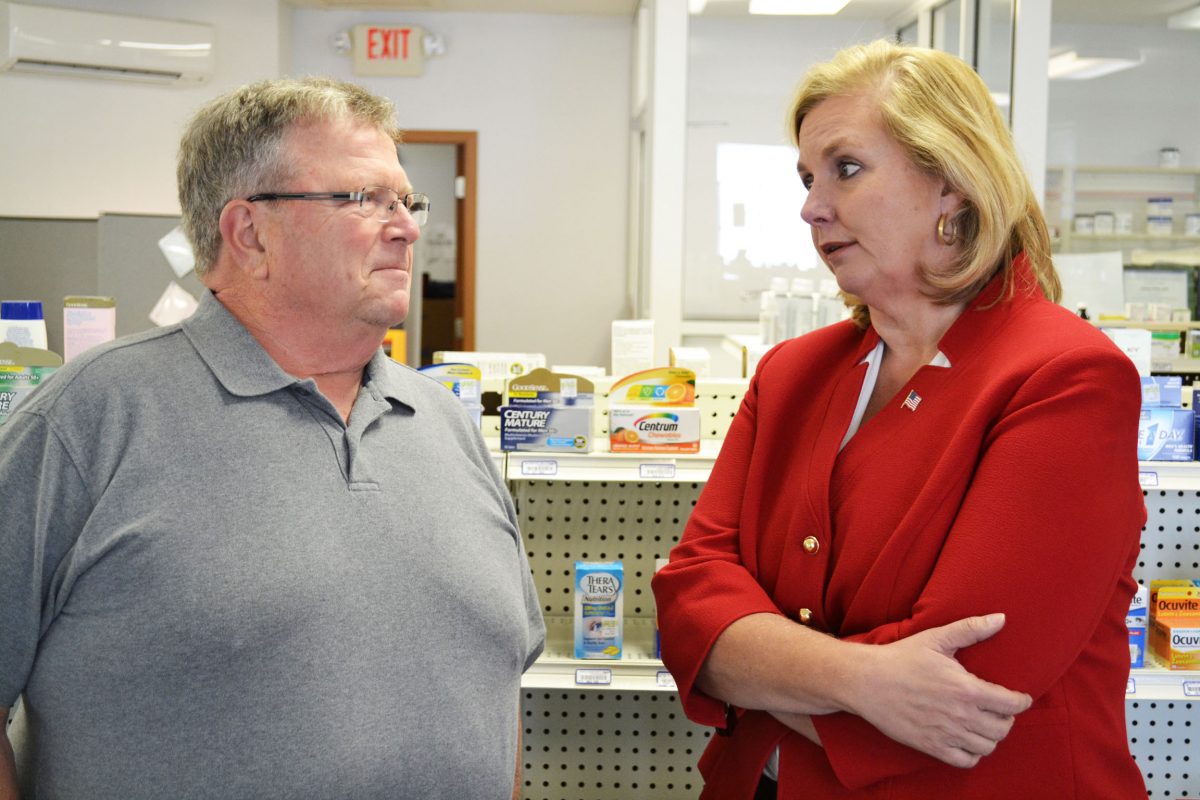 Missouri Gubernatorial Candidate Catherine Hanaway visited Kahoka as part of a tour through northeast Missouri last week. On Thursday, she stopped at the Clark County Pharmacy to visit with Neill McKee and other Clark County residents. 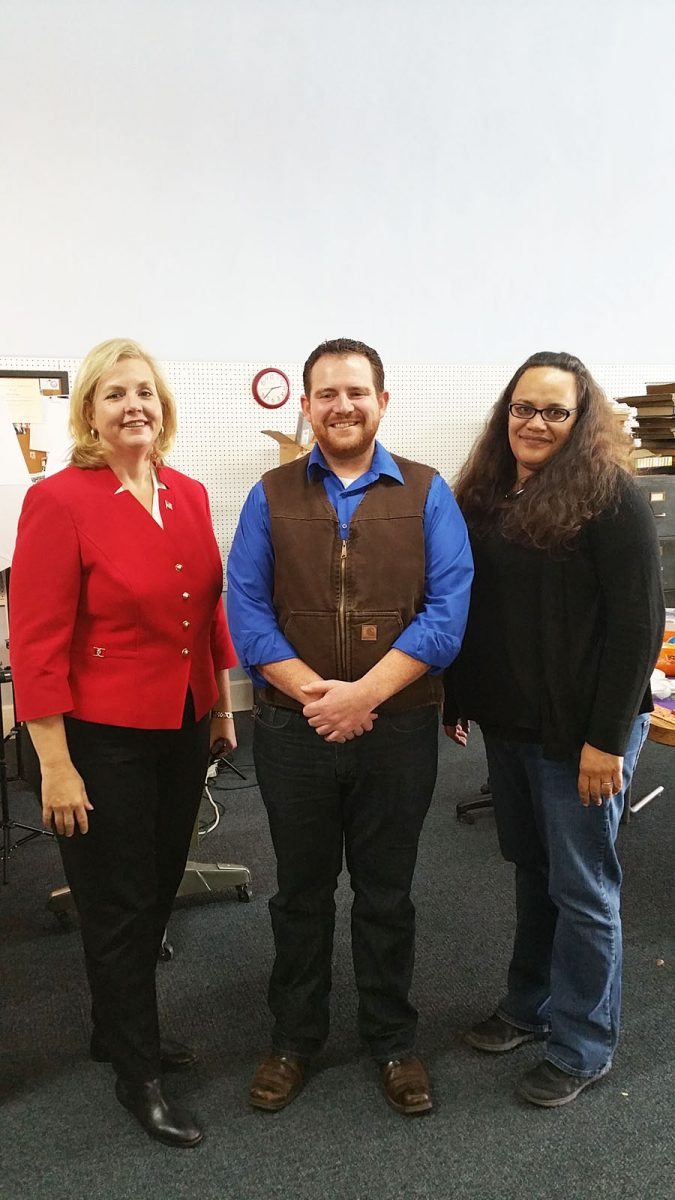 By Mike Scott and
Echo Menges

With the election just a year away, the race to become Missouri’s next governor is already well underway. On Thursday, October 29, Catherine Hanaway (R), 51, made a swing through Northeast Missouri, making stops in Schuyler, Clark and Knox Counties before heading to Hannibal. In Kahoka, she met with local residents at the Clark County Pharmacy.

Hanaway was the first woman to hold the office of Missouri’s Speaker of the House, serving from 2002 to 2005. In that role, she pushed for Missouri’s first concealed carry law, fought taxpayer funding for abortion and helped pass Missouri’s first abortion waiting period law.

She was later appointed to serve as U.S. Attorney for the Eastern District of Missouri, where she prosecuted over 4000 criminals.

“I think this will be a law and order election, particularly in the urban areas,” Hanaway said. “After what happened in Ferguson, you almost have to chose a side. Are you going stand up with the police, or are you going to stand up with people who come into our state to burn buildings and riot. Ferguson is one of the most integrated communities we have in the whole state-they’re wonderful people. Those out of state people kicked kids out of school for two weeks, they destroyed businesses, and we really have to have a governor that is willing to go into that situation, take control, and not pre-judge the facts,” she said.

“One of the first thing Governor  Nixon said was ‘Officer Wilson should be indicted as soon as possible, which is what caused a lot of the unrest. Even Attorney General Holder said there was no excessive use of force,” she added.
As U.S. Attorney, Hanaway knew many of the law enforcement personell involved, and praised their effort. “Think about what we asked of them in the wake of it, the shifts they had to work, how long their lives were at risk trying to protect people.”

We asked Hanaway what sets her apart from the other Republicans in the race.

“I have been a prosecutor, which is very important, especially matching up against the current Attorney General (Chris Koster) who only talked about that credential in his race. Also, I haven’t spent my whole career in politics, but I have experience. Of my 51 years, I’ve only spent 11 of them in elected or appointed office. I’m not a career politician. Another thing that distiguishes me, by accident of birth, is that I am a woman. Going into a fight against a democrat, and trying to win suburban voters and soccer moms, I think it’s going to be an advantage.”

“I do have concerns about statewide taxpayer support for a stadium in downtown St. Louis,” Hanaway said. “I think it’s wrong to ask taxpayers who won’t ever use that dome to pay for a place where millionaire players and billionaire owners make the profits.

During her visit to northeast Missouri, she also discussed her desire to make Missouri number one in agribusiness and improve the state’s roadways. Hanaway wasn’t shy about explaining her desire to eliminate county health ordinances and make one set of rules followed by concentrated animal feeding operations (CAFOs) throughout the state.
“They bring jobs and opportunity to Missouri. Free market should decide, not government,” said Hanaway. “The state, in order to market itself, needs to have one set of consistent rules statewide.”

Hanaway grew up in the Midwest (she was born in Nebraska) and later moved to Missouri to begin her professional career in St. Louis where she lives with her husband Christopher, daughter Lucy, and son Jack.

“The reason I’m running for Governor is because I’m concerned Missouri is losing too many jobs,” said Hanaway.
Hanaway faces a crowded field of Republican running against Chris Koster, the lone Democrat in the race. The other Republicans are John Brunner, Bob Dixon, Eric Grietens and Peter Kinder. Also running is Independent Les Turilli, Jr.