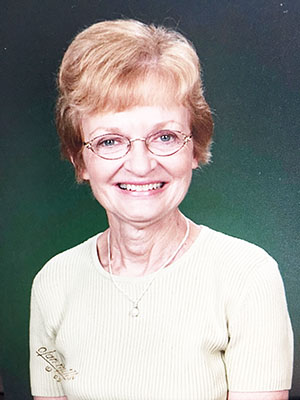 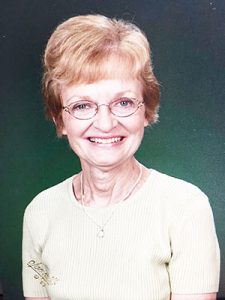 She was born on August 25, 1941 near Donnellson, Iowa to Willis and Alice Mehl Hohl. Carolyn graduated from Argyle High School in 1959 and from Northwest Missouri State University in 1963 with a degree in Education.

On July 11, 1965, she married Arthur Carlson at the Argyle Presbyterian Church. They have two children, Tim Carlson and Amy (Carlson) Lowe.

Carolyn was a teacher for over forty years, retiring from Running Fox Elementary in 2001. Carolyn’s greatest joy was her family. She loved babysitting when her grandchildren were younger and more recently watching them in sports and activities. She was a devout Christian and an active member of the Emmanuel United Methodist Church, United Methodist Women and Fidelity Circle. She spent many hours volunteering with her church family. Carolyn was also a member of P.E.O., Chapter U and held office for many years. Carolyn had a great love for animals, especially her two pet cats. Her favorite hobbies were cooking, walking outdoors, reading, playing piano, watching the Cardinals play baseball, and playing cards with friends. Carolyn and Art enjoyed many sightseeing trips across the United States in their retirement.

She is survived by her beloved husband of 50 years, Art; son Tim Carlson and his wife Christie of Thornton, Colorado; daughter Amy Lowe and her husband Scott of Mt. Pleasant, Iowa; and four grandchildren Chase and Maddie Carlson & Ally and Jake Lowe. She was preceded in death by her parents, her sister, Marilyn Hohl Leazer, and an infant brother, Marvin Hohl.

Funeral services will be held at 11:00 a.m., Monday, at Vigen Memorial Home, 1328 Concert Street, Keokuk, with Pastor Dave Barrett officiating. Burial will follow at Oakland Cemetery in Keokuk and a luncheon at Emmanuel United Methodist Church in Keokuk. Visitation will be held after 1 p.m. Sunday at the funeral home with the family meeting with friends from 6 – 8 p.m.

A memorial has been established for Emmanuel United Methodist Church in Keokuk, Lee County Hospice and P.E.O. Cottey College.