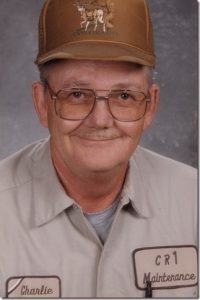 Charlie was born September 15, 1945 at Memphis, MO, a son of William and Nora
Mendenhall Miller.

He was united in marriage to Sheila Horton on April 19, 1966 at the First Baptist Church in Keokuk by Rev. Sweeney.

He was preceded in death by his parents; his father-in-law; four brothers: Rick, Gene, Bob, and Jim Miller; and, two sisters, Edith Jones and Frances Harris.

Charlie attended school in Memphis, MO and was raised in the Christian Church there. He entered the Army early before graduating and received his G.E.D. while serving in the military.

He had worked in maintenance a number of years for the Clark Co. Nursing Home and at his retirement he had been a 25 year employee of the Clark Co. R-1 School District. He took great pride in painting the football field for homecoming and other special games. He was nicknamed the “Candy Man” because he always had a piece of gum or candy for the kids. He had owned a bait and archery shop in Medill and was President of the NEMO Bow Club.

Charlie loved to hunt and fish. He and Sheila enjoyed nightly rides just to enjoy nature and to see what wildlife they might view. He was a huge John Wayne fan and loved watching western and war movies. The biggest piece of his heart belonged to his family and especially grand and great-grandchildren. He loved them dearly and loved to see their faces when he would pick on them, tease them, and just give them a hard time.

Funeral services were held Tuesday, December 15, 2015 at 2 p.m. at Wilson Funeral Home in Kahoka with words of comfort being provided by George LeMaster, Jr. Special music was “I Cross My Heart”, “One More Day”, and “Go Rest High”.