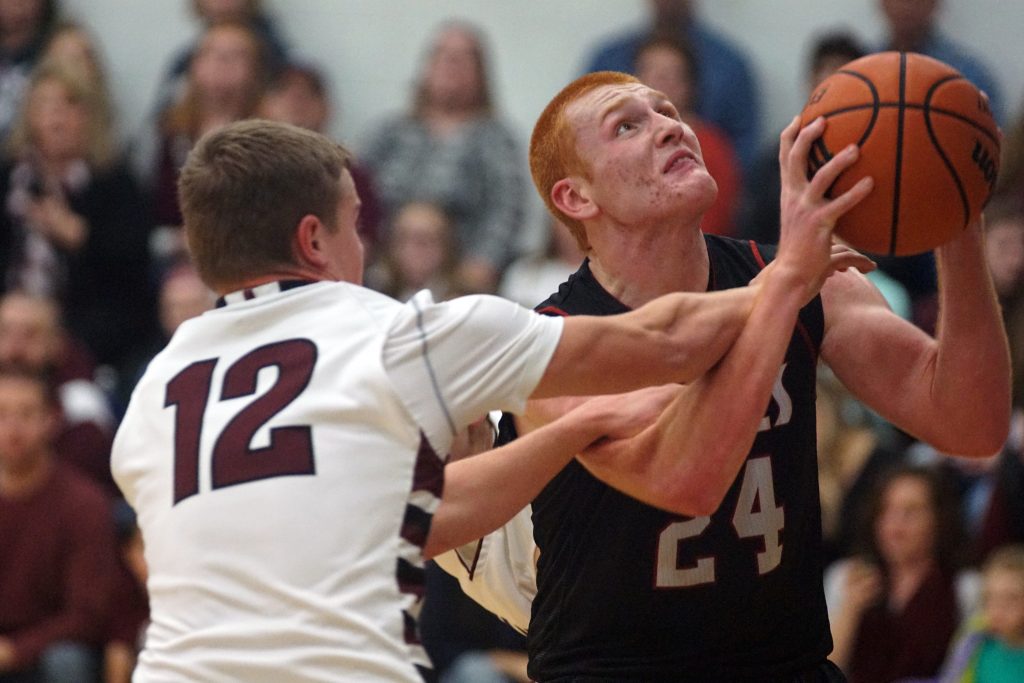 Unity of Mendon took a page out of Knox County’s playbook, pressuring the Eagles (5-4) into turnovers during the first five minutes of their MVIT championship semi final contest. The Mustangs (9-3) scored the first 12 points and went on to a 67-56 win.

Unity played Payson-Seymour for first place while the Eagles fell to the third place game with the Quincy-Notre Dame JV.

“When you play Unity on their home court or anywhere, they are going to play hard,” Knox County coach Zach Summers said. “They play good, hard basketball. We matched that all night long.”

“If it wasn’t been for four minutes of being lackadaisical or not being aggressive, that’s our ball game to win,” Coach Summers said. “Credit our kids. We are growing up.”

“Our intensity wasn’t where it needed to be,” Mustang coach Keith Carothers said of his team’s first round game, a 64-53 win over Griggsville-Perry.

“We talked in the shoot around today about just getting after it right from the get go.”

“We pressured a little bit. We felt like we could speed their guards up, make them do things they didn’t want to do,” Keith Carothers said.

“Credit to our boys. They had a lot of energy coming out. They were really looking for a chance to play for a championship.”

Unity beat the Eagles at their own game early on. The Mustangs forged a 12-0 lead with 2:45 to play in the first quarter.

Knox County missed at least two scoring chances in the first five minutes after beating the Mustang press. The Eagles responded in kind. Unity was able to break the Eagle press, driving down the lane for lay ups.

Knox County began taking the ball at the Mustang defense late in the first quarter. Nick Edwards and Shane Clary combined for a 4-4 stint at the free throw line for a 6-2 KCHS run.

Unity was a solid 15-19 on the night from the free throw line. The Mustangs did a good job of getting to the rim and finishing. Unity outscored Knox County 20-7 in terms of made field goals.

Unity led 29-19 at the half. The Mustangs made plays and shots at opportune times, keeping momentum in a white home jersey most of the contest.

Mustang center Brennan Bergeman stepped out and sank a game changing three ball 30 seconds into the second half.

“We started that quarter with a couple of threes,” Keith Carothers said.

“It wasn’t like we planned to go out there and launch those. I thought we did a good job early in the third quarter getting the ball inside and being more active on the offensive end.”

“Guys penetrated and set up open looks from the outside,” Carothers said. Unity scored 23 third quarter points. The Eagles answered with four made three pointers in the third period.

Knox County cut the Mustang lead to 63-52 with 38 seconds to play. The Mustangs got a key offensive rebound and points.

Hayden Miller tossed in a three ball with 13.2 seconds to play in the game, closing the book on a 67-56 Unity win.

“We missed a lot of free throws and lay ups in the first half of Monday’s game,” Keith Carothers said.

“When we get opportunities, we need to make them count. I thought we did a better job of putting the ball in the basket tonight.”

“We left a few out there, but we finished under the basket a lot better tonight without a doubt,” Coach Carothers said. “Our effort, energy and intensity was a lot better than it was Monday night.”

“As long as we can keep our energy up, we can be pretty tough,” Keith Carothers said. Adam Donley scored a game high 16 Unity points. Brennan Bergman put in 15 Mustang points. Cory Miller was in double figures with 12 points.

“We wanted to cut a ten point game to five in the third quarter,” Knox County coach Zach Summers said. “We knew they were getting a little tired. That would have been to our advantage.”

“If we could have got a turnover right away. Good on (Brennan) Bergeman. I don’t think he shoots many of those,” Zach Summers said of the early three pointer by the Mustang post player.

“He stepped out with confidence and knocked a three down. I was hoping to get possession back. We give up a three and 13 points. They go up 12 to nothing and in the third, had their big run,” Zach Summers said.

“When you get outscored by 23 (points) in about a four minute span, you can’t have that,” Summers said. “It was just a lack of being aggressive in those spots. We got lackadaisical, they were able to force turnovers.”

“We turned the ball over a lot and so did they,” Zach Summers said. “I thought the biggest difference was our turnovers gave them lay ups. Their turnovers were aggressive turnovers.”

“We didn’t get to run out and shoot lay ups. We cut it to seven in the fourth, and a kid goes out and hits a three,” Zach Summers said. “Every time we hit a big shot, they hit a big shot too.”

“They didn’t let us cut it any closer than that. That’s good on them. They are a very good basketball team,” Zach Summers said of the Mustangs. “We are getting close.”

“We are not there yet. I thought how we competed in our half court defense was a positive. Everything was a positive, except for about four minutes of the basketball game.”

“I’m excited, moving forward with that.”