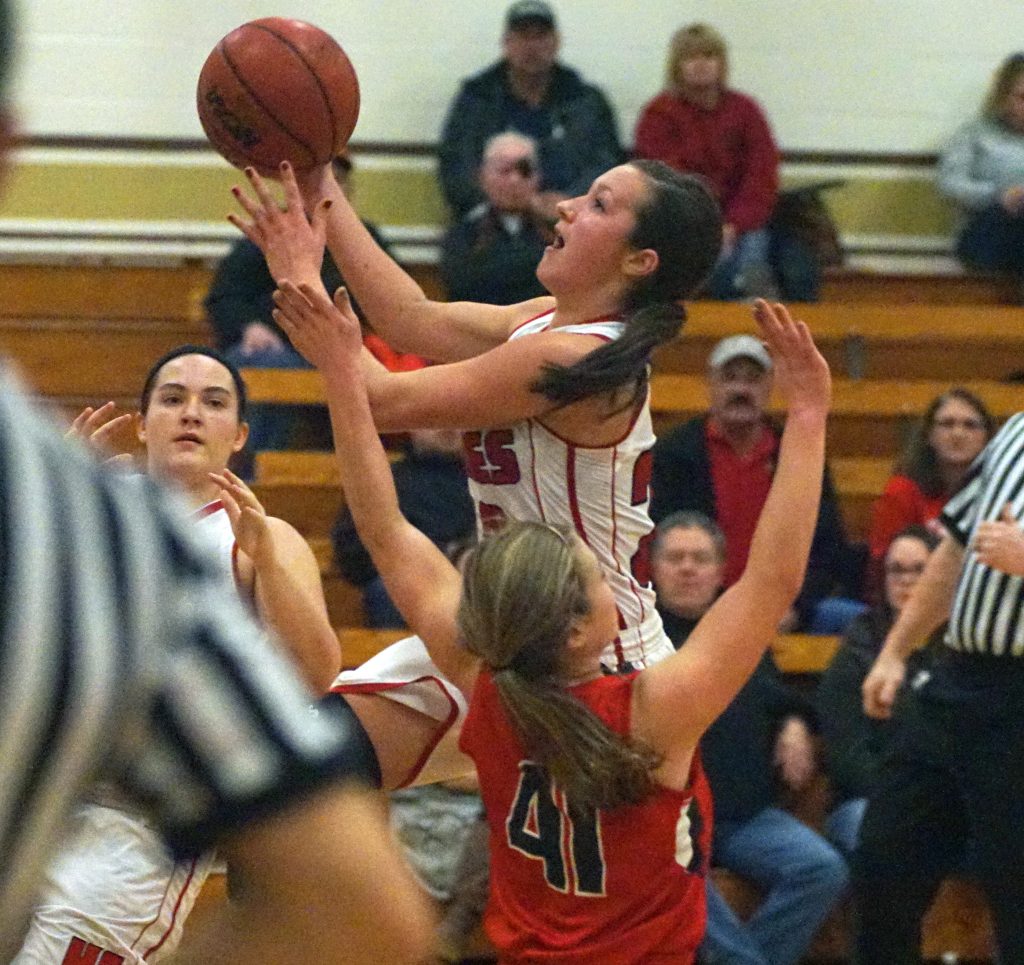 The Lady Eagles saw a seven point lead evaporate with 3:12 in the fourth quarter.

Mexico (1-8) took Knox County senior Madison McCabe away defensively, leading by a point as time ran down. McCabe found Jessie Anderson on the wing. Anderson stepped up and buried the three ball for a 44-42 Lady Eagle win.

“The play was intentionally set up for Madi (McCabe),” Jessica Anderson said of the decisive set. “She was going to pass it to Sidney (Miller). Sidney was going to hand it back to her and she was going to go up and hopefully make the shot or get fouled.”

“The (Mexico) girl caught on to what we were doing,” Jessica Anderson said. “She just flipped it out and I shot it. It was exciting. Very exciting to beat that team.”

Knox County was able to make a physical Mexico team turn the ball over early in the game. The Lady Eagles grabbed a 7-2 lead. Class 4 Mexico had a decided height and strength advantage.

Adria Costly stepped up on both ends of the court or Knox County would have likely ran away with the win in the fourth quarter.

Freshman Raigan Playter scored from all over the court. Playter finished with 16 Mexico points. Knox County was able to keep two tall Mexico centers from hurting them offensively.

The Lady Bulldogs blocked Knox County scoring chances and roared back into the game in the first half. Adria Costly and Raigan Playter led a 9-1 Mexico run to a 22-19 halftime lead.

Knox County came out of the dressing room with a plan to take play right at the Lady Bulldog strength in the lane. Megan Poston muscled two field goals through the cylinder, lighting the fuse for a 7-0 Knox County run to a 26-22 lead.

Jessie Anderson’s three pointer rattled around the rim and in at the 5:05 mark of the third quarter for the four point KCHS edge. Knox County’s defense bothered the Mexico ball handlers.

Knox County’s girls took a page out of their boy’s book. The Lady Eagles pressured Mexico players in an attempt to wear the larger Bulldogs down physically.

The teams battled down the stretch. Knox County appeared to take the advantage when Sidney Miller grabbed an offensive rebound and completed a three point play for a 37-30 lead with 3:12 remaining in the game.

Mexico had other ideas. Adria Costly sank a two then a three pointer, pulling the Bulldogs within a field goal with 2:10 showing on the fourth quarter clock.

Madison McCabe answered with a driving hoop for a 39-35 edge at the 1:38 mark of the fourth quarter.

“I was pleased with our effort at certain points of the ball game,” Mexico HS coach Ed Costley said. “It’s coming off tough, back to back losses. We lost to Warrenton on a buzzer beater Saturday.”

“I thought we started off rough and sluggish in the first quarter,” Ed Costly said. “Knox did a good job defending, and changing up defenses. They put pressure on us.”

“It wasn’t so much the turnovers, we just weren’t playing clean,” Coach Costly said. “We needed to be more effective and precise with our passes. Raigan Playter got us going early. Adria Costley stepped up later in the game.”

“We lean on her a lot,” Ed Costly said. “They did a good job of holding her down late in the game. We missed some wide open looks from the three (point line),”

Raigan Playter buried a Bulldog three ball. Kayla Scobee put Mexico in the lead at 40-39. Madison McCabe drove the lane and scored with 30 ticks on the clock for a 41-40 Knox County lead.

Raigan Playter stepped up and sank a Mexico bucket with 15 seconds remaining in regulation time for a 42-41 Mexico lead. Knox County adjusted well off a well defended play.

Knox County fans roared when Jessie Anderson’s home run ball went through the hoop for a 44-42 lead with three seconds in the game. Mexico called time out with 1.9 seconds remaining.

A long Bulldog inbound try went out of bounds untouched. Knox County was able to inbound and run off the final two seconds for a thrilling two point win. “We need to do a better job rebounding,” Ed Costly said.

“Knox County did a good job on the glass getting second chance opportunities,” Costly said. “One play in the game did not make the difference. We missed some point blank lay ups that could have made a difference.”

Knox County missed nine free throws (8-17) that could have cost the Lady Eagles a signature win. Mexico sank six of eight from the charity stripe.

“There were times where we just gave up too many second chance opportunities,” Ed Costly said. “It was an exciting ball game. We are a young team that is just trying to find some offense.”

“It is just one of those things that you just have to go through growing. It would be nice to be on the winning side of one or two of these things,” Ed Costly said.

“We have been consistent with our conditioning and pace that we can do what we want to teams,” Knox County coach Keith Gudehus said.

“I felt like our conditioning was the difference in the third quarter,” Keith Gudehus said. “We kind of pulled away. I give them credit. In the fourth quarter they fought back.”

“They hit some big shots. We had a good look at the end to win it,” Gudehus said. “Sometimes that’s the way it goes. We drew the play up to look just like it looked.”

Madison (McCabe) was going to throw to the post, come over the top and take a handoff then come back and shoot a lay up,” Keith Gudehus said.

“They switched it perfectly. Then she had Jessica (Anderson) open on the kick out.”

“Jessie knocked it down,” Coach Gudehus said. “It’s just a matter of execution. Hitting the big shot when you need it. That was the difference in the game.”

“I don’t think we played really well tonight. We missed too many shots and free throws.”

“The effort is always there. The intensity is always there. As long as you have those two things, you have a chance to win. Sometimes just working harder than the other team will get you some breaks,” Keith Gudehus said.

“Getting some lay ups, getting some shots that you might not get otherwise,” Coach Gudehus said. “The girls have put themselves in a position to win all year. They have been in every game. Fortunately, we have won most of the tight ones.”

A game Canton Lady Tiger team came back from an early deficit to send their semi final with Macon to overtime tied at 43.

Macon held off the Canton challenge for a 51-43 overtime victory.