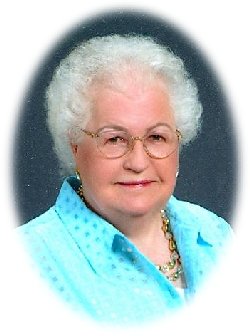 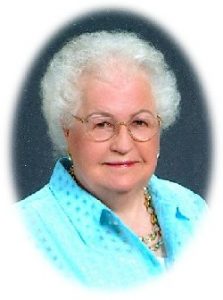 Lucia Maria Tarvydas, 94, of Edina, Missouri, passed away on Monday, January 4, 2016, at Briarwood Health Care Center in Iowa City, Iowa. Lucia is missed by her loving family and many dear friends.

Lucia was born on April 18, 1921, in Cicero, Illinois. She was a daughter of Martynas and Barbora Satkus Balciunas. Her parents had come to the United States from Lithuania, met and married.  After a few years they returned and purchased their farm near Birzai, Lithuania. Lucia grew up in Lithuania and attended Vilnius University where she studied accounting until intense fighting during WWII reached Vilnius.  She returned to her family’s farm, then moved to the small city of Birzai where she met and was eventually employed by her future husband Dr. Francis Tarvydas as a bookkeeper during the waning years of the war.

On June 12, 1943, she was united in marriage to Dr. Francis Tarvydas in Birzai. Lithuania was occupied by the Germans at the time, and national costumes were forbidden. But their bridesmaids wore them to show patriotism. Francis preceded Lucia in death on January 28, 1985.

In the 1940s, Francis was very active in the Lithuanian resistance movement against the Soviets. But eventually during World War II, he and Lucia fled west to reach a zone occupied by American troops, and their lives were continually in danger on the journey. They narrowly avoided the firebombing of Dresden, Germany. Lucia arrived in the United States in New York on May 22, 1947 on the S.S. Ernie Pyle, and Francis rejoined her a year later.

They lived in Cicero, Illinois, St. Louis, Missouri, East St. Louis, Illinois, and California, Missouri, before settling in Edina in 1953. For decades, Lucia served as the bookkeeper for her husband’s medical practice. She was active in the Edina community and for many years was a member of the Elizabeth Barrett Browning Club. She enjoyed the annual Knox County Corn Festival for many years. Lucia enjoyed crocheting, sewing, cross stitch, and watercolor painting. She spent a lot of time relaxing with family members at Baring Country Club of which she and Dr. Tarvydas were members since the 1950s. She was a devout parishioner of St. Joseph Catholic Church in Edina.

Lucia spoke English and Lithuanian fluently, and she and Francis instilled knowledge of and appreciation for Lithuanian culture in their children and grandchildren. The family attended many festivals and other social gatherings in the Lithuanian-American communities in the St. Louis and Chicago areas. Starting in 1987, Lucia and her immediate family members made several trips to Lithuania and Latvia and enjoyed the hospitality of their many relatives there.

She kept up not only on local and national news but also on international events, especially regarding Lithuania. Also over the years, her favorite television shows included “General Hospital,” “Judge Judy”, “Castle,” and “I Love Lucy.” She loved socializing and sharing much laughter.  In her later years, the Knox County Nutrition Site allowed her to visit with friends while staying involved with current events in Edina.

In the United States, Lucia’s survivors include her daughter Dr. Vilia Tarvydas Sauerberg and son-in-law George Sauerberg, of Iowa City, Iowa and daughter Sylvia Miller and son-in-law Robert Miller, of Quincy, Illinois; and five grandchildren: Ted (Julie) Sauerberg of Aurora, Colorado; Ryan Tarvydas of Hannibal, Missouri; Alexandria Miller of Carthage, Illinois; and Marcela and Brigita Miller, both of Quincy, Illinois. Survivors also include four great grandchildren: Skie Tarvydas of Hannibal, Missouri and Breckyn, Allie, and Tait Sauerberg, all of Aurora, Colorado. Lucia is also survived by cousins Diane Vargofcak of Alexandria, Virginia and Patsy Wallace-Jones of Indian Wells, California as well as many family members in Lithuania and Latvia.

In addition to Francis, Lucia is preceded in death by her parents; her sister, Mary; her brother, Victor; her son, Richard Francis (Rick), and her grandson, Richard II (Ricky).

Interment will be in the St. Joseph Catholic Cemetery in Edina, Missouri.

Monsignor David Cox, assisted by Deacon Ken Berry, will officiate and music will be provided by Nancy Reardon, Brigita Miller, along with Jim and Kyle Clark.

An expression of sympathy for Lucia Tarvydas may be left to the Knox County Nutrition Site, St. Joseph Catholic Church or the Baring Country Club. Memorials may be left at or mailed to the Doss Funeral Home 208 N. 4th Street, Edina, Missouri 63537.