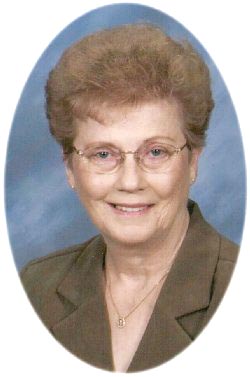 She was born on October 11, 1934 near Plevna, Missouri, the daughter of Ray Edward and Grace Ballinger Prosser.

She graduated from the Edina High School in the Class of 1942.

Vesta married Robert Lee Dent on April 16, 1952 in Edina, Missouri, before graduation since Robert was leaving for the military. She would join him in California after graduation.

They would return, after Robert served during the Korean Conflict, to farm near Newark, Missouri. In 1984 they had a farm sale and moved to Edina, Missouri and started the Dent Auction House, where she worked the kitchen and clerked before Robert’s health failed.

She enjoyed painting china, quilting, knitting and meeting with the 80’s Ladies but most of all she cherished the time spent with family.

Vesta was preceded in death by her parents, husband, Robert Lee Dent in 1996; a grandson, Travis Burkhardt in 2003 and a brother, Ray Prosser, Jr.

Visitation will be after 12:00 noon on Saturday, January 23, 2016, with the family receiving friends from 1:00 p.m. until service time at the funeral home.

Burial will be in the Bee Ridge Cemetery, southeast of Edina, Missouri.

An expression of sympathy in memory of Vesta Dent may be left to the Bee Ridge Cemetery Association. A memorial may be left at or mailed to the Doss Funeral Home 208 N. 4th Street, Edina, Missouri 63537.