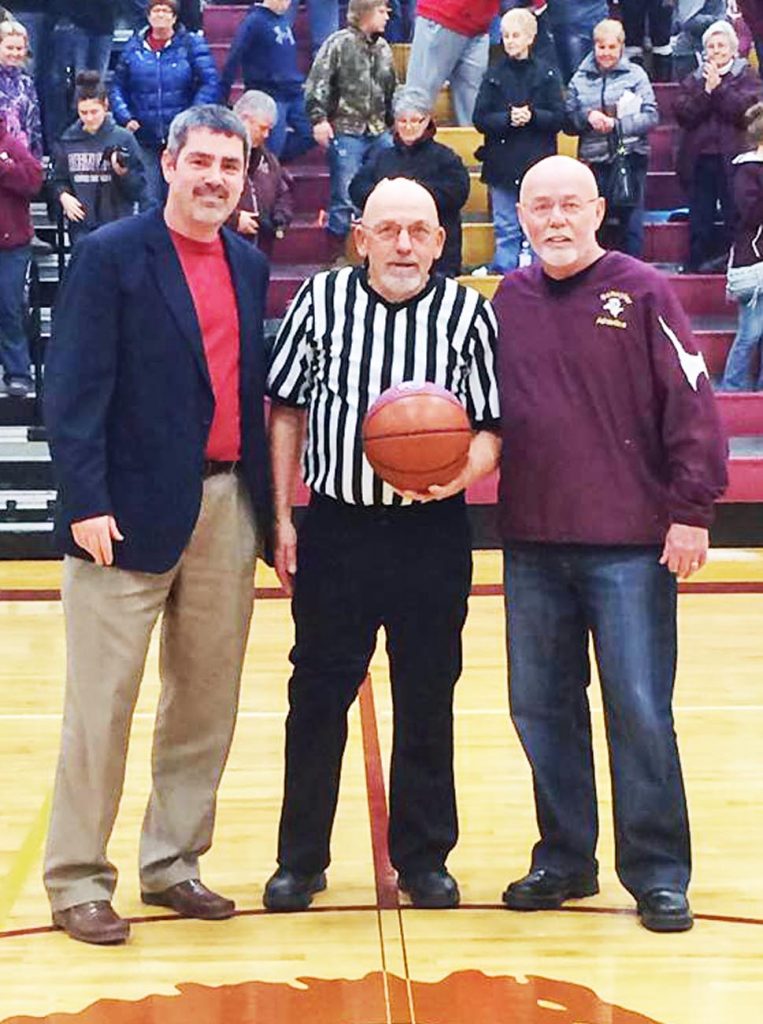 After 45 years of officiating, Rodney Gares is hanging up his stripes.

“It’s a thankless job,” Gares said. “And it has to be in your blood if you want to do it.”

Rodney started his refereeing career with the guidance of his uncle, Delbert Murphy.
“Whenever we would get together at family meals, we would talk about it,” he said.

“In my senior year, I thought I was kind of interested, so I went to talk to my coach, Dean Hunziker, who was also the AD (athletic director) at that time. I told him I was interested. He was having a hard time finding officials, and he said he would give me some junior high games for the following season. He did all the paperwork for me, and bought my first year’s license,” Gares said.

“I only called at Clark County that year, then the rest started to fall into place. I started going to other schools-Revere, Gorin and Wyaconda, places like that, and one thing led to another and I just stayed in it,” he continued.

Those small schools gave Gares his real start in refereeing. It took several years to build up his schedule to include bigger schools, but before long, he was calling games five or six nights a week.

“The most fun I had was at those small schools. Wyaconda and Gorin had Junior High tournaments and they would just pack those little gyms, and it was fantastic. Back in the day, that was the entertainment in those small towns. Everybody would come to them. Almost all those little schools are gone now.”

When he started as a referee, Rodney’s worked for Bill Ragan at Ragan Gas. Ragan let him come in early and work through lunch so he could get to games in time to referee. When Ragan sold to Heetco, he kept the same arrangement.
Self employed for the past several years, Rodney was more flexible in working his schedule.

He also called games with other, in his words, “great” officials like Joe Kiley, Ray Eiler, and Gene Hall.

“It’s hard working with a new partner. Everybody calls the game a little differently,” he said.

I asked Rodney what is best memories were.
“I got to work with some great coaches,” he said. “John Austin at Wyaconda, Paul O’Day at Revere, Stanley Welker over at Gorin, and Tom Shalley from Scotland County and Kenny Roberts from Knox County. These were great guys that were very well respected. If they talked to you in a time-out and said we should be looking for something, then something was going on. The new breed of coaches are as different as night and day.”

Over the years, Gares was also a licensed referee in both Iowa and Illinois.

The travel grinds on officials, and living in northeast Missouri, Rodney did plenty of driving. Besides all the local schools, he has refereed in places like Ottumwa, Mercer, Boonville and Mexico.

A person doesn’t work as a referee for 45 years for the money. It’s for the love of game and for the kids.

When he started, Gares was paid five dollars to ref two JV games, or $7.50 for two varsity games. Of course, the pay has gone up, but when you consider the sometimes one to two hour drive times, each way, plus about three hours of game time, the money isn’t great.

“Back then, the money did help us pay our bills,” he joked.

Gares also recalls many of the faces he saw as players, and especially those he’s seen develop into coaches.

“I’ve seen a lot of kids grow up in Clark County and around the whole area,” he said with a smile on his face.

He enjoys when former players talk to him at ball games or other places.

But some of his happiest times are when he has been able to call games with his children.
His son, Kyle, a graduate of Western Illinois University, held an Illinois license, and they had the chance to work several games. Julie, his daughter, never got her license, but has worked with her dad calling a lot of intramural and lower level games.

Rodney is particularly grateful to his wife of 33 years, Mary, for all she has done to let him referee for all those years.

“I’m really glad she was at Schuyler County with me the other night,” he added. 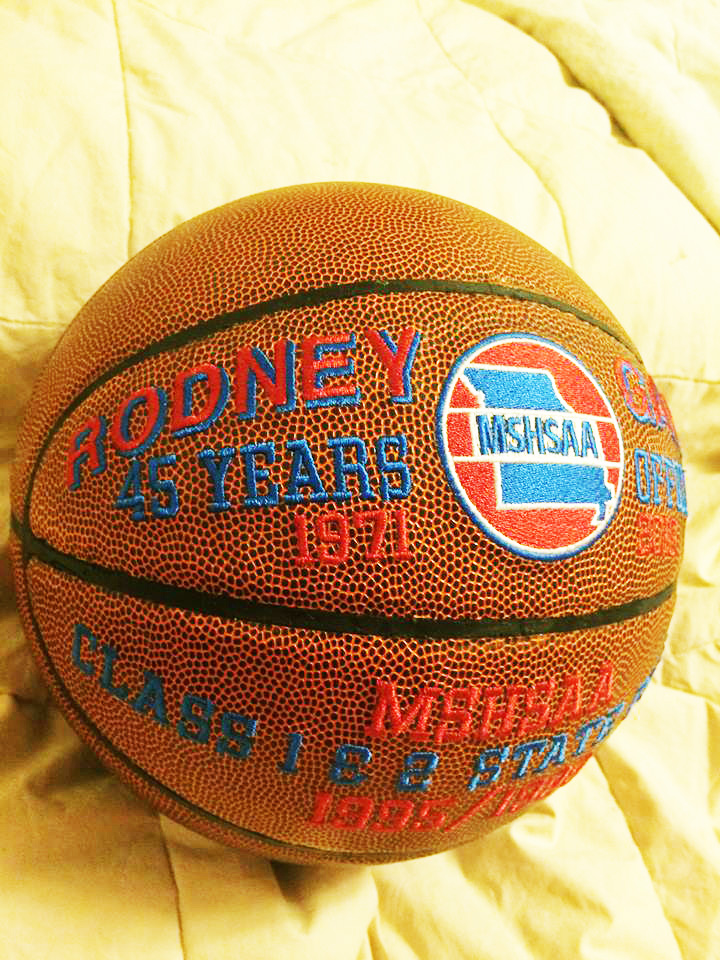 This commemorative ball honors Gares’ 45 years as a basketball official. 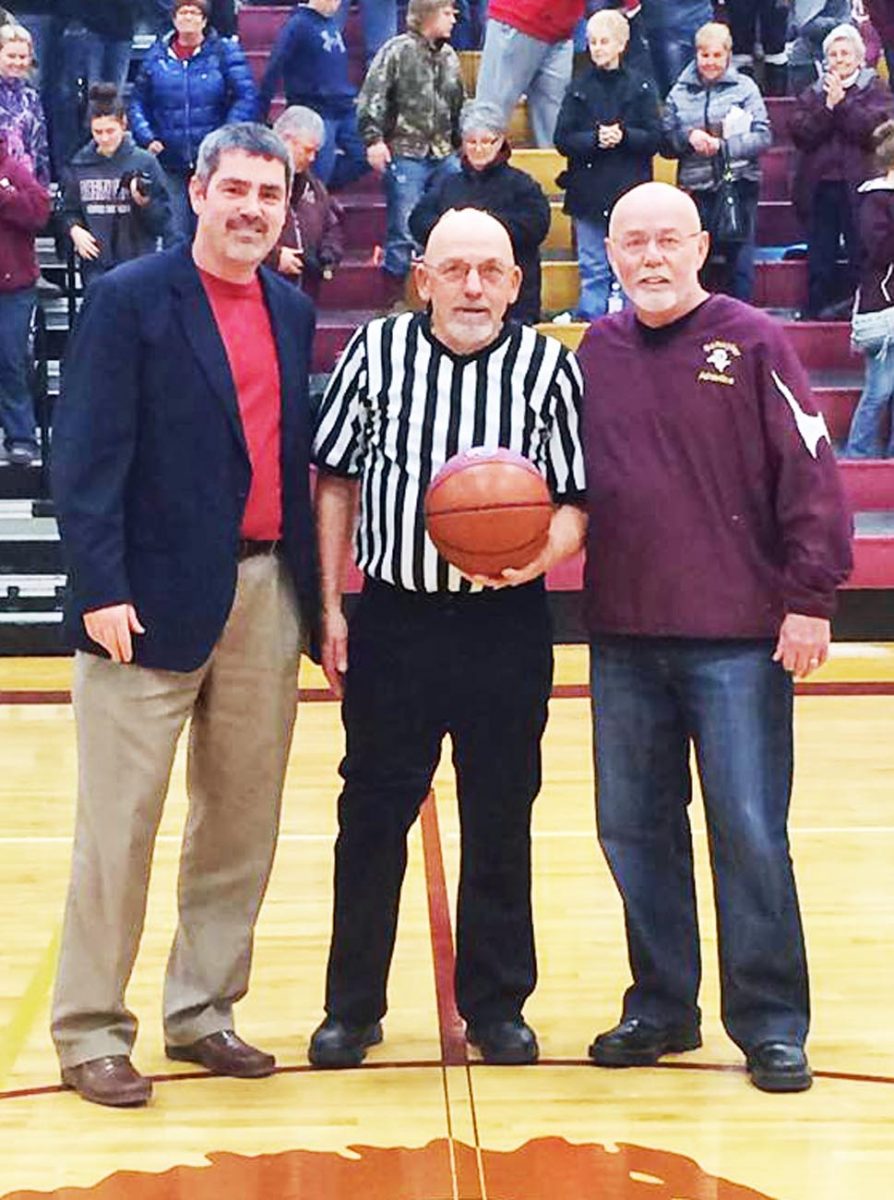