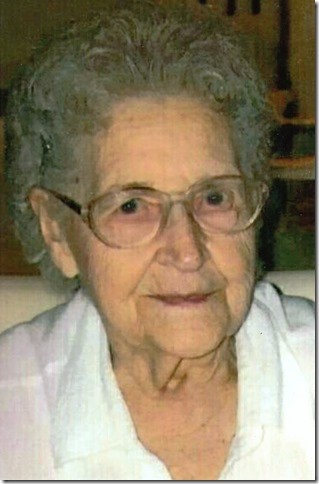 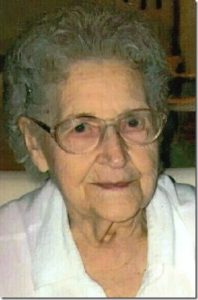 Madeline Riney, age 95, of Kahoka, MO, passed away on Monday, February 22, 2016 at the Scotland Co. Memorial Hospital in Memphis, MO.

On November 23, 1944, she was united in marriage to Richard Joseph Riney at St. Michael’s Catholic Church in Kahoka, MO. They were the parents of Darlene and Joyce, both of which she dearly loved.

She was preceded in death by her parents; her husband, Joe Riney; a brother, Lowell Edward Smith, who lost his life in the Korean War; and son-in-law, Jim Farran.

Madeline graduated from Wyaconda High School in 1939 and was a member of the Wyaconda United Methodist Church.

She was a farmer’s wife and together she and Joe worked side by side helping each other in any way they could. For thirteen years she worked in the kitchen at the Clark Co. Nursing Home. She always put in a large garden and grew many flowers bordering it as well as other places in her yard. She loved her flowers and loved doing “fancy” work. She treasured time spent with her grandchildren and their families.

Funeral services were held Thursday, February 25, 2016 at 10 a.m. at Wilson Funeral Home in Kahoka with Larry and Ilene Howell officiating. Pianist was Darrin Howell and vocalist was David Ickes. Special music was “How Great Thou Art” and “In the Garden”. In addition, recording of “One Day at a Time”.

Memorials were suggested to the Wyaconda Cemetery.