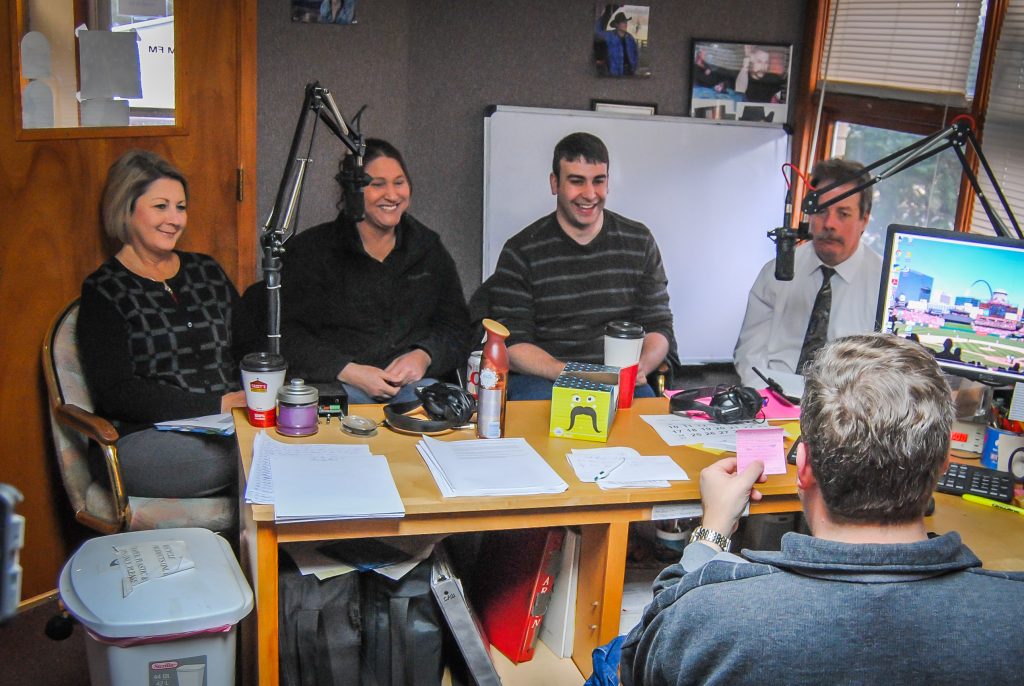 Scroll down to watch a video of members of the Adair and Lewis County Drug Court Team appearing on the KMEM-FM Coffee Break radio show on March 3, 2016.

This story was featured in the March 2, 2016 edition of The Edina Sentinel.

“He was interested in it, had a passion for it,” said Second Judicial Circuit Presiding Judge Russell Steele, who appointed Judge Redington to take over the programs. “I had been doing it for 13 years and sometimes it’s nice to have a fresh face. He’s served on the State Board of Missouri Association of Treatment Professionals and he was very active in the Marion County Drug Court. I’m happy he has an interest in doing it.”

“I volunteered in Lewis County while Judge Westhoff was gone last summer. I enjoyed it. He and I started a discussion about doping it part of the time. From October until the end of the year I did a month and he did a month. Starting in January of 2016, I asked if I could just do it and he said, yes,” said Judge Redington. “(Judge Steele and I) had been talking about it for some time. I started doing the DWI Court program and the Drug Court program (in Adair County) on February 1, 2016.”

“The program is very intensive. It involves weekly court appearances and meetings with the drug court team members, both Judge Steele and Judge Westhoff had been doing it for a long time and they were ready for a break.

Those that participate in the Drug Court program are closely monitored.

“The obligations in drug court are: come to court weekly, go to treatment, individual counseling and group counseling at least twice a week, go to two self-help groups (AA/NA) two to three times a week, have urine tested randomly and at least twice a week, have a curfew (be home at 9:00 p.m.), give permission the Drug Court Team to come into the house and look around and make sure there are no drugs or alcohol on the premises,” said Judge Redington.

According to Judge Redington the Drug Court Team works closely with each other and with Drug Court participants. The team is comprised of the Judge, Probation Officer, Treatment Counselor, Case Manager, Tracker, Prosecutor and Law Enforcement Officer.

“One of the drug court team members is called a Tracker, her name is Jane Moore. She has a drug dog and can show up at their house any time on any day to check them out. They have to be ready to provide a urine sample, too. They also have to get a job or perform 30 hours of community service a week just so they get into the routine. We make sure they pay all of their court costs, restitution, child support and a $30 a month fee to help support the cost of the drug court,” said Judge Redington. “Because we’re meeting with them weekly, if they have a dirty UA they go to jail. No continuances. No delays. Usually 48-hours in jail. Then we bring them back and start all over again.”

According to Judge Redington, there are six participants from Knox County in the program, 14 in Lewis County and 26 in Adair County. Participants remain in the program for an average of two years.

“Do really well, get out early. Do badly, maybe have to stay longer,” said Judge Redington.

“Here’s why it’s worth doing. 93 percent of people who go to prison ‘come home’ when they get out. Twenty-none percent of the people who are just paroled end up re-arrested within six months. Sixty-seven percent are re-arrested within three years. So that’s two-thirds. The recidivism rate for people to be re-arrested, who have graduated the drug court program, is 8.7 percent,” said Judge Redington. “Two thirds are going back to jail. Put ‘em through the drug court program – when they graduate it’s less than ten. So the program works.”

“By the time most of the people in Lewis and Adair counties prepare to graduate they have more than 18 months clean. Not everybody makes it. A little less than 40 percent fail and end up going to prison. But the 60-some percent that make it thought the program have a job, are paying their taxes, are paying their child support, are being responsible members of the community,” said Judge Redington. “I helped start the drug court program in Marion County, when I was Prosecutor over there, almost ten years ago. I could count on one hand the graduates of that program that got re-arrested. I started out very skeptical, but I see that it works.”

“When someone graduates, I often give a speech. There are people at all levels who have had problems with additions and I give them examples of people like Oprah or Joe Walsh. Or celebrities who have not done well,” said Judge Redington. “Graduation day is my favorite thing and seeing someone who has gotten their life back on track and proven that they are beating their addiction.”

According to Judge Redington, a new Family Court program is in the works to be implemented in the Second Circuit.

“We’re working on an expansion to include parents whose children have been removed by the Children’s Division for abuse or neglect because of drug or alcohol addiction. That will probably be operational before the end of the year,” said Judge Redington. “There are 141 drug courts in Missouri – 92 of them are felony criminal, 12 family and 20 DWI courts. So we’re going to be one of the first family courts. All of those courts use behavior modification and treatment to try to get people back on track,” said Judge Redington.

If you want to learn more or hear from a few members of the Adair County or the Lewis County Drug Court Team tune in to KMEM Radio Station at 100.5 FM on Thursday morning, March 3, 2016.