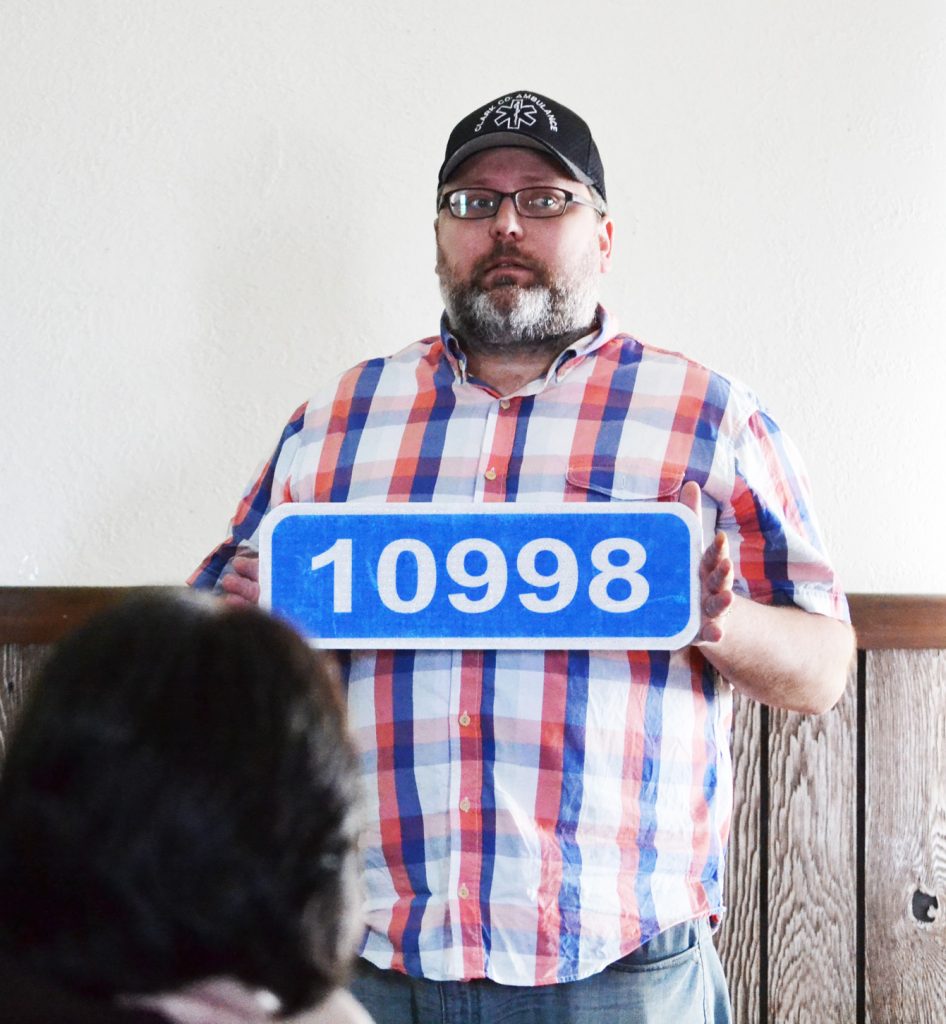 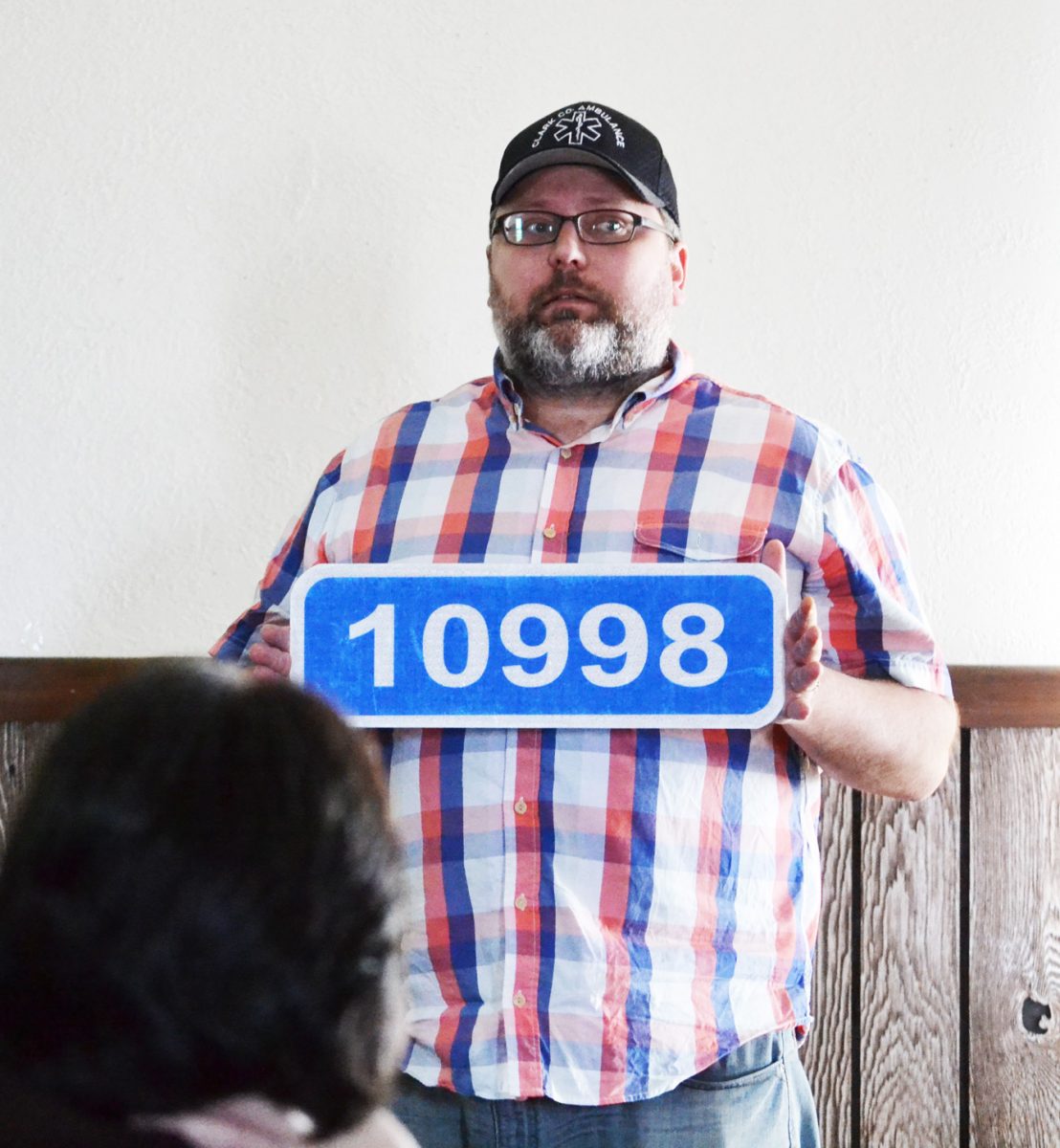 Clark County Ambulance Director Mike Koenig shows one of the five-digit 911 address signs that will be installed for both rural and in-town addresses in Clark County, beginning later this year.

Clark County’s move to 911 addressing was a surprisingly controversial topic at the special public meeting, held by the Clark County Commissioners on Tuesday, March 15. Clark County is one of only five counties in the state of Missouri without 911 addressing.

Over 50 people packed into the C.A.R.E Building for the meeting.

“Its purpose is to quicken the emergency response time,” said Presiding Commissioner Buddy Kattelmann. 911 addresses allow for faster medical and law enforcement responses in the case of an emergency, especially for those unfamiliar with rural roads.

Clark County Ambulance District director Mike Koenig explained that the 911 mapping would create GPS coordinates for every residence in the county, and that each residence would be assigned five-digit number corresponding to those coordinates.

“County road names in the county will not change,” Koenig said. “But your mailing address will.” Those changes will be coordinated with the United States Postal Service.

Those changes will not only affect residents in the county, but in the cities as well. In-town street addresses also will be replaced with the five-digit addresses.

“Almost all the mapping is done,” Koenig said. By late fall or early winter of 2016, the new signage should start being put into place.

“That was not how it was explained to us,” said Kahoka Mayor Jerry Webber.

The funding for the 911 mapping was also questioned.

“Its all coming out of the budget,” Kattelmann said. He noted that he had asked for some money from the Sheriff’s budget to help with the expense.

“They’ve asked, but I haven’t committed anything,” said Sheriff Paul Guadette. “I have to have enough for law enforcement.”

The upcoming vote to continue a sales tax vote on out-of-state vehicles, boat, motors and trailers also elicited much discussion.

“We cannot tell you how to vote,” said Kattelmann. “A ‘No’ vote means you want the county to keep getting the tax. A ‘Yes’ vote will discontinue the tax.”

At issue is about $206,000 in sales tax. Early in 2012, the Missouri Supreme Court ruled that the sales tax could not be collected on purchases of motor vehicles, boats, motors, and trailers from outside the State of Missouri. It did allow localities with a voter-approved “use tax” to continue to collect that revenue.

In July of 2013, Governor Jay Nixon signed legislation eliminating use tax on motor vehicles, trailers, boats and motors, and replacing it with a sales tax. That law required localities that had not previously approved a use tax to hold a vote before November 2016, to decide whether or not to continue the tax. Unless continuing the tax is approved, localities must stop collecting the tax in 2017.

“Right now its 25% for each one,” said Western Commission Paul Brotherton. “That can be changed.” Brotherton would not promise that the tax would continue to be used as voters previously approved, if the tax question on the April 5 ballot passes.

The City of Kahoka has a similar issue on the ballot, but the question is asked differently.

Kahoka voters will need to vote “Yes” to continue the tax.

Residents attending the meeting were split about whether to continue the tax. Some spoke out in favor of reducing the tax burden on residents, while others said the it didn’t amount to much individually, and the county needs the revenue to continue services.

The commissioners also presented a road improvement plan for 2016. The county has 533 miles of gravel road, and has divided it into five sections. This years, 25 miles in each of the five areas, or 125 miles total, will receive 300 tons of rock per mile. In about three years, all the roads will have received new gravel, and the rotation will start again.
Kattelman also asked for landowners help with the roads.

County Assessor Tony Daniel explained how irrigation systems will be taxed as personal property. Currently, there are 88 irrigation systems owned by 27 different farmers in Clark County. The amount of the tax will vary depending on the size of the system and its age. Contact Daniel for more information on the calculations for your system.

The commissioners also discussed county bridges. There are 121 structures in the bridge inventory. Of that, 36 are structurally deficient or functionally obsolete.

“Mainly that means they are too small for modern farm machinery,” Kattelmann said.

Field entrances and ditches were also discussed. The commissioners were encouraging farmers to use field entrances with drainage tube in place to enter fields. The county has a program in which the landowner purchases the tube, and the county will install it. This will prevent erosion, ditch damage, and soft spots in the road.

They also gave examples of landowners farming right up to the roadway.

Gary Webster, candidate for Western Commissioner, encouraged the commission to check into a ditch-clearing machine to clear ditches, and to enact rules requiring brush to be cleared back from roadways.

Sorry, there are no polls available at the moment.
Posted in Featured Stories