On Tuesday, May 31, 2016 a crew began tearing down Edina’s old Stage Coach Pizza building, located at 100 South Main Street on the southwest corner of Main and Lafayette Streets. The building, which is on the National Registry of Historic Places, was recently acquired by Terry Feldkamp, who is known throughout Edina for disassembling and salvaging the old Glove Factory.

According to Feldkamp, he acquired the building on or about Friday, May 27, 2016.

The demolition has begun post haste by Feldkamp and his three-man crew. Also, Mike Tague has been hired to tear down the building, according to Feldkamp. 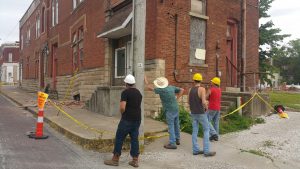 In a serendipitous accident, this reporter just so happened to be getting ready to take photos of the demolition. The crash was quite loud and ominous. It was the sound of a clump of concrete and dozens of bricks falling on a metal plate, which covers an old coal chute, embedded in the sidewalk below.

A video of what happened immediately following the crashing sound is available below. As far as can be seen the majority of the falling debris stayed within the closed off section of sidewalk.