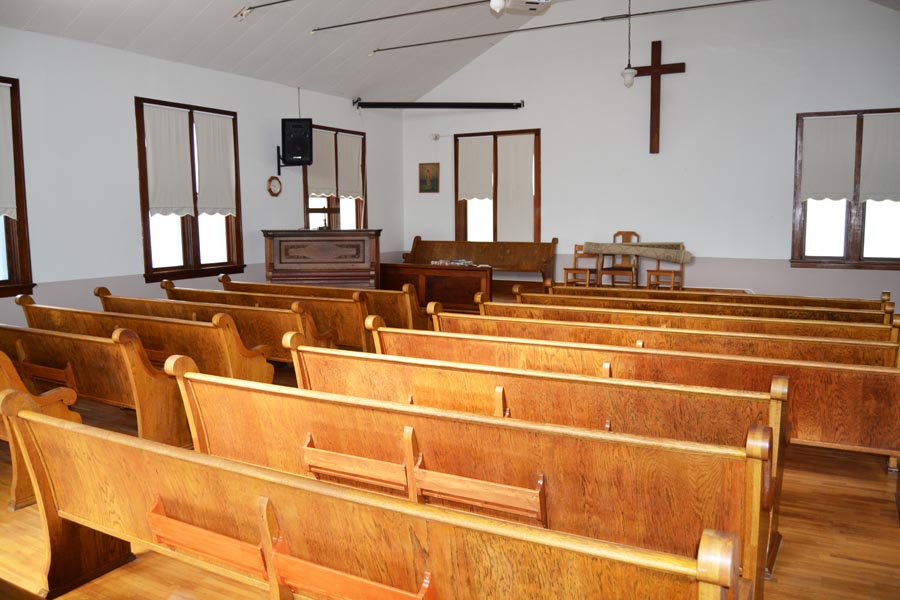 It was February 16th, 1856 when a small group of neighbors met at the home of James & Hannah Christy to elect Trustees for a new church at Peakesville. The group had been meeting at the Highland schoolhouse along with a Baptist group. But after many serious and sometimes bitter discussions between the Christians and the Baptists that had led to hard feelings made by hasty words too sharply spoken, the group had decided to build a church in Peakesville. The first chairman of the board was James Christy. Brother James W. Stevens was named Secretary and the Trustees elected that day were Brother Thomas Calvert, Brother Abraham Stauffer & Br. Alene Burke. The second meeting was on February 18th, 1856 and was formed to determine the financial support. The subscribers bound themselves to pay the amount annexed to their names to the trustees for the sole purpose of a new church building to be known as the Christian Church. The trustees were to have entire control of the said church house and the building was to be free to other denominations by permission of the trustees. $112.50 was pledged that day.

The village of Peakesville had been laid out just a few years prior by Mrs. Mary E. Peake. It consisted of twelve blocks. The streets running North & South were named West, Caldwell, Main & East Streets. The streets running East & West were North, Lafayette, Washington & Front streets. The church was built at the corner of Lafayette & East Street. The church was deeded eight lots in block six of Peakesville on September 2nd, 1857 from Mary E. Peake and her children, Arthur W. Peake, Edward T. Peake, Fauntleroy S. Peake, William O. Peake and Laura Peake for the sum of one dollar. Later lots one through four were sold off of the original deed.

The first building was constructed of brick. It was erected where the current church stands to this day. It was thirty two foot by thirty eight foot with no steeple. The pews were handmade benches without backs. There was no pulpit. The preachers stood on a low table to deliver their sermons. Rev. John Brinkerhoff, the first minister, continued to conduct services until 1864. Often the church was served by ministers who came on horseback with most of their earthly possessions in their saddle bags.

In the 1870s a tornado swept through Peakesville and damaged the building so severely that it had to be demolished. Interest increased and sixteen charter members of the church rallied and continued meeting. In a short time the membership increased to 79 members and the church was rebuilt.

The village of Peakesville was a prosperous community at the time, and had the railroad been constructed next to Peakesville instead of its current location, the village of Revere may never have existed. Peakesville
at one time had two store buildings, two churches, a doctor, a poultry house, three blacksmiths and a post office. Once the railroad was built, however, a large number of its residents moved to Revere and some of the homes were lifted and moved also.

The second church building was a framed building on the same spot but somewhat larger. The men of the congregation hauled the lumber and windows in wagons from Alexandria. The building had two front doors and a four foot petition down the middle of the room. The men and boys entered and sat on the south side of the church. The women and girls entered and sat on the north side. There were three large clear windows on each side, three kerosene lamps and a stove on the north as well as the south side. There was a three tiered pulpit and the pews this time were bought.
The building had a belfry and steeple. The bell cost $25.00 and was a gift of Hannah Christy, the widow of James Christy, the first Chairman of the Board. It was in her home that the church had originally been organized.
Soon afterwards an organ appeared. This caused one of the greatest differences that had ever been known in the church. Some members left and never came back.

Under the direction of Rev. V.T. Wood the church flourished during the early 1900s. During Rev. V.T. Wood’s ministry a new piano replaced the wheezy organ. The men of the church dug a basement room on the north side of the church and installed a furnace and lighting system. The church was the center of the community and each Sunday evening every seat was filled. People came in wagons, buggies surreys, & spring wagons. The young gentlemen, driving high stepping horses and new shiny buggies, were careful to wrap the lines around the church’s unique chain fence and in a very gentle manly way help the ladies to alight. Baptisms were done in either the Des Moines or the Fox River. There was always a children’s day program on the 2nd Sunday of June.

The ladies aid society (Christian Women’s Fellowship) was organized in 1907 and was always responsible for missionary giving and a lot of upkeep to the building. Barrels of fruit and clothes were sent to St. Louis orphans and the elderly home in Jacksonville Illinois. Peaksville Christian Church hosted the first Christian Church’s Clark County Convention in Sept 1907. Rev. Woods was the first county president. People arrived from all of the Christian Churches in Clark County from Wyaconda, Kahoka, Winchester, and Neeper.

In 1914 men of the church dug a basement under the church and a new furnace was installed along with a new lighting system.

In April 1922, lightning struck the church and it was completely destroyed. Not even a song book was saved. Hopes were low, but the congregation again arose to the occasion and the present building was dedicated in June 1923.
During the years the church has remained a faithful witness through two world wars, prohibition, the Great Depression of the 1930s, and numerous wars and conflicts. At one point, the membership picked up corn in farmers’ fields to keep the minister and bills of the church paid. The Peaksville Church was referred as a Sunday School Church for many years. It had services twice a month and Sunday School every week. The pulpit supply was often students from Culver Stockton College and in 1977, when Paul & Betty Rathbun accepted the position of Pastors at Peaksville, they were told by the district minister that they would probably have to help the church close gracefully. The faithful remained committed though and in 1993 the young people’s class decided to make a leap of faith. With Paul & Betty Rathbun’s guidance four men started to serve the church as laity ministers providing worship services every week.
In the 1990’s the church started focusing outside of its walls and never has the fate of the Peaksville Church been questioned again.
There have been three Timothy’s within the church. Jasper Gilbert was ordained December 15th, 1917 at the Pleasant Grove Christian Church near Center, Mo. He later changed carriers to teach music. Pastor Herbert Doty & Pastor Shawn McAfee were commissioned in May, 1998. Herb served until his passing October 2015. Pastor Shawn McAfee, (Great Grandson of Jasper Gilbert) serves the church today.

This year the Peaksville Christian Church recognizes its 160th year as a congregation.

The church is just completing its fourth and largest building project. In May 2015 ground was broken to add a sixty foot by eighty foot addition which includes a new dining hall, kitchen, bathrooms, classrooms and baptistery & stage. The 1923 building was lifted in the air and the basement foundation walls removed to lower the building to the same height as the new structure. This makes the church handicap accessible to all and provides the much needed additional room for fellowship and classrooms. The first baptisms were performed at Easter Sunrise Service March 27th, 2016. First was Corbyn Barlow followed by the Jameson, Landen, Christina & Mikele Farmer.

The Peaksville Christian Church is a Non-Denominational church and is not a member of any denomination or group of churches. They work in local and area missions as well as fellowship with the Christian Churches in Gorin, Neeper & Wyaconda and participate with the Clark County Ministerial Alliance. The church currently has two worship services on Sunday mornings; 8:30 and 10:45 a.m. with fellowship time and L.I.F.T. groups in between the two services (9:30 a.m.)
On June 5th the congregation will hold a Dedication Services for its new building and a Re-dedication Service for the1923 structure (lowered to ground level). The congregation will provide a large home-cooked lunch for all who attend the Dedication service that day and the local chapter of the Daughters of the American Revolution will present the church with a flag that will be raised that afternoon on it new flag pole. The congregation will join together in front of the church for a picture at 9:30 a.m. that morning, much like the congregation did at the 1923 dedication service.