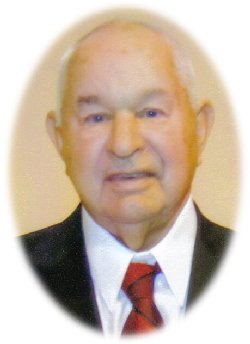 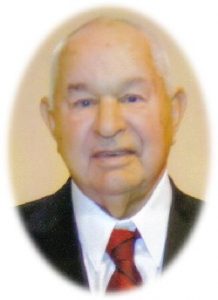 Theodore Eldon “Ted” Mann, of Edina, Missouri, passed away Monday, May 30, 2016, at the Boone Hospital Center in Columbia, Missouri.

Ted was born on December 19, 1931 in Peoria, Illinois, the son of Noble E. and Imogene Gertrude Leinweber Mann.

Ted and Bonnie lived in Shelbina, Missouri where he worked for Threkelds Plumbing, before moving to Edina, Missouri, in 1964, when Ted started working for MoDot. He retired in 1994 with 31 years of service.

Bonnie and Ted worked a Kettle Corn Stand for more than 30 years at local and regional events. They were members of the First Baptist Church in Edina, Missouri.

Ted is survived  by his two sons, Gregory Eldon and his wife Glenda Mann of Quincy, Illinois and Richard Dale and his wife Shelly Mann of Hurley, Mississippi; two daughters, Debra Jean Asbury of Little Rock, Arkansas and Janet Lea and her husband David Mitchell of Edina, Missouri; three brothers, Nobel William “Bill” and his wife Ruth Mann of Newark, Missouri, Fredrick Lee “Fred” and his wife Mila Mann of Fallbrook, California, and Daniel Emerson “Dan” and his wife Florence Mann of Fayette, Missouri; a sister, Gail and her husband Warren Forrest of Columbia, Missouri; thirteen grandchildren and 15 great grandchildren; along with numerous nieces, nephews, cousins, brother-in-laws and sister-in-laws, several foster children and a host of friends.

He was preceded in death by his wife, Bonnie Mann on June 1, 2103, a daughter, April Kay, in infancy; a great grandson, Joseph Aden Reaser and his parents, Noble and Imogene Mann.

A memorial service will be at 2:00 p.m. on Saturday, June 4, 2016, at the Doss Funeral Home in Edina, Missouri, with Pastor John Bode officiating.

The family will greet friends from 1:00 p.m. until service time on Saturday at the funeral home.

Burial will be in the Newark Cemetery in Newark, Missouri at a later date.

An expression of sympathy in memory of Ted Mann may be left to the First Baptist Church, the Knox County Cancer Fund, Clothes Closet or the Newark Cemetery.  A memorial may be left at or mailed to the Doss Funeral Home 208 N. 4th Street, Edina, Missouri 63537.