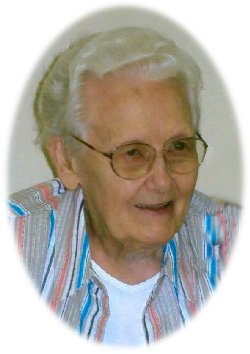 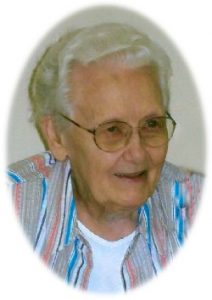 Born on April 30, 1919, in Lewis County, Missouri, near Williamstown, Fern was the daughter of William Elbert “Bert” and Lydia McClain Nichols. She attended Fairview Rural School, north of Williamstown, and graduated Valedictorian from the Williamstown High School in the Class of 1937. Fern was united in marriage to Dorsey Cleotis Small on July 15, 1937, in Williamstown, Missouri, and to this union five sons were born. They resided on a farm north of Edina, Missouri, where they raised their children. Cleotis passed away August 25, 1961 and she moved to Memphis, Missouri where she opened a café “Small’s Diner” for a few years and worked as a cook at the Scotland County Care Center for more than 17 years. Throughout the years she worked many places including, Dryden’s and Keokuk, Iowa; Davis­ Cleaver in Quincy, Illinois; Parthey’s Café in Knox City, Missouri, and Farm and Home, Thelma’s Coffee Shop, Maid Rite, and West Side Café all of Edina, Missouri. On April 14, 1986, in Kahoka, Missouri, Fern married Glen Gudehus and they resided in Edina, Missouri until moving to the Knox County RCF, in October of 2005, where Glen passed away on March 30, 2006. She later moved to the Scotland County RCF and then to the Scotland County Nursing Home as her health failed. Fern loved to bake pies and cookies and one of her greatest joys was having family around and cooking for them.

Funeral services will be at 2:00 p.m. Saturday, June 25, 2016, at the Doss Funeral Home in Edina, Missouri. Visitation will be after 12:00 noon, Saturday, with the family receiving friends until the service time. Burial will be in the Linville Cemetery in Edina, Missouri. Casket Bearers will be Dorsey Small, Dean Small, Scott Small, Steve Small, Richard W. Small, and David Small. An expression of sympathy may be left to the Linville Cemetery Association. A memorial may be left at or mailed to the Doss Funeral Home 208 N. 4th Street, Edina, Missouri 63537.