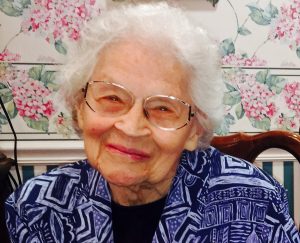 She was born in McFall, Mo., on December 18, 1919, the daughter of Dale Canady and Ruth (Allen) Ripley. Excelling academically, she skipped two elementary grades in one morning, later graduating with Carl’s 1936 high school class in Cameron. She attended Northwest Missouri State University at Maryville, receiving a teaching certificate after completion of a two-year program, and taught elementary school for two years in Fillmore. In 1940, she married Carl Miles in St. Louis and took up residence in Trenton, MJ, while Carl pitched for Connie Mack’s Philadelphia Athletics and supported the war effort. Mrs. Miles was a  homemaker and mother.

Mrs. Miles was active in Christian Women’s Fellowship and the PEO Sisterhood. She returned to school in 1969, graduating with a Bachelor of Education degree at Central College in Pella, Iowa, in 1971. She was a teacher evaluator for the Des Moines (Iowa) school District, typed Carl’s Iowa Education Department reports, worked for the National P.E.O. Sisterhood office in Des Moines, and worked part-time over the years in gift shops and children’s clothing stores.

She was an excellent musician and pianist who encouraged her children and grandchildren to put their inherited musical talent to good use. She taught Sunday school, Vacation Bible School, and even co-led a Cub Scout troop  in Centerville Iowa. Retirement took Norma and Carl to Horseshoe Bend, Ark. for 13 years, to Lenoir Woods in Columbia for 11 years, and to Lakeland, Fla with time to enjoy their grandchildren and a warmer climate.

A graveside service will be held at the Shelbina Cemetery at a later date with arrangements handled by Greening-Eagan-Hayes Funeral Home in Shelbina. Memorials may be given to Hawthorne Inn and the Cornerstone Hospice.