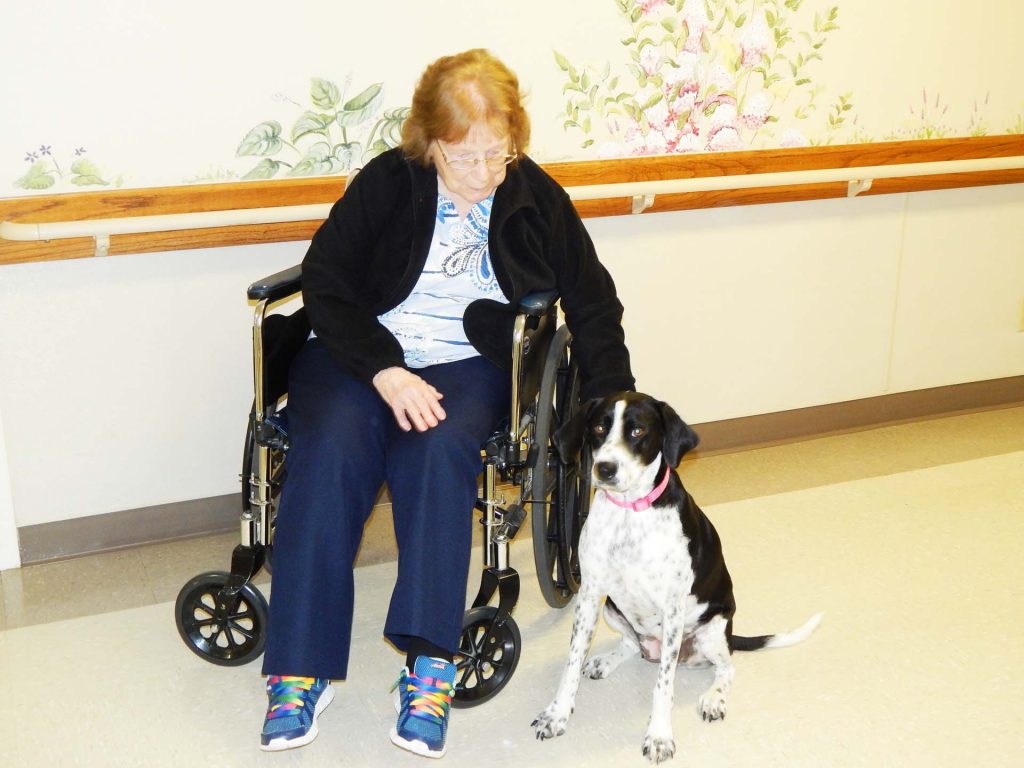 On Tuesday, August 9th, a new resident arrived at the Clark County Nursing Home, and during the short time she has been there she has made a great many friends and brightened a few days for her fellow residents.

This new resident is quite a bit different from her fellow residents in that she is somewhere between 2-3 years old. The biggest difference however, is that she is a rescue dog that is a hound mix. Her name is Janie.

The Nursing Home was required to pay an adoption fee which covered the cost of all shots, as well as microchipping.

Picking up Janie from the Fulton prison were nursing home staff members Denise Davis and Janice Johnson. While there, they also received training in giving commands and handling Janie.

Despite her young age, Janie has been very busy for the past 8 months she has been involved in the Missouri Puppies for Parole program. According to its’ website, “Puppies for Parole is a unique program made possible through our partnerships with animal shelters and animal advocate groups statewide. Selected offenders have the opportunity to become trainers to rescue dogs in the program. Offenders work with the dogs teaching them basic obedience skills and properly socializing the animals, making them more adoptable. Once the dogs have successfully completed the program, they will be adopted through their original shelter.

There are multiple benefits to this program. Puppies for Parole gives offenders the skills necessary to support successful rehabilitation and reentry, ultimately improving public safety. At the same time, this is an opportunity for the offenders to re-pay Missouri communities and repair some of the debts caused by their crimes.

The program also saves dogs’ lives. Many dogs that were unwanted and would have been euthanized have found forever homes through the program. More than 3,000 dogs have graduated from the program and have been adopted. Some of these dogs were specially trained to work with the disabled, special needs children, veterans and mental health patients.

Finally, Puppies for Parole uses no general revenue and operates solely on private donations and donations from offender organizations.”

According to Delma Smith, Activities Director at the Clark County Nursing Home, “Janie has had all the basic training such as sitting and shaking hands, but what makes her unique is that she has had what is called, “Man down” training. While going down the halls or visiting the rooms, if Janie would see someone on the floor she will bark. If no one hears her bark in a short time she will bark again. We believe she has adjusted very well to living here at the home. At night she is penned up but during the day currently she spends a lot of time in one of the offices, but she ventures out occasionally. The first thing every morning when we get here, Janie goes outside and then goes to room to room with a staff member who delivers “The Messenger” our daily paper that gives the weather and the activities for the day, so she sees everyone. Janie also attends all the activities and then there is some time for one on one visits. Janie is already having an impact on our residents, one of residents just wasn’t interested in getting involved with things or participating, but since the arrival of Janie they are happier and more content and just burst into a smile when Janie enters their room.”