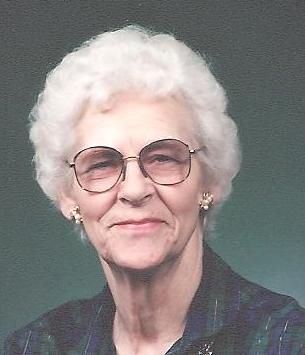 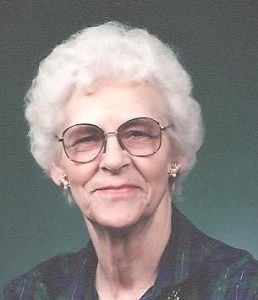 Born April 20, 1927, in Kirksville, Adair County, Missouri, she was the daughter of William Wesley “Wes” and Grace Ellen (Elliott) Pickens.

Also preceding her in death were her parents, two brothers, William Wesley “Bill” Pickens and Charles E. Pickens and one son, Harold B. DeWitt, Jr.

Anna Lou was raised in the Sperry area of Adair County, attended Trinity Rural school and graduated from Kirksville Senior High School with the Class of 1945 She attended Northeast Missouri State Teachers College (now Truman State University), and taught at rural school for a few years. After marrying, she and Bruce moved to Washington, Indiana where they resided for several years and returned to Kirksville in 1956 where they continued to raise their family, residing on farms most of their lives. When all of their children were in school, Anna Lou served as secretary to the principal at Kirksville High School principal for many years.

Anna Lou was a capable woman, homemaker and helpmate who lovingly cared for her home and family.  She enjoyed cooking and baking, reading, playing the piano and singing, crocheting, sewing and various crafts shared with family and friends.  Through the years she and Bruce were both devoted to working hard, raising their family and enjoyed time together.  They both loved to play various card games, sharing fun times and laughter with relatives and their spouses, church family, and life-long and cherished friends, including Bruce’s army buddies and their wives.

In later years, the bible study group Anna Lou faithfully attended was an important source of spiritual encouragement and friendship. Throughout her life she cherished the close and loving friendship she shared with her devoted sister-like cousins, Maurine (Pickens) Crawford and Faye (Pickens) Farmer. Together, in later years, they planned family reunions, gathered family genealogy information, and enjoyed get-togethers with relatives and their families.

Funeral services were held at Sunday, September 11, 2016, at Davis-Playle-Hudson-Rimer Funeral Home with burial in the Park View Memorial Gardens.

In lieu of flowers, expressions of sympathy in memory of Anna Lou De Witt may be made to the Faith United Methodist Church, Adair County Library in Kirksville, Missouri, or to Knox County Nursing Home in Edina, Missouri. Memorials may be left at or mailed to Davis-Playle-Hudson-Rimer Funeral Home.