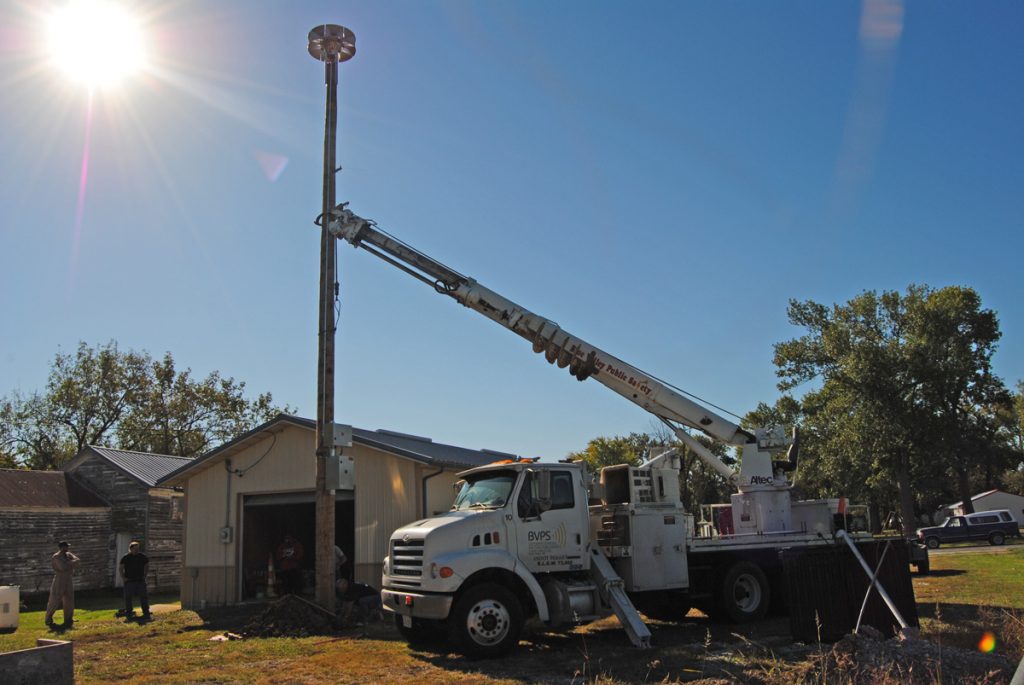 The following video was recorded by Echo Menges in Hurdland, Missouri, on Thursday, September 29, 2016 for The Edina Sentinel. Information about the new siren is included below.

According to information released by the City of Hurdland to The Edina Sentinel, after the bid process, the City Council chose to purchase the siren from Blue Valley Public Safety Inc. of Grain
Valley, MO.

Technicians from Blue Valley Safety Inc. installed the siren on Thursday morning, Septbember 29, 2016, on the northwest side of the Hurdland City Hall.

The siren is an Eclipse 8 Omnidirectional Siren. It is made of aluminum, has full battery backup capabilities and is 115 decibels at 100 feet. The distance the siren can be heard from is approximately one-half mile in every direction.

The City of Hurdland contributed $8,750 to the project and obtained an Economic Impact Initiative (EII) Grant for $10,675 from the USDA Office of Rural Development for a total cost of $19,425 for the siren.

The siren can be set off three ways: from the Macon County Enhanced 911 center; with a manual switch installed at the Hurdland City Hall; and with handheld mobile radios.

The new siren will go off everyday at noon and it will be tested every month by the Macon E-911 Center, weather permitting.

Other than the testing, it will only go off when a tornado warning is issued for the Hurdland area.

“The city started this process in June of 2015. The city felt that if this siren was to save even one life then it was well worth the money and time spent to get this project completed. We really appreciate LouAnn Rongey, USDA Area Specialist, for all her help in this process. We couldn’t have done it without her,” said Hurdland Alderman and Knox County First Responder Billy Whiles.