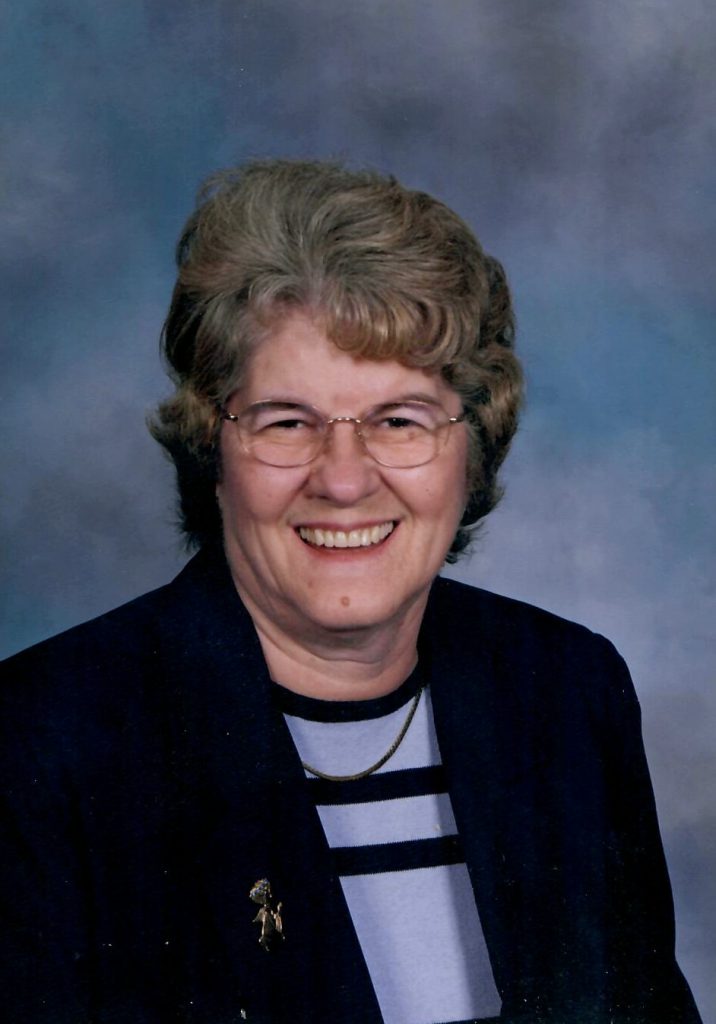 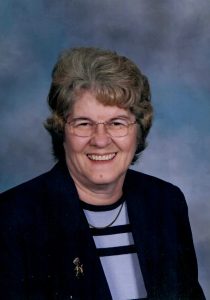 Lois Ann was born to the parents of Clayton and Theresa Goodwin on September 9, 1939.  She was the youngest of five children.  Her siblings are two brothers, Richard (who passed away April 10, 2016) and his wife Mary Margaret; Kenneth and his wife Marilyn; and two sisters, Betty Klote (Jerry deceased) and Reta Smith (Leo deceased).  On the day of her birth, her siblings were told to wait upstairs until they heard the baby cry.  At the age of two years and five months, Lois’ father died of a blood clot while recovering in Quincy from an accident at their recently purchased farm in Edina.  Her mother and the children stayed on the farm.  It was a group effort through the years and they all pitched in to help out – tough time’s tougher people.

Lois attended grade school at the St. Joseph Catholic School and graduated from the Edina High School with the class of 1957.  She married classmate Jimmie Ode Rice on October 17, 1959 with Donnie Campbell and Mary Hamlin Bishop standing up as their witnesses.   Lois, this time of year, would always tell the story of the lost and found ring on the way to the Priest’s house and how they were searching for it on their hands and knees in the leaves.  Jimmie Ode preceded her in death on February 4, 2001.  To this union two children were born, James Clayton (Melissa) Rice in January 1961 and Connie Jean (Roger) Johnson in February 1962.  Her children will forever cherish their memories, especially their childhood, with the most loving mother.  She was a kind soul, gentle with a loving touch, and always compassionate and caring.  She is also survived by Jimmie Ode’s sister, Norma Monroe; six grandchildren, Joseph (Danielle) Rice, Annie Rice, Will Rice, Patrick (Natasha) Johnson, David Johnson and Drennan Johnson; three great-grandchildren, Peyton, Clayton and Waylon Rice; and several nieces, and nephews.  She is also survived by her trusty poodle, Cinnamon, who started living with Lois in the fall of 2002.

Lois worked as a waitress, a nurse at the Gibson Hospital in Edina, and a clerk with the ASCS office until Clayton was born.  She started back to work outside the home in 1976 working for Jack and Julie McCurren at the license bureau/insurance office.  She also worked for Hawkins Insurance, Cahalan Ford, Little Jess Motors, and for Robert Huffman at the clipper shop after J.O. passed away.  She moved to Kirksville in September of 2002, right next door to her daughter, and worked briefly at Whitney Harrison Insurance which fortunately did not work out for her and she soon became a child care provider out of her home.  She became known as Nana to Faith, Dominic, Luke, Jaylyn, Isaac, Andrew, Kierra, Duke and several others she watched periodically.  She loved rocking and nurturing these children and she definitely had that “Nana touch”.  After her health declined and she stopped watching the children, she would see the little ones on occasion and she would just glow and come to life.  Her love for them was so deep.

Funeral services will be held 11 a.m. Thursday, October 13, 2016, in the Hudson-Rimer Funeral Home in Edina, MO.  Father Colin Franklin will officiate the services with musical selections: Send Your Best Angel for Mama, Take My Hand Precious Lord and I’ll Fly Away.  Burial will be in the St. Joseph Catholic Cemetery.

Visitation will be held after 4 p.m. on Wednesday, October 12, 2016, with family receiving friends from 6 p.m. to 8 p.m. in the Hudson-Rimer Funeral Home in Edina, MO.