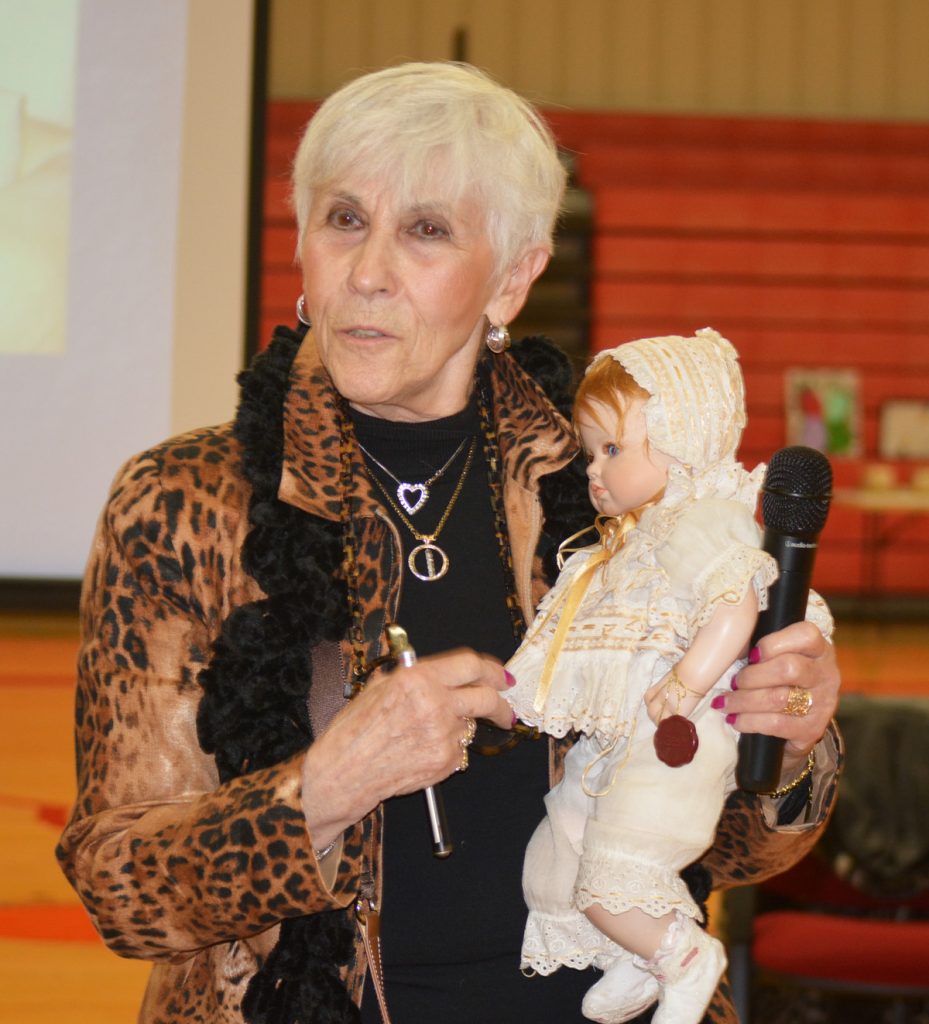 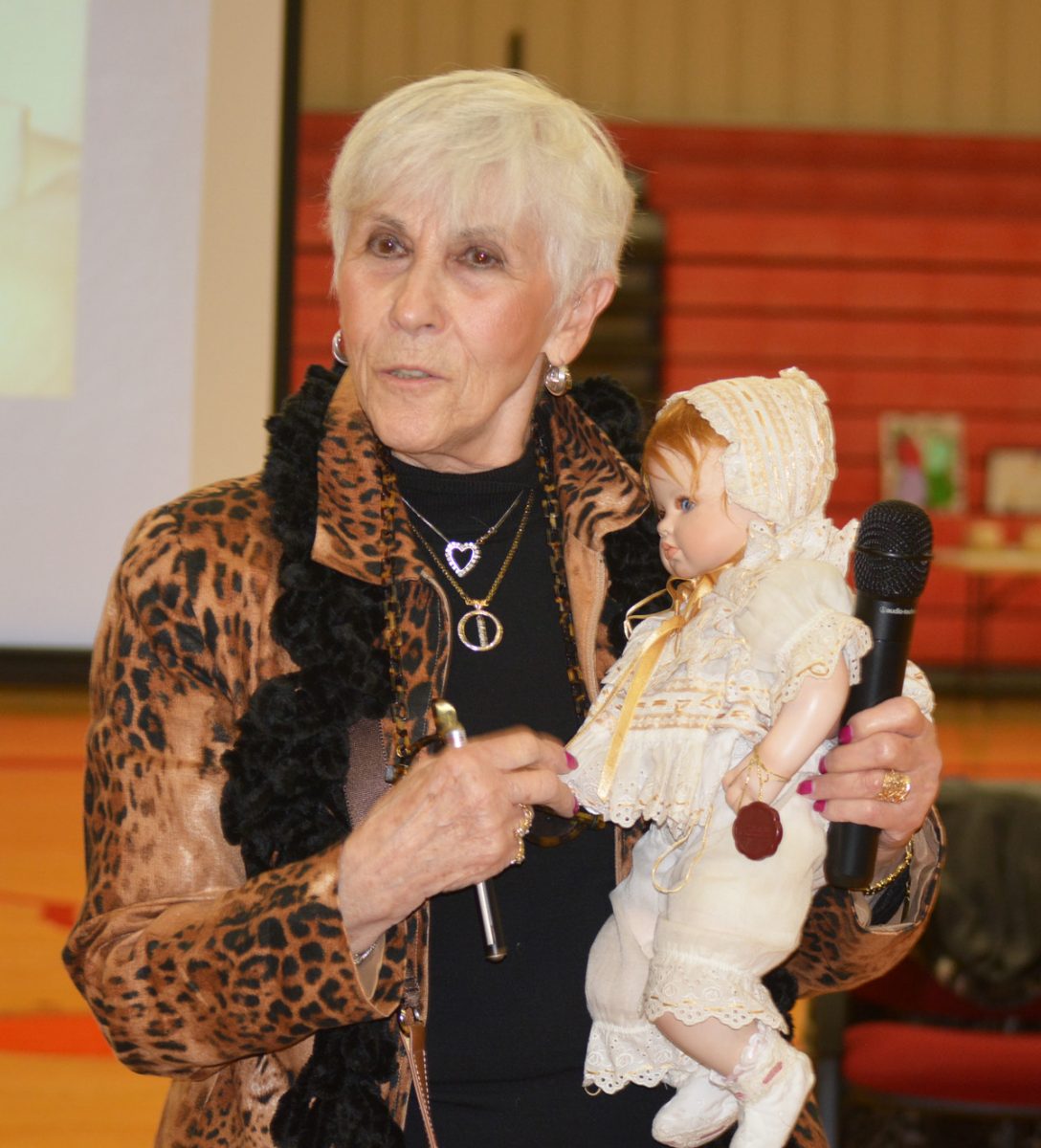 Rachel Goldman Miller, with her doll, Christine, as she spoke to Clark County R-1 students.

“I can remember fun, loving, singing, and eating candy,” Rachel Goldman Miller of Chesterfield, Missouri, told Clark County High School and Middle School students on Thursday, December 1. “ There was so much loving. We sang in French and Yiddish.”

Born in Paris in 1933, Rachel was the youngest of four children of Jewish immigrants from Poland. She was born in Paris, her parents and siblings were born in Warsaw. Her parents, Nathan and Helen moved the family to Paris so her father could avoid the anti-Semitism in the Polish army, and to be near other family members. They settled in the Jewish Quarter in Paris.

“You could get anything you could possibly want there, from an needle to a car,” she said.

Eventually, her father served in the French army.

June 23, 1940, is a date that still scares Miller “That’s the day the Germans came into France. They were welcomed with open arms, with flowers and champagne,” she said. It was part of a deal made by the government to keep Germany from bombing France.

“I ran upstairs and cried. Their uniforms were so frightening. It’s frightening to this day.”

Life under the occupation didn’t change much for the family–until August 20, 1941. French police and German SS officers came to the courtyard of the building where they were living, and started arresting Jews. Her father and uncle were taken.

At first, only foreign Jews were arrested. Native French Jews were supposed to be safe.

Her father and uncle were taken to an interment camp, and were eventually moved from hospital to hospital. She and her mother visited him on December 28.

“I was so excited, because I thought he was coming home in January,” she said.

On December 30, her mother visited him again. He told her that at 10am, he had been injected with something. He died in her arms that afternoon, one of the first Jews to be killed in what would come to be known as the Holocaust. Her uncle suffered the same fate.

“They say that the Jews went without fighting. That’s a myth,” Miller stated. Her brother, Adolfe, was among the resistance fighters in 1942. A female cousin, now 94, was stopped carrying guns and identification cards for resistance fighters. She was tortured, but never gave the Germans any information.

In the summer of 1941, she was sent to the country to live with a Catholic farmer.

“It must have been such a difficult thing to do, to send your child away not knowing if you’ll ever see them again,” she said.

Her sister, Sabine, was to follow a few days later, and she would bring Rachel’s doll, which she had left behind. Her mother told Rachel that her new name was Christine, and that she should not tell anyone she was Jewish.

“A day and a half later, the kids were talking about a big raid where Jews were being rounded up. I cried.”

Sabine never made it to the country. She and Rachel’s mother, Helen, were picked up on July 16, a day after Sabine’s 15th birthday. They were eventually sent to the Pithiviers camp.

“Imagine 17,500 people with only three bathrooms. The conditions were terrible. The Germans kept it covered with tarps so no one would see.”

At Pithiviers, a German soldier became infatuated with Sabine, and asked permission to marry the 15-year-old. Hoping it might spare her daughter, Helen agreed. Her hope failed. Both Sabine and Helen were transported to Auschwitz.

Upon arrival at Auschwitz, prisoners were sorted. Those “fit” were sent to the work camp, where they would try to survive on about 180 calories a day. Those under 16, or otherwise unfit, were sent to a room where they were told to remove their clothing, fold them neatly, and they would receive everything they would need in the next room. Unknown to Helen and Sabine, they would be gassed to death in the next room.  Their body cavities would be searched for gold, diamonds or other valuables, and their bodies were incinerated. Unlike those in the work camp, no death certificate was issued.

Her brother, Henri and Adolphe, died in the work camps of Auschwitz. Their death certificates said “myocardial weakness.”

While Rachel was still living with the Catholic family in the country, the Germans offered a 300 Franc reward for turning in Jewish children. A woman at the farm wrote to her aunt, Rose, who sent 300 Francs to spare Rachel’s life.

Rachel eventually returned to Paris with her aunt, Rose, arriving as French and German police were looting her building. She asked, and was reluctantly allowed to retrieve a few precious family photos from their apartment.

“I’m one of the few Holocaust survivors with family photos,” she said. Those photos were part of her presentation to students at CCR-1.

Back in Paris, she lived as a Jew, wearing the yellow Star of David. Jews faced an 8pm curfew, and could only grocery shop between 3-4pm.

“We were vermin. We were subhuman. We were not allowed to have anything,” she said. Aunt Rose was forced to turn in her radio, and a neighbor’s child had a tricycle taken away.

As things worsened, she hid in a cellar for days on end.

“Cellars aren’t like basements. It’s complete darkness, and there were rats. I lived in constant fear.”

“We always had hope that our families would come back,” she said. “Who would want to hurt them?”

Eventually, Rachel was sent to an orphanage with 60 other children, all Jews. After the war, only three parents returned.

She was rescued from the orphanage by an American soldier, a Jew, who brought her to America in 1946, to live with his wife and children. He molested her, and she was thrown out by the soldier’s wife, and thereafter lived in a string of foster homes.

She eventually met her husband, Milton, in one of those homes, and they were married for 47 years. They had two sons, Neil and Mark. Mark died of AIDS in 1992.

“It was my second Holocaust,” she said.

“My students have been reading “The Diary of Anne Frank.” I wanted to make it more meaningful to them,” Bertelli said. She made several phone calls, and eventually made contact with Miller, who speaks regularly at the Holocaust Museum in St. Louis, as well as across the state.

Bertelli’s class also created projects while studying the events of the period.   Those projects were on display in the gym during the presentation.

Clark County students were nearly breathless as Miller told her story. Afterwards, she answered a number of very earnest questions. One question focused on a doll she had on display.

Miller purchased the doll while visiting several of the notorious camps such as Auschwitz and Treblinka.   A companion later noticed that the doll had a nametag. Her name was…Christine.