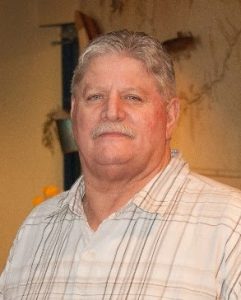 Michael Wade Varner was born December 26, 1955 in Ogden, Utah, and passed away December 21, 2016 in Quincy, Illinois.  He was the son of Travis and Peggy Scott Varner, who preceded him in death.

Mike was employed as the manager of the Ozark Steakhouse, near Newark, Missouri.
Mike was the proud father of two children; Ashely Renee Varner and William Travis Varner. He is survived by his son, Billy, and his grandchildren: Kelton Varner, Travis Dunn, Olivia Varner, Khylie Dixon, Phoenix Dixon, and Skylar Varner.
Mike’s passions in life included his family, teaching others by example, cooking, playing chess, and watching sports – especially LSU. His greatest passion, though, was living for the Lord. In recent years, those passions all came together in his work and life in the Heartland Community.
As a young father, Mike would take Billy to various ballparks, football fields, and basketball courts trying to teach him the fundamentals of sports. As Mike grew into adulthood, he began to understand that living for others and teaching by example was the greatest way to live.

Once Mike discovered the love of the Lord and the joy of serving others, he never turned back. His son describes the dramatic change in Mike’s life.
“If he said it, he walked it.
He wasn’t pushed by the winds.
He stood tall and strong as a tree.
Limbs strong. Roots stronger.”

Mike Varner will not be a man remembered for sermons or for speeches. More likely you will remember him for his smile. Or for his helping hand.

Burial was in Heartland Cemetery, near Newark, Missouri.