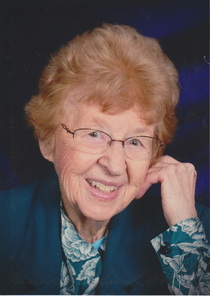 Born June 14, 1927 in Shelby County, Missouri, Opal was the daughter of Purley N. and Ora M. Holderieath Varner.  Opal attended elementary school in Plevna and Bethel, Missouri and was a 1945 graduate of Bethel High School.  Shewas a graduate of Gem City Business College in Quincy where she studied secretarial science and accounting.

Opal was alway an active member of her church, faithfully attending Sunday School and Worship services. She was a longtime member of Bethel Christian Church and later was a charter member of Faith Christian Church. She served Faith Christian as a member of the Jolly Seniors fellowship group and with several ministry teams, especially the In as Much Ministry in which she visited those in nursing homes, hospitals and shut-ins.

Opal enjoyed keeping in touch with her many friends, traveling throughout the United States and Canada, tending to her flower garden, reading and was active with the W.M’s Club at the YWCA.

Opal is survived by many loving cousins, neighbors, friends from churches and schools she attended and fellow employees.

Opal was preceded in death by her parents; and a sister in infancy, Della Mae Varner.

Funeral services will be held Tuesday (January 24, 2017) at 10:00 a.m. in the Zehender Robinson Stormer Cookson Funeral Home with the Rev. Henry Pratt officiating.

Graveside services will be held Tuesday afternoon (January 24, 2017) at 2:00 in the Pleasant Prairie Cemetery north of Bethel, Missouri.

Memorials may be made to Faith Journey Church.