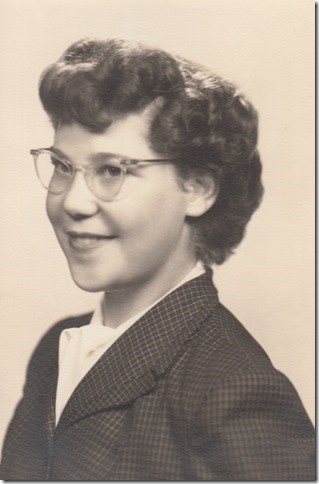 She was united in marriage to James Roscoe “Pard” Riffle on April 19, 1956. To this union were born two daughters, Renee and Mara.

Survivors include her daughters: Renee Riffle Cabe and her husband Brian, of Kahoka and Mara Daughtery and her husband, Robert, of Milton, IA; four grandchildren: Trevor Mattingly of Kahoka, Dason Riffle (Angela Howes) of Keokuk, Serena Riffle of Milton, IA and Lexia Daughtery of Milton, IA; brothers and sisters: Leander, Joseph and Francis Stammeyer all of St. Lucas, IA, David Stammeyer of Quincy, IL, Marie Schaufenbuel and Anita Herold, both of St. Lucas, IA; brother-in-law, W. G. “Gene” Daniel of Kahoka; as well as nieces and nephews and their families.

She was preceded in death by her parents; four brothers, Donald, Florian, Peter and Richard Stammeyer; and a sister, Margaret Stammeyer.

Following high school, Irene worked as a quality control inspector at Sylvania and attended community college in Burlington, studying business. She owned and operated Riffle’s Package Liquor and Tobacco in Kahoka and retired from the Clark Co. Nursing Home where she was employed for over 30 years, receiving certification as a CNA and also as a Medical Technician.

She was a member of St. Michael’s Catholic Church in Kahoka and the Ladies’ Altar Society. Irene loved being outdoors- tending to her garden and riding on her lawnmower mowing and looking over the animals on the farm. While riding, she would occasionally become entangled in a fence or other obstacle and flip the lawnmower, requiring assistance to life it off of her. This earned her the title “stunt driver” by her family (and caused them great concern). While she was an excellent cook, she was an equally talented fence builder. She worked hard and was not afraid of work, indoors or outdoors.

Irene was a self-taught, gifted and creative artist whether she was drawing, painting, sewing or crocheting. She did indulge in watching the Young and the Restless and was an avid fan of the St. Louis Cardinals. She would not back down from arguments with her son-in-law when talking Cardinals vs. Cubs. Irene was an advocate for anyone in need and generous with her time, talent, and money. She always gave to others quietly and without need for recognition. She was non-judgmental and a source of strength for her family and friends.

A Visitation will be held on Sunday, March 5, 2017 from 1 p.m. until 3p.m. at Wilson Funeral Home in Kahoka. Private family services and inurnment will be at a later date in St. Lucas, IA.