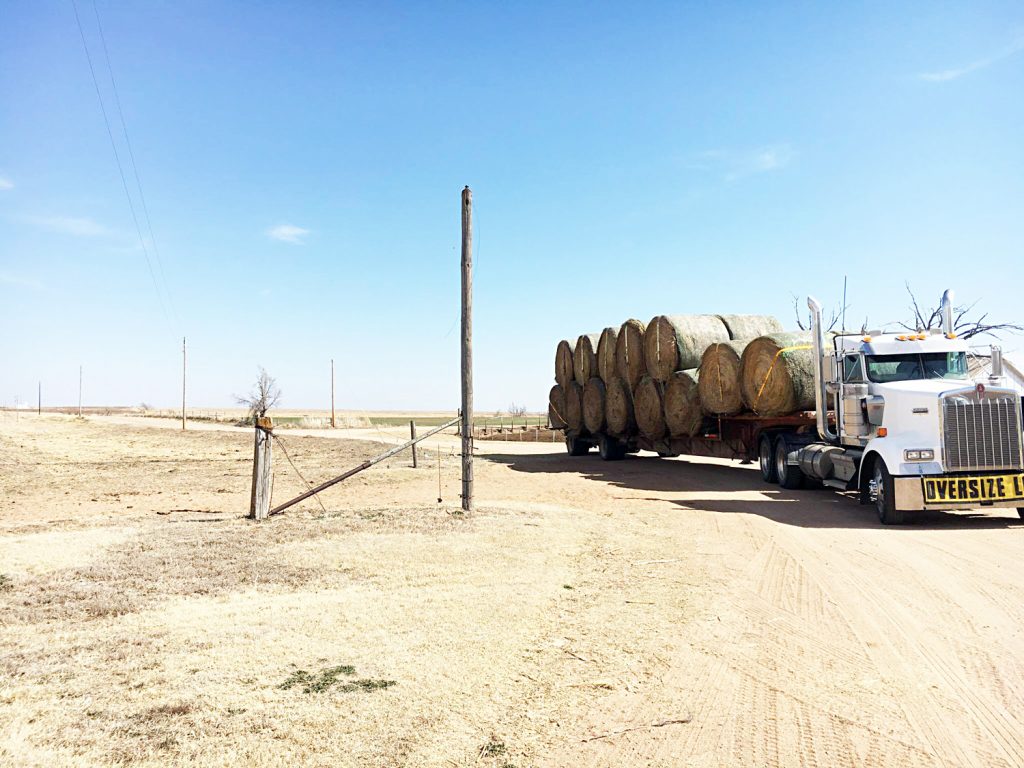 Many Kansas farmers and ranchers have been affected by the wildfires that occurred early March. There were 700,000 acres were burned.

Farmers from Shelby, Knox, Monroe, and Marion County have been hauling hay, gathering fencing supplies, or getting feed to assist farmers in the affected area.

Shawn McEwen, Leonard, stated, “I found out through some friends of mine in Farm Bureau that they were going to Kansas, so I got some more information from them and decided to help out.”

McEwen found out about the wildfires and devastation through Missouri Farm Bureau Young Farmers and Ranchers and the Missouri Department of Agriculture.

When asked why he decided to do this, McEwen stated, “We decided we have been blessed with good crops the past year and had the ability to help out, so that’s what we did.”

Brad Blaise, Jeremy and Shawn McEwen hauled three loads of hay on Monday, March 13, and met up with two friends down by Sedalia, who had two loads of hay. They took that hay to Clark County in Kansas.

According To Brad Blaise, Leonard, a trailer will hold 26 to 30 bales of hay.

Blaise stated, “There are just too many to say who have donated hay, feed, fencing supplies or even cash donations.”

The cash went to purchase fuel for the trucks, motels, fencing supplies, and feed.

On Thursday, March 16, Blaise was one of the many driving to Kansas to drop off hay, fencing supplies, and feed.   Blaise said that there was a 53 foot long trailer that was hauling fencing supplies and feed and there were seven loads of hay.

These supplies were delivered to Kiowa and Comanche counties in Kansas and part went up north.

“We tried to scatter around and help as many as we could,” added Blaise.

Blaise added, “There is still a need for help.”

Amy France, Kansas’ Farm Bureau’s Young Farmer and Rancher Chair, stated, “The outpouring of support from literally all across the United State has been staggering. Every day I receive several phone calls, texts, Facebook messages asking how people can help.

When asked how it made her feel to see strangers come all the way from Northeast Missouri to help in a time of need, France stated, “The odd part is they didn’t feel like strangers at all. Yes, they are strangers, but the common factor of those affected and those coming to help is compassion.

“These are good-hearted, hard-working people, coming to help others just like them.”

France came up with an idea to do care packages for the people who brought supplies, feed, and hay.

France posted a request on Facebook and had care packages in no time.

“These care packages were the least we could do to give back to them. We understand that they left their farms, ranches, and jobs a day or two to help these individuals that lost so much.

“It truly is a blessing to be a part of this, in any way possible. I’m thankful to be able to help facilitate these connections and allow people to be a blessing and to be blessed,” said France.