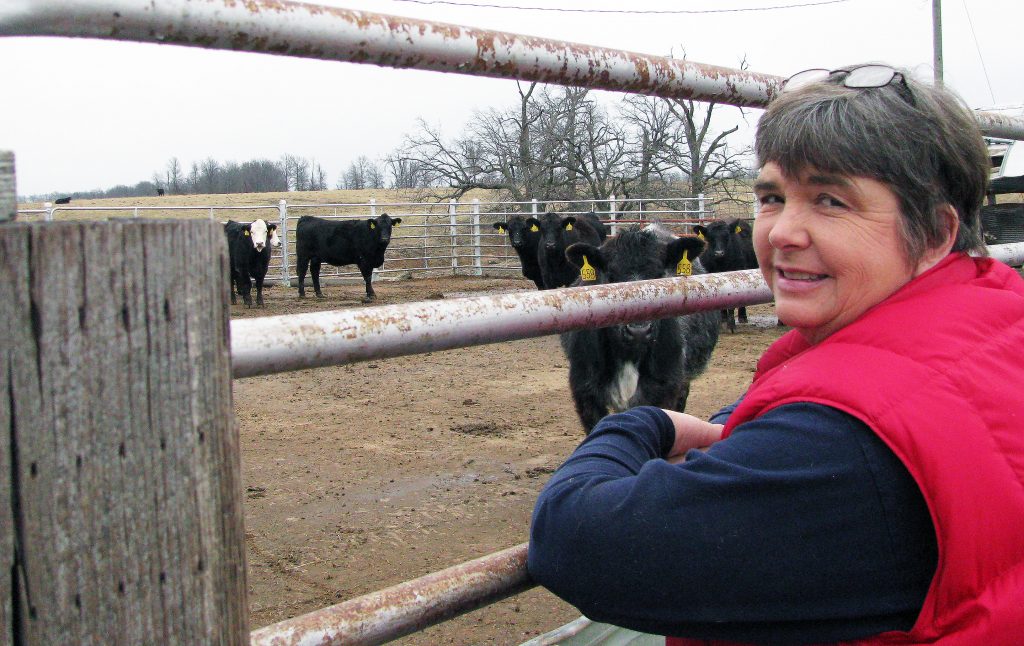 However, it is where you will find her during spring calving and weaning season.

Latimer serves cattle producers in northeastern Missouri. She joined the General Veterinary Clinic in Monroe City in 1987 after graduating from the University of Missouri College of Veterinary Medicine.

Most days, Latimer works from her rural Shelbyville home or her truck. Producers have her private phone number plugged into their cellphones. She is a ring away from a bawling calf or birthing cow, day or night.

She combines old-fashioned manners with new technology as she travels the countryside.

She is glad February is over. It is the month that most veterinarians dread. “Everything old and sickly tries to die in February,” she says.

Her first February in northeastern Missouri was no exception. “It seemed like I couldn’t save anything.”

Her mentor and boss, Jack Coleman, propped her up and told her March would come soon. He is a 1967 graduate of the MU College of Veterinary Medicine.

In 1987, Coleman took her on a sick calf call in rural Shelby County. The wobbly calf at the Kenny Latimer farm could not stand. The vet took to the calf and its owner. They have been married 23 years and have a 15-year-old son, Kirby.

Latimer was one of a handful of female veterinary students at MU. She grew up on a cattle farm at Morrison, Mo. Her father traveled for his job much of the time. She and her mother tended the farm and cattle. She wanted a career in agriculture. Veterinary medicine seemed a good fit.

When Latimer entered school, male veterinary students outnumbered their female counterparts. Historically, that had been the case since 1946, when MU established the veterinary school. Last year, 97 of the 120 students entering MU’s College of Veterinary Medicine were female. Latimer works with two other female graduates of the college, Monica Otto and Lauren Geiger, as well as Coleman and Kevin Kicker.

Latimer says she faced resistance from some male cattlemen when she joined the General Veterinary Clinic. “At first, a few were skeptical.” Their attitude changed as word spread about her skills. She says some of the same skeptics now say, “I don’t want anyone else.”

Veterinary medicine has changed in the 30 years since she started. Programs such as MU’s Show-Me-Select Heifer Replacement Program improved calving ease. The program cut in half the number of calves that need assistance during labor and birth. MU Extension also offers training sessions for producers to learn to pull their own calves when necessary.

Latimer says there are fewer cattle and fewer fences since she became a veterinarian. Fewer farms are locally owned and passed down through the generations.

She, her husband and son raise 250 crossbred cattle at their farm. Their family is active in the North Shelby FFA and 4-H. Latimer practices and shares what she preaches—using new methods based on research from MU’s College of Veterinary Medicine and MU Extension.

They were among the first participants in fixed-time AI in commercial beef herds in the state. Their demonstrator herd helped them share with other producers how to get more than 50 percent of their cows to conceive on the first day of the breeding season. This makes for a more uniform calf crop.

The program helps the Latimers improve profits and conception rates. Good herd genetics means fewer calf deaths and better calving ease. She sells open heifers to Show-Me-Select consignors and keeps some heifers back for her herd. This gives the consignor an opportunity to sell Tier 2 heifers.

Latimer says she was skeptical about the program at first. She used AI on only part of her herd. “I wasn’t going to trust that whole herd to AI and spend that kind of money,” the veterinarian from the Show-Me State says. The results proved to her the program’s value, and she agreed for her herd to be used as a demonstrator, or teaching, herd to show that university research worked on real farms.

Latimer works with livestock specialist Daniel Mallory in the MU Extension Center in Ralls County. He is a regional Show-Me-Select program coordinator. She also works with Dave Patterson, who heads the program. He was one of her professors at MU.

The Latimers recently installed cameras in their barns so they can check cows ready to calve. Technology helps aging farmers and those who want to avoid trips to the barn on cold nights, she says. They watch cows on a monitor from the comfort of their living room instead going out to the barn.

Latimer owns an ultrasound machine to do early cow pregnancy checks. She works with Scott Poock at the College of Veterinary Medicine to improve her “sexing” skills. The ultrasound machine gives producers the ability to verify pregnancy, estimate due date and find out the calf’s sex.

She was a doubting Thomas when Poock explained the ultrasound technology. “At first, I thought it was a joke,” she says. “But then I realized he was serious.”

It’s something she never imagined 30 years ago when she joined the clinic.