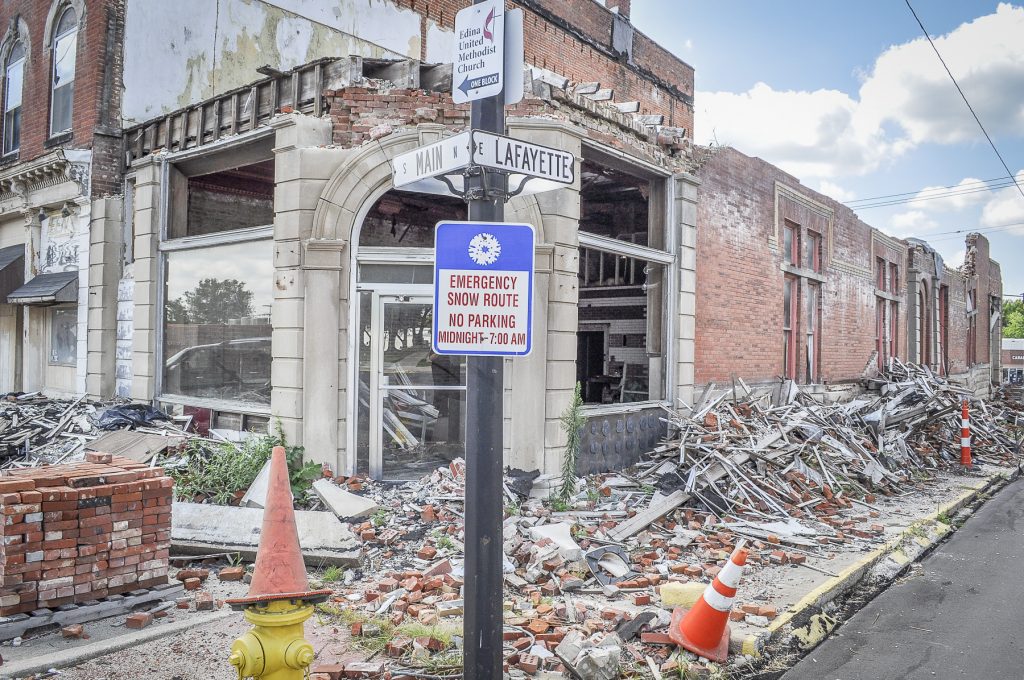 The Knox County Prosecutor Jo Fortney filed a criminal charge against the owner of 100 South Main Street in Edina, MO at the beginning of September.

Anita Woodburn, 54, of Birch Tree, MO, is accused of violating City of Edina Ordinance No. 548 after failing to maintain, repair or demolish a dangerous and dilapidated building.

Woodburn did not appear for court on Tuesday afternoon, September 26. Knox County Associate Circuit Judge Tom Redington issued a warrant for Woodburn’s arrest. A cash only bond of $2,500 has been set.

According to Edina Police Chief Ryan Bishop, Woodburn will be extradited to Knox County when she is taken into custody by law enforcement.

According to the criminal complaint filed by the Prosecutor, Woodburn was ordered to demolish or repair her building on the Edina Town Square on February 5, 2017. She is accused of being in violation of the ordinance since then.

Chief Bishop has been working to contact Woodburn and determine a timeline for when the building demolition would be completed. The building has been in a state of “partially demolished” since May 31, 2016. It has remained as a dangerous eyesore in the middle of the Edina Town Square ever since.

In the Probable Cause Statement filed in the case, Chief Bishop reported sending a certified letter to Woodburn on January 26, 2017 informing her of the ordinance violation.

The document states due to the significant safety risk and danger posed by this building, the City Council asked that she contact City Hall within ten days to advise the City on her specific intentions on the resumption of demolition activities. As of June 5, 2017 the matter has been ignored by Ms. Woodburn and continued demolition of the building has not resumed. Phone calls and written correspondence have yet to be returned. This building remains a serious safety hazard and major eyesore to the citizens of Edina and those that travel near the building.

The ordinance calls for mandatory repair or demolition of any dangerous building in the City of Edina. Violation of the ordinance could result in a fine of $100 per day – for every day the building owner is found to be in violation.

For this particular building, the violation period began ten days after the ordinance violation notice was mailed, according to Fortney.

“I felt like the building fit the ordinance of a dangerous and dilapidated building. Repeated attempts have been made by city officials and others in Edina to work with the owner of the building to finish demolition of the unsafe building, however, the owner has repeatedly failed to respond,” said Knox County Prosecutor Jo Fortney. “The city made every possible attempt they could before resorting to bringing it to me.”