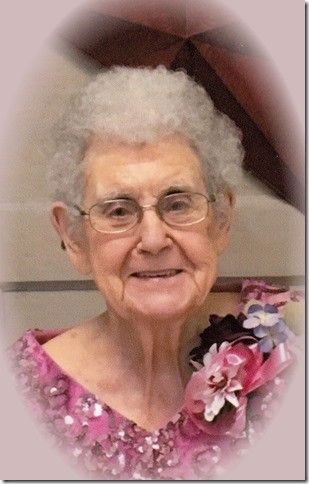 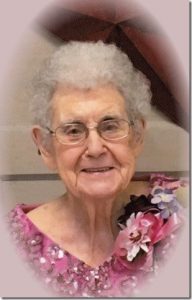 Dorothy R. Mesecher, age 92, of Kahoka, MO, passed away peacefully on Monday, September 25, 2017 at the Clark County Nursing Home in Kahoka where she had made her home for the past two and a half years.

Prior to her marriage, Dorothy was employed by Lomax Tomato Co. Together, she and Bill owned a grocery store in Disco, IL. The majority of her employment was in local restaurants where she was well known for her excellent cooking skills and friendliness and wit.
Her favorite job was being a farm wife and homemaker for her husband and children. She loved caring for them and cooking her special meals, most without recipes. They especially loved her homemade noodles and pies.

Dorothy loved people and stayed very active in her life. She was a proud member of the American Legion Auxiliary and proudly sold many poppies. She loved to play dominoes with her grandkids, play cards, drink coffee with her many friends, and participate in the events at the nursing home. She was a member of the Bible Baptist Church in Kahoka and especially enjoyed the Young at Heart activities. She was Baptised on January 1, 2012 at the Bible Baptist Church at the age of 86.

Funeral services were held Friday, September 29, 2017 at 11:00 a.m. at
Wilson Funeral Home in Kahoka with Pastor Glen Yoder officiating. Special music was “Precious Lord, Take My Hand” and “I Wanna Stroll Over Heaven”.

Burial was in the National Cemetery in Keokuk, IA.

Visitation was held at Wilson Funeral Home after 9 a.m. Friday with family receiving friends from 10 a.m. until time of services.

Memorials were suggested to the Clark County Nursing Home Activity Fund or the Bible Baptist Church.