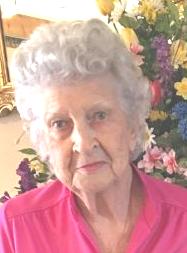 Kathryn Marie Hackemack, age 92, of LaBelle, Missouri, passed away Tuesday, October 3, 2017, in the LaBelle Manor in LaBelle, Missouri.  Born on December 8, 1924, in Lewis County, Missouri, Marie was the daughter of John (Charlie) and Kathryn Doran Roberts.  She was united in marriage to Frederick George Hackemack on March 23, 1946 in Quincy, Illinois, and he preceded her in death on June 14, 2017.

Marie was also preceded in death by her parents.

Marie received her education in Lewis County.  She was a housewife and homemaker.  She and her husband were engaged in farming all of their married life in the LaBelle area.  Marie loved flowers, cards, her cats, gardening, cooking and spending time with her family.

Memorials may be made to the Arthritis Foundation or the LaBelle Nutrition Center.  Memorials may be left at or mailed to Coder Funeral Chapel, P.O. Box 151, LaBelle, MO 63447.