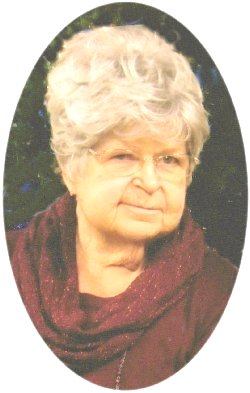 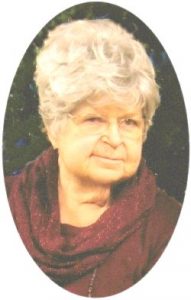 Roberta Ewalt Agee was born at the family home, near Bridge Creek in Knox County, on February 14, 1930. She was one of eleven children and was the oldest daughter. She attended school at Island school and later taught there. She married Ralph Agee on February 23, 1951, and they made their home in Colony. She ascended into glory on October 25, 2017.

Roberta was preceded in death by her mother and father, Nellie Rae and Fred Ewalt; her husband, Ralph Agee; her brothers, John, Charlie, Byron, and Albert; her sisters, Anna Louise and Carol Pemberton; and her brothers-in-law, Bill See, Oscar Pemberton, and Roger Gipson.  Roberta is survived by her daughter, Cindy (Bob) Maddex and their children Heather (Josh) Jordan and Dan (Jessica) Maddex; and her son, Ralph (Jan) Agee and their children, Lisa (Jeremy) O’Dell, Lori (Todd) Kenney, Brett (Laura) Agee, and Lydia Agee; and thirteen great-grandchildren, with one on the way. She is also survived by two brothers, Roy Lee (Mary Lois) and Garland (Betty) Ewalt; two sisters, Jewel See and Alice Gipson; a sister-in-law, Barbara Ewalt; many nieces and nephews; and numerous Eastern Star Sisters and Brothers.

Roberta lived a full life of service and hospitality in Colony, Knox City, Edina, and the Knox County Care Center where she became known as the Welcome Wagon.  Everyone was welcomed with one of her special bracelets she made. She taught School at Island, helped Ralph drive the school bus for 45 years, was the Colony 4-H Community leader, a 4-H clothing leader, and enjoyed sewing, and making bracelets and necklaces that her greatgrandchildren loved.  She was always there to offer a neighborly helping hand to all.

She was also a member of a Prayer Group, taught Sunday School for the teens, created programs for 4-H Share of the Fun, Easter and Christmas programs at church, and many Eastern Star Ceremonies. She also enjoyed being a United Methodist lay speaker. Her passion was her love of the Order of the Eastern Star. She was a 64-year charter member of Colony OES # 543 and a duel member with LaBelle OES # 316. She especially loved nurturing new sisters and brothers and was still getting petitions at the age of 87. She was Worthy Matron more times than she could remember, served as Grand Chaplain, and a Grand Representative of Delaware. She attended Grand Chapter every year she was a member except for one due to poor health. Roberta’s motto was “When hands reach out in friendship, hearts are touched with love.” She certainly was a friend to all and touched all our hearts.

Burial will be in the Colony Cemetery in Colony, Missouri.

An expression of sympathy in memory of Roberta Agee may be left to the Colony OES Lodge, LaBelle OES Lodge or the Knox County Nursing Home.  A memorial may be left at or mailed to the Doss Funeral Home 208 N. 4th Street, Edina, Missouri 63537.