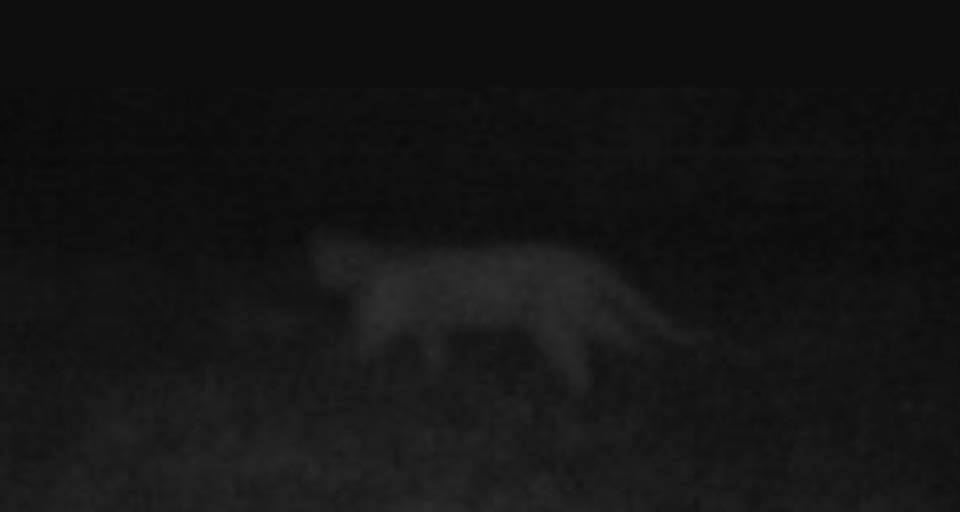 By Robin Shores and Marlana Smith

Last week, a Shelby County woman issued a public statement on Facebook warning people and neighbors in Clarence and Leonard of a mountain lion attack on one of her horses.

Tara Goodlett, of rural Clarence, raises and cares for show horses, which she keeps near her home.

According to Goodlett, the attack happened Thursday night, October 19, but she didn’t realize it until the next day.

“We have four roosters that run loose in the back yard. We have a pair of blue heelers that will let you know when a coyote is back there. When that cat comes through, everything is silent. The night the horse got attacked, we were outside, but we did not realize what was happening at the time. The horses were going crazy, everything else was quiet. My friend, Taylor Hatton, went and checked the horses (the next day) and came back saying, I don’t think he’s walking right. The farrier came, and he had to gather all the horses in, and saw that Tuxedo was covered in blood,” said Goodlett.

Tuxedo is a show horse, saved from a slaughter house in Mexico, Missouri, in August.

“Tuxedo is blind in one eye, which made him an easy target,” said Goodlett. “Tuxedo has claw marks on his back legs, his chest, nose. You can actually feel the attacker’s claw marks. He also has a puncture mark on his front right foot, which got down to the bone, which you can see. He did not have to receive stitches. We have been giving him shots and antibiotics. He got tetanus shots and is on pain medicine for his leg.  He is going to come out of it, but it’s just disheartening.”

Goodlett was exposed to a mountain lion growing up.

“When I was a teenager, my parents rehabilitated a mountain lion. I literally had one in my house. She weighed over what my Doberman weighs, so I know what they sound like,” said Goodlett. “I started telling my boyfriend, in August, I heard a cat chirping and I thought the noise came from north of the house.”

Goodlett has four trail cameras on her property. She and her boyfriend, Kyle Chinn check them regularly.

“The camera we actually caught the mountain lion on was just north of the horse arena. There is one picture that shows Kyle just leaving from feeding the horses and four minutes later the mountain lion came through,” said Goodlett.

Goodlett posted two trail camera photos and four photos of her injured horse with a warning on Facebook, on early Sunday morning, October 22.

Jamie Smith, of Shelbyville, saw Goodlett’s Facebook post regarding the attack on her horse and compared injuries on two of her horses with injuries sustained by Tuxedo.

“Both of my horses were attacked on Thursday night, August 17. The wounds on Tara’s horse are similar. I actually had my girl horse lose part of her hoof. She must have been kicking to protect herself and my other horse, which is very old and is an easier target. He had a deep laceration on his throat and both horses had marks all over the tops of the backs and sides that did not cut in deep, but, you could see the claws had just grazed the hide,” said Jamie Smith.

“We had the game warden come out here and he claimed it was not a mountain lion, because the horses would have been way more torn up in his opinion. We walked the entire premises and there was no blood anywhere besides all over the middle of the pasture.  I’m almost positive the only way they weren’t hurt worse is because of the fight or flight instinct in horses. If they cannot run away from the danger. They will fight – my mare definitely would do some harm,” said Smith.

After reviewing the Goodlett case with the Shelby County Conversation Agent and MDC Wildlife Damage Biologist, they were unable to confirm Goodlett’s horse was attacked by a mountain lion.

“Nothing has been confirmed at all yet,” said Shelby County Missouri Department of Conservation Agent Kevin Lockard. “(From) the pictures we’ve seen, it doesn’t look like an animal attack. It doesn’t do any good to have zoomed-in pictures of animals, we need the original shot. The picture is zoomed in so far we can’t what it is. One of the pictures is a coyote and the picture that is actually a cat, we don’t know whether it’s a house cat or a mountain lion because it’s so zoomed in.

We are waiting for the original trail cam pictures and we have seen them. I sent the photos to our damage biologist and he is the one that said it’s not animal attack. It looks like barbwire.”

According to Lockard, he has been unable to reach Chinn, visit the property where the attack allegedly occurred, inspect the trail cameras or the original memory card.

“I called Kyle two days ago (October 23) and we were supposed to go out, and he has never called me back,” said Lockard.

Daryl Damron, Wildlife Damage Biologist with the Missouri Department of Conservation, said, “The case is ongoing around Clarence and Shelby County. One of the pictures appears to be a cat. I don’t know what kind of cat. The pictures that I have seen have been enlarged. It’s hard to say where the pictures came from. We’ve asked for the SD card, so we can have the original.

“We do try to respond in a timely fashion and as accurately as we can. We take a picture that is given to us and we try to confirm or deny based on the original picture. And, you do that with silhouettes and other tools of measurement, put it in the same place that the picture was taken, determine the size of the animal and (make sure) the background is actually accurate and that the picture is actually taken in Missouri and not somewhere else.

“I’ve been a biologist for 17 years. The pictures I’ve seen show horses that are damaged. I have gone to farms and looked at multiple horses that were damaged. This is actually very consistent with fence damage and debris damage and something other than an attack by a mountain lion. We have studied mountain lions all over the United States and went to training in different states and where mountain lions (attacks) have occurred. The (only) time they have really attacked horses was out in northwest California. They don’t attack horses with any regularity.

“It’s a dangerous animal for mountain lions to try and kill. Mountain lions don’t attack domestic animals like horses or cattle. (They attack) sheep and goats. I haven’t seen a documented horse attack by mountain lion. I’ve seen documented attacks and pictures of mountain lions (that have) attacked full grown elk. Mountain lions usually attack the trachea with their mouth and hold onto the back of the neck with both front paws and they hang there until the animal is calm and their trachea is crushed and they suffocate. That’s how they usually kill an elk-sized animal.

“There is no slicing, gouging, scratching. It’s holding on with their mouth on the throat of an animal and hangs there until the animal succumbs. It usually takes about three to four seconds. It happens really fast. They are not African lions. They don’t run around and slash and climb up on the top of an animal’s back. On a deer sized animal, usually they bite the back of the head and crush the skull. They can’t get on top of the animal if they are bigger, they can’t manhandle an animal.

“Claw punctures on top of the neck, the top of the head, a solid bite around the trachea. So that’s how they have to kill an elk, so I assume that is how they would have to kill a horse. When they kill, they don’t miss. They are a lazy animal. They don’t have any lung capacity. They don’t run. They can run for a short blast really fast, but they don’t chase animals down to kill them.

“We try to get to the bottom of these things. Mountain lions are trying to recolonize Missouri. There is no doubt about that. We have had 69 confirmations in the last 15 years. They are young males and they don’t stay in one place very long. They leave a lot of signs when they are around. They eat a deer sized animal every 10 to 14 days. When they are around, they aren’t hard to find.

“We have seen some deer pictures and we’ve seen some mountain lion pictures on deer cameras. We have had a lot submitted to us that turned out not to be mountain lions. The size doesn’t match up or you can’t verify where the picture was taken. It may have been taken somewhere else. Without a time stamp on that picture, how do we know when it was taken or where it was taken? If you can’t verify where, or have a time stamp of when –  then it’s kind of a hearsay picture.

“I would like to have the original photo taken. The best way is to have the SD card, and we will give it back. Let us look at that and verify it and go to the site and verify that the animal picture was taken where they say it was taken. We are not trying to cover anything up. We document them. And when they occur or attack something, we want to know about it. I would be willing to visit Goodletts. Sometimes it’s easier to prove what didn’t do it based on my experience than what did.”

Goodlett told the reporters her suspicions were confirmed by a large animal veterinarian in the region. However, we contacted that veterinarian. He denies ever seeing Goodlett’s horse or speaking with Goodlett about any mountain lion attack on any horse – ever.

“Believe it or not, we are spoofed a lot because pictures are taken off the internet and (sent to) us. “(People) say, ‘these pictures were taken in my backyard.’ We just don’t know a whole lot about that picture. I am not convinced that the picture is of a mountain lion. It could just be a cat. And if it is a cat, is it a house cat or a mountain lion? Based on the size of the blown-up pictures, it’s hard to say. A lot of things here are not lining up to be consistent to a true mountain lion attack on an animal.

“Sure, there is a lot you can speculate about. I don’t know what happened to the horse. It doesn’t appear to be an attack by a wild animal of any kind,” said Damron.

Goodlett showed the reporters pictures on her phone of what she thought was a mountain lion. Goodlett told them she would send those pictures, but they have not received them – nor have they been able to reach her since being in contact with her on Thursday, October 26.