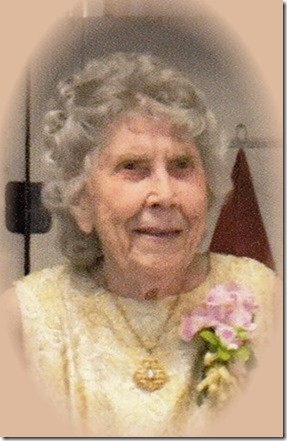 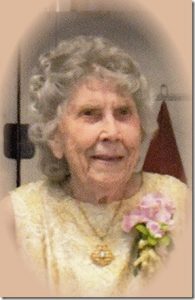 Rachel Maye Steele, age 95, of Kahoka, formerly of Wayland, passed away early Sunday, October 29, 2017 at the Clark Co. Nursing Home in Kahoka where she had been a much-loved patient the past three years.

Rachel Maye was born May 23, 1922 in Wayland, MO, a daughter of Albert and Ruby Woods Burke who died when Rachel Maye was born. She was raised by her aunt and uncle, Bill and Minnie Burke who were lovingly referred to as “Daddy Bill” and “Aunt Minnie” by all who knew and loved them.

Rachel Maye graduated from Wayland High School and married the true love of her life, Ernest F. Steele on March 11, 1943.

Rachel Maye was content as a housewife, caring for her husband and her army of four legged cats who were like her children, and putting in large gardens. She was a faithful member of the Wayland United Methodist Church, a member of the Royal Neighbors of America O”Donnell Camp # 9029, the United Methodist Women, “Stitch and Chat” club and the Better Home Builder’s Extension Club. She met weekly at her church quilting for the benefit of the church. She was also a talented artist and wrote many poems and stories.

She is survived by her sister-in-law and family, Barbara Steele of Keokuk; two cousins, East (Beth) Burke of Kahoka and Betty Blaize of Baton Rouge, LA; her church family, her nursing home family and many who loved her.

She was preceded in death by her dear husband, Ernie; and her parents; “Daddy Bill” and Aunt Minnie.

Funeral services were held Thursday, November 2, 2017 at 2 p.m. at Wilson Funeral Home in Kahoka. Special music was “He Touched Me’” and “Precious Lord, Take My Hand”.

Visitation was held at Wilson Funeral Home after 9 a.m. Thursday with family receiving friends from 1-2 p.m.

Memorials in lieu of flowers were suggested to the Wayland United Methodist Church, the Clark Co. Nursing Home Activity Fund, or the PAW Animal Shelter at Ft. Madison.