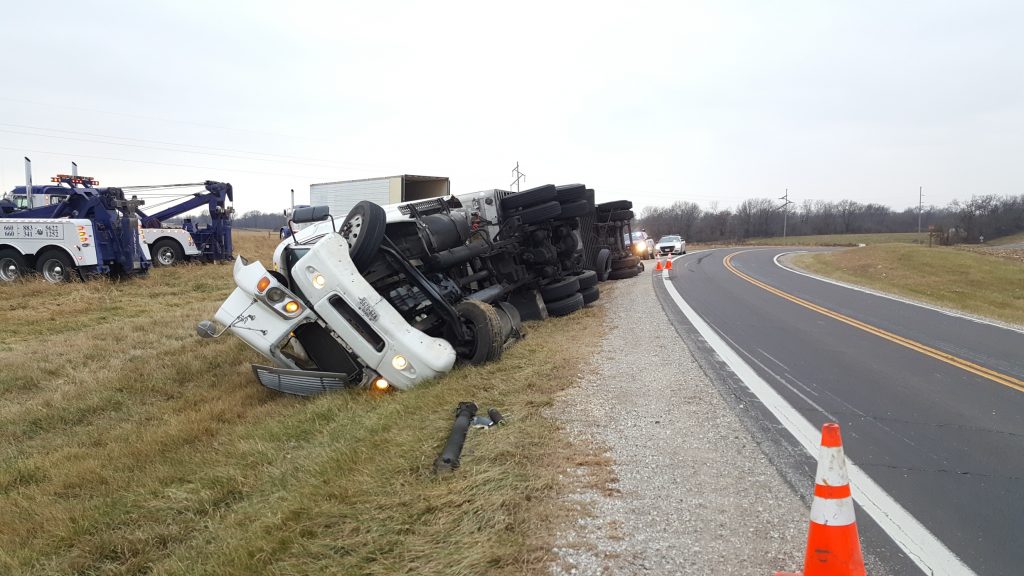 A Texas man walked away from a tractor trailer crash on Highway 6 west of Hurdland, MO early Thursday morning.

Driver Don Young, 60, of Grand Prairie, TX, was traveling from Kraft Foods in Kirksville, MO to Pennsylvania with a trailer full of meats and cheeses.

Young was eastbound on Highway 6 less than a mile from Hurdland when his tractor trailer traveled off the south side of the roadway and overturned. Emergency responders were called to the scene of the crash at approximately 4:45 a.m., according to representatives of the Hurdland Volunteer Fire Department.

According to Young, he was looking at his global positioning system (GPS) trying to find a nearby truck stop because he had a headlight out and was finding it hard to see.

“I only took my eyes off the road for a second and that was it,” said Young after the crash. “I didn’t see the curve coming up.”

The tractor trailer came to rest on the passenger side in the ditch next to the highway after being heavily damaged during the crash.

Young had to climb out of the cab after breaking the driver’s side door window out. He was not injured in the crash.

“I was almost all the way out when someone came by and pulled over,” said Young. “I had to climb up the dashboard, steering column and steering wheel to get out.”

Lakeside Towing was still removing the contents of the trailer at the time of this post (11:00 a.m.). The load of meats and cheeses were being loaded into another tractor trailer to be taken back to Kraft Foods.