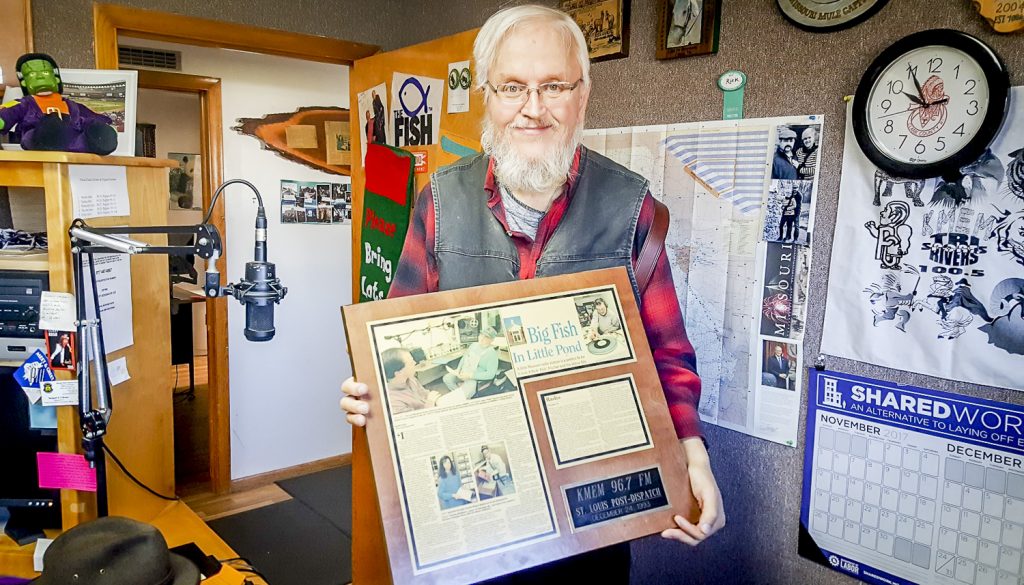 After over 36 years in the radio business, Rick Fischer, KMEM’s News and Programming Director, is retiring at the end of the year. Fischer, one of the station’s original employees and most well-known personalities in Northeast Missouri, is departing with a lifetime of memories, stories and accomplishments centered around his career as a radio broadcaster.

Fischer and the staff at KMEM have been keeping the news about Fischer’s coming retirement quiet, only announcing the thought-out plan to retire last week online and on air by inviting the community to come in and share their memories of him at the radio station on his last day.

At the time of his interview with The Edina Sentinel, only a handful of people knew of his plans. The logistics of his retirement party were still being worked out and his co-workers remained dutifully protective of their friend and colleague’s announcement.

“We’re going to leave it up to Rick,” said KMEM’s General Manager Mark Denney. “When he’s ready to announce, we’ll be ready, too.”

In the early days of KMEM, Fischer was among the handful of staff who helped the station get off the ground. Today only he and Staff and Promotions Director Dave Bowden remain, and they’ve got an immense amount of funny, or ironic, or tragic stories to tell. Thirty-six years in any business does that to a person. KMEM is as a part of their lives as their own families are.

It may have gone differently for Fischer. In his youth, he didn’t set out to work in radio. He had a much different plan for his life when he was in college.

“I never had visions of becoming a big star in any kind of motion pictures or anything, but I did have a vision of ending up in the theater somewhere. I auditioned for some things in the meantime. Those places I auditioned for were in Springfield, Missouri and The Little Theater of the Rockies out in Denver, Colorado and a major theatrical company out of the Twin Cities. And, they all liked what I did, but they didn’t, unfortunately, offer me a job,” said Fischer. “When I was in college I dabbled a little bit in radio, on KILJ in Mt. Pleasant, Iowa. I did a radio program for the Iowa Westland College. I actually majored in Theater and English.”

Fischer did work with the Toby & Susie Show, a comedic variety traveling tent show, for several seasons in the early 1980’s, but his position at the station kept him in the region. He didn’t expect to love his job as much as he did.

“I was home. I was unemployed. I was doing a lot of substitute teaching. One day, my sweet late mother Venice Fischer-Barclay, was looking at the Daily Gate City newspaper and she found a small story that said something like ‘Radio Station to Open in Northeast Missouri’. It told about Sam Berkowitz opening KMEM and that’s how I found out about it. I came up here to Memphis to talk to Sam. He interviewed me three different times. I did make it known that I was interested in a permanent job, if possible. At least until I got figured out what I wanted to do with theater. I never got it figured out. I realized when I started working here I loved this job. I loved the community,” said Fischer.

The walls and shelves in Fischer’s office are covered with mementoes, photos and awards from throughout his career. There are handmade wooden plaques from the Clark County 4-H Fair for every year he’s been the Master of Ceremonies, which he estimates he’s been doing for about 17 years.

There are clippings from The Media newspaper predominately placed front and center on the main wall he looks at, which includes a large framed tribute to the Clark County Indians Football Team’s 2008 win of the State Championship. On a shelf above his head sits an autographed Indians helmet from the same State Championship.

There are countless Rotary Club awards and University of Missouri Extension awards. He displays autographed photos of famous singers and bands including a picture of the Oak Ridge Boys, which has been signed by every member, and an autographed photo of Rhonda Vincent. There are a cluster of ceramic Santa Claus statues predominantly placed on a shelf. On the other end of the shelf, a wooden sign reads: Welcome to the Path Less Traveled.

On a cabinet sits a vintage framed 1974 Edina Sentinel advertisement for the Toby and Susie Show. The inscription on it reads, Mary Couch. She is a fellow thespian from the region and a Knox County native.

There are also photo tributes to his late friend and colleague Jim Sears, another original and well known KMEM staffer, who he still tells stories about – and lights up in the telling of those stories.
Jim liked to call him “Fish” and the two were always laughing and playing pranks on each other. Fischer and Bowden keep Jim Sears’ name in the air with their stories of the joker.

“On my worst day, Jim could still make me laugh,” said Fischer. “He used to hide under the desk and wait for me to start reading the news. He would light it on fire when I was reading it. I went to a commercial pretty fast and then I started stomping.”

“He would cut the lights off while we were reading the news,” said Dave Bowden. “He was always up to something.”

“We would come in and ask if he could tape me. I thought he was going to record me for a promotion or something like that. He would stand behind me and wait until I started reading the news and he would start sticking sticky notes to my glasses and my face,” said Fischer.

Besides having fun, Fischer and his colleagues were at the forefront of what KMEM was doing for rural communities in the region. They were the only grass roots rural station serving the area.

“I actually started in the fall of 1981. We started putting together the basics of the crew here at the radio station, but we did not go on the air until March 29, 1982. Boy, what an amazing time that was. At the time, people in this area had no daily source to turn to where they could get true local news from these smaller communities. There were stations in Keokuk. There were stations in Kirksville. But, basically there was nothing in the very center of our area. That’s how we became successful. We started right away with the main focus on news and sports. We kind of evolved from there.

“In the beginning things were different. We had automation. It was reel-to-reel and cart machines with 8-track cartridges. We could never get the carrousels matched up with when the breaks were with the reel-to-reel machines. Sam Berkowitz, in his wisdom, said one day, ‘Let’s just go live and play records.’

“We played what they called adult oriented music. It was kind of an odd mixture of current music. I can remember playing Madonna. You might play Madonna and then Willie Nelson would come up in the rotation. Some of the advertisers said ‘you need to go one way or the other’. We did a survey. Most of the people listening to us were 30 to 40-years-old and they liked country, so we started doing just country.

Fischer isn’t quite sure what he will do with himself after he retires on December 29, but he plans on staying active in the community.

“I’m retiring mainly for health reasons, but I’m not dying. People are going to see me around in the community,” said Fischer.
Rick Fischer, 59, was born in Kirksville. He grew up in Luray and Wyaconda, MO. He and his wife Teresa have one daughter, Pam (Wes) Jensen of Bloomfield, IA, two grandsons and two great granddaughters.

There will be a retirement reception at the radio station, 650 North Clay Street in Memphis, from 1:00 p.m. to 5:00 p.m. on December 29. The community is invited to come in, visit and wish him well.

This story was featured in the December 13, 2017 edition of The Edina Sentinel.