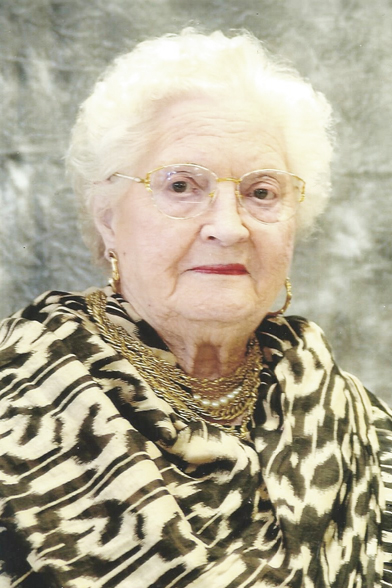 She was born August 18, 1919 in Gregory Landing, Missouri the daughter of Edward and Elsie Ort Otte.  On November 30, 1939 she was united in marriage to John Uhlmeyer at the St. Peter’s Catholic Church in Keokuk.  He preceded her in death on August 17, 1997.

She enjoyed playing cards, making rag rugs and laughing.  Most of all she loved spending time with her family and friends.

Besides  her husband she was also preceded in death by her parents, two grandchildren, Sheila Bourgeois and Timothy Kraus, one great grandchild, Kennedy Rose McNally, two sisters, Irene Smith and Dorothy Kirchner, one brother, Junior Otte, along with her in laws, Roy Smith, Lester Kirchner, Leo and Dorothy Uhlmeyer, Francis and Leota Ball and Lester Uhlmeyer.

Visitation will be held after 9 a.m. Friday at the Vigen Memorial Home in Kahoka with the family meeting with friends from 5 – 7 p.m. A rosary will be recited at 7 p.m.

Memorials may be made to the Kahoka Cemetery or St. Martha’s Catholic Church.