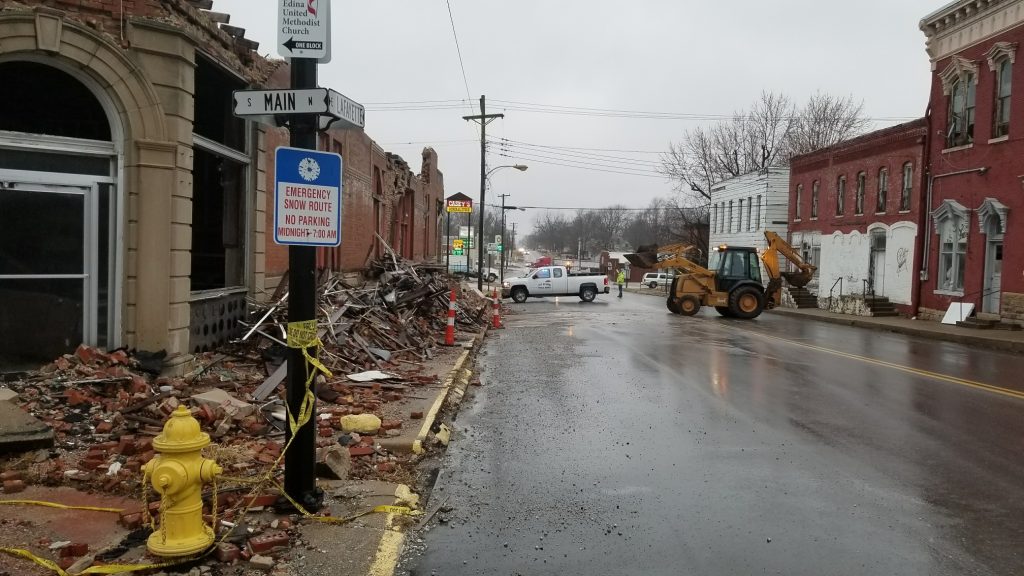 According to reports, on Monday morning, March 5, 2018, part of 100 South Main Street in Edina, MO, collapsed onto Highway 6 covering the east bound lane with bricks and debris from the partially demolished building.

According to Edina Police Chief Ryan Bishop, the call came in that the building had partially collapsed at approximately 7:25 a.m.

Chief Bishop, the City of Edina Superintendent of Utilities Joe Dimmitt and City Work Crew member Jason Bell were quickly on the scene to help the Edina Police Department direct traffic, which was down to one lane, and move the rubble off of the highway using a backhoe.

By 7:55 a.m. the rubble was pushed back toward the building and both lanes of traffic on Highway 6 were open.

This partial collapse came after a long period of rainfall, approximately 8 hours, in Edina.

The building is owned by Anita Woodburn of Birchtree, MO. An arrest warrant for Woodburn is still active. She is wanted for failing to maintain her building in Edina, which has caused an unsafe environment around it.

This is not the first time a chunk of the building has come crashing down. Bricks fell onto the sidewalk on the north side of the building, which runs along Highway 6, on May 31, 2016. The building was contracted to be torn down by Terry Feldkamp at that time, and the demolition process was beginning.

The building was partially torn down in the spring of 2016. It has remained an unsafe eyesore in Edina ever since.