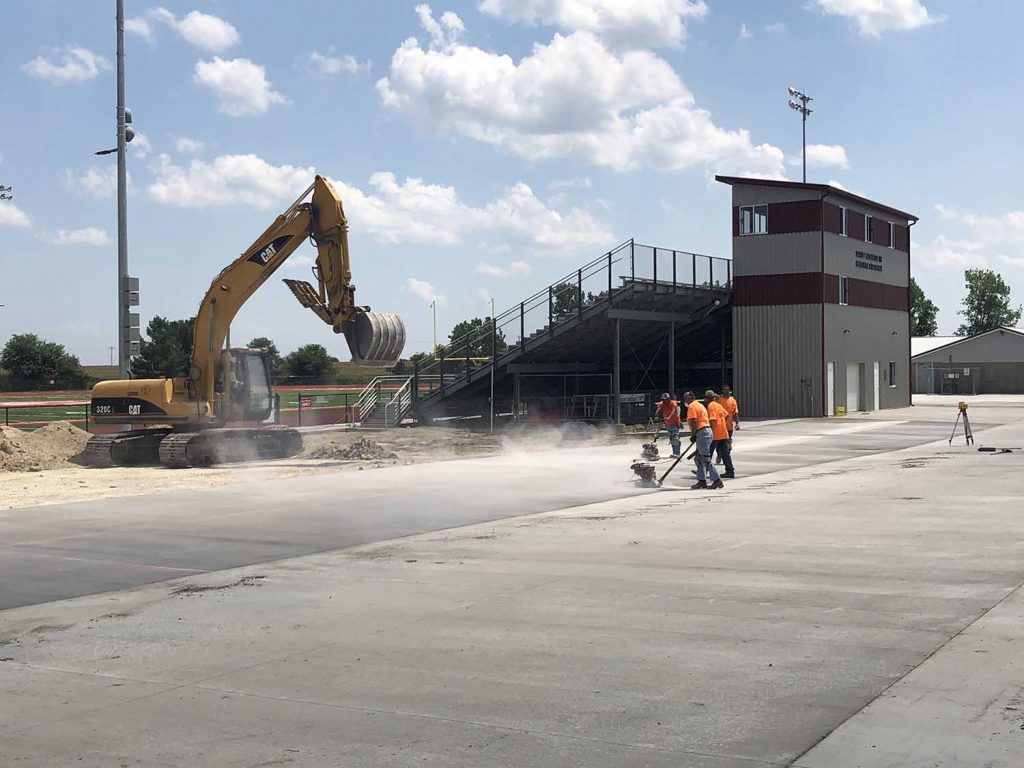 Work continues on the parking lot paving project near the football field.  The crews have had two recent incidents of hitting unmarked buried cables, causing problems for the school district. Despite that, the projecdt is on schedule to be completed this summer.

“Last week, the contractors were removing a large chunk of concrete near the press box,” said CCR-1 Superintendent Dr. Ritchie Kracht.   In the process, they pulled out the electrical wire that serviced the press box, locker room, and fitness center.

At their Thursday, July 12, meeting, board members approved plans to repair and upgrade the electric service.  The plan includes connecting to the three-phase power that was installed last year to power the scoreboard and lights, boring underground from that point to the locker room, replacing the transformer at the locker room, and upgrading to a 400 amp panel in the building.

“We have plenty of power available there.  We’re upgrading the panel because when there are big events like Parade of Champions, we blow a lot of breakers,” Kracht said.

The low bidder for the contract was 3rd Generation Electric, of West Point, Iowa, who are also doing the electric work at the new Indian Pride Learning Center.  Their bid was $15,490.  The expense for the boring will be $3500.

“They have been more than helpful to us.  We really appreciate all the work the city guys have done for us,” Kracht said.

The project will likely take about two weeks, because the material, such as the new transformer needs to be ordered.  The fitness center will remain closed to the public until repairs are made.

Kracht noted that all the new conduits are to be diagramed for future reference.

Other than those issues, Kracht said the paving is looking good, construction at the Indian Pride Learning Center continues to progress, and the Black Hawk security entrance has been started.

The board also heard from bus driver representatives Steve Howell and Rhonda Kirchner.  Last month, the board approved paid insurance for drivers that agreed to be trip drivers.   The drivers were concerned that if there weren’t enough trips for everyone each month, that they might lose their coverage.

“Last month you asked us to start working towards 100% insurance,” said board president Brad Sprague. “We are making steps and went way beyond what was asked, so I was disappointed in your letter that you thought that was “unacceptable”.  Our concern is that all the trips get covered.”

Board member Craig Hunziker added, “We can’t have two or three administrators out on the bus if something happens at school.”

Kracht used an example of fictional bus driver, Tom Smith.  “If Tom Smith puts his name on the list to be a trip driver, he’s eligible for the insurance.  When it’s his time to drive a trip, if he can get someone else to take the trip, that’s fine. But if not, he has to drive the trip.”

A meeting between administration and the bus drivers will be scheduled to discuss any issues and reduce confusion.

-Approved allowing the senior class to show movies on the scoreboard as a class fundraiser on August 10. More information will be released once the $550 license to show the movies is paid and received.

“Lunch is always going to go up,” Kracht said, noting the government raises what the schools must charge every year.

-Approved out-of-district tuition and activity gate fees with no change.